Dodge Hornet Name Is Back on a 268-HP Small Crossover 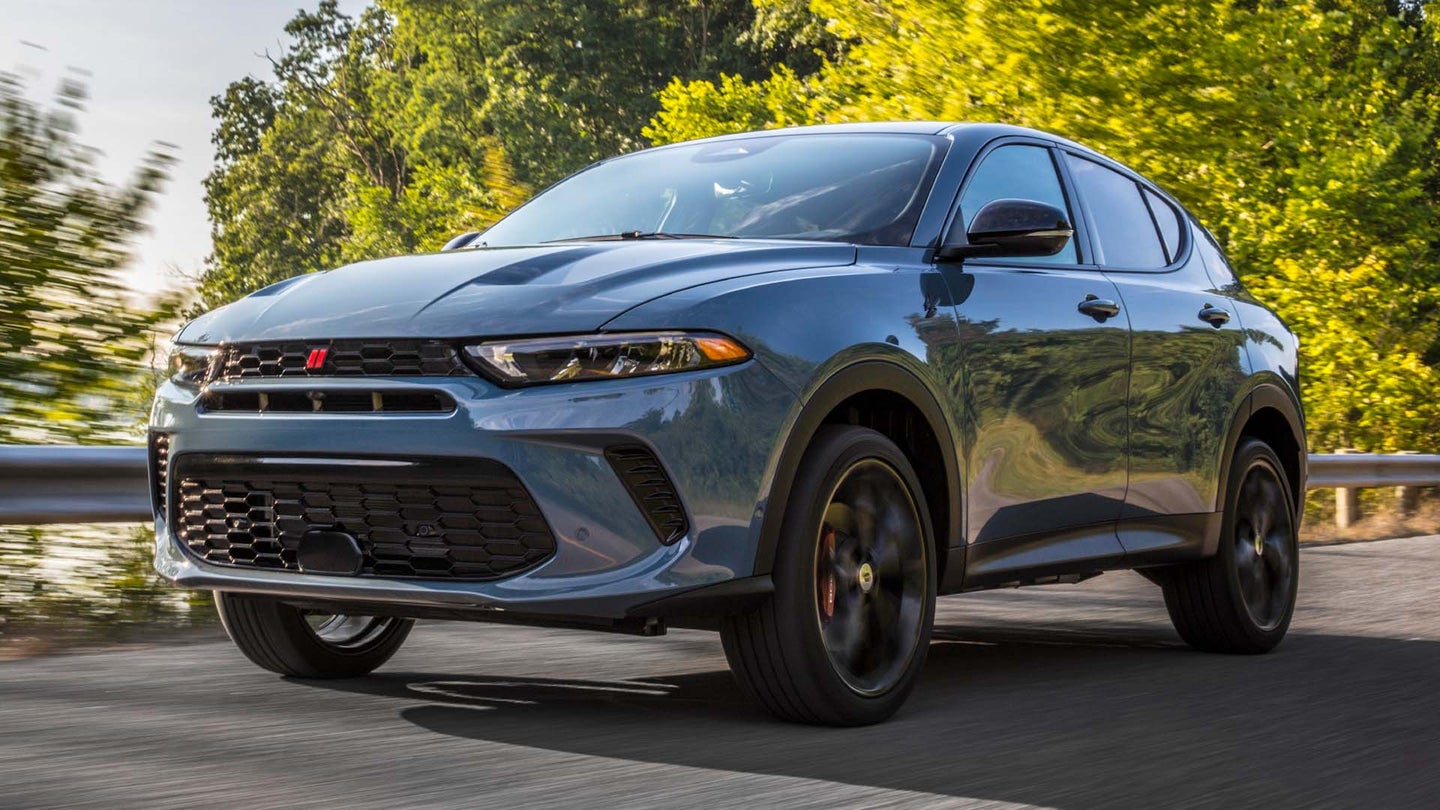 Dodge is entering the compact crossover market in typical Dodge fashion. No, I’m not saying that just because it’s recycling a platform—in this case, that of the Alfa Romeo Tonale—but because its new entry is loud and proud. It’s called the Hornet, and it’s the most powerful CUV you can buy for under $30,000. It’s also the angriest, in more ways than just its aesthetics.

In short, the Hornet carries five people and has three trims, all of which get torque vectoring all-wheel drive and four-cylinder propulsion. They each take a unique approach to comfort and performance, so it’s worth running through them one by one. I’ll start with the base model.

The Hornet GT is powered by a 2.0-liter turbocharged “Hurricane4” engine with 268 horsepower and 295 pound-feet of torque. It also gets a nine-speed automatic transmission. An electronic limited-slip rear differential contributes even more to its sporty feel, and Dodge claims it’s the “industry’s quickest, most powerful utility vehicle under $30,000.” It will hit 60 mph in just 6.5 seconds in sport mode, which enables “access to full power and torque.”

Like all the rest, the base Hornet packs fully independent suspension with frequency selective damping shocks from Koni. You can also spec the GT with dual-mode shocks, which get stiffer in sport mode if the vehicle is so equipped. Dodge is treating this like a real muscle car, and even though it might not look like one, it seems to pack respectable performance.

Heated seats, a heated steering wheel, wireless charging, and a 465-watt, 14-speaker sound system can all be found as well. There’s a GT-Plus trim that offers many of these features, and inside, there’s a 12.3-inch digital cluster and a 10.25-inch central display. Red interior stitching caps everything off to remind you that you’re not in some drab CUV; you’re in a Hornet, gosh dangit.

After that is the R/T, which packs a plug-in hybrid powertrain with a smaller 1.3-liter turbocharged engine and a six-speed automatic transmission. It features more than 285 hp and a massive 383 pound-feet of torque. Its electric rear axle is programmed to imitate an LSD, giving it the attitude and driving characteristics of a modern hot hatch.

Independently, the rear electric motor produces about 121 hp. It works together with a 44-hp starter-generator and a 15.5-kilowatt-hour battery to enable a zero-to-60 time of 6.1 seconds. The Hornet R/T also has an all-electric range of 30 miles, which can be completely replenished by a Level 2 charger in around two and a half hours, according to Dodge.

Maybe the coolest part about the R/T is its PowerShot function. When you pull back both steering wheel-mounted paddle shifters and floor the throttle, it unlocks an extra 25 electric horsepower. That sticks around for 15 seconds before requiring a 15-second cooldown. The R/T’s aforementioned 0-60 time is enabled by this feature, which reportedly shaves a second off the sprint, and you won’t find anything like it on the car’s closely-relating sibling, the Alfa Romeo Tonale.

The R/T’s hybrid drivetrain features regenerative braking to bolster the stamina of its battery. Three drive modes called Hybrid, Electric, and E-Save also help the driver get the most out of the system in terms of economy and performance. Hybrid is the standard driving mode that mixes electric power and gasoline grunt, Electric propels the car using only the single-motor rear axle, and E-Save prioritizes the use of the combustion engine in order to preserve electric range. Direct Connection stage kits will also be available on the R/T, although no details have been provided yet.

Brembo four-piston front fixed brake calipers are standard on the R/T to boot.

Finally, the third trim is known as the GLH, and those familiar with the 1980s-era Dodge Omni will know that stands for “Goes Like Hell.” It’s motivated by the same 2.0-liter Hurricane4 as the GT but it gets a higher, yet-to-be-specified amount of power. Dodge has confirmed, however, that it will have a greater power to weight ratio than the original GLH and performance stage kits will be available for it through the company’s Direct Connection catalog. Output will likely be in the range of 300 ponies because when you apply the original GLH’s power to weight ratio to the 3,715-pound Hornet GT, you get a figure of roughly 270 hp.

The GLH seemingly stands alone from the R/T, offering pure combustion performance. Details about which options and features will be available are a little unclear, but there’s an obvious focus on speed and aesthetics. The GLH gets exclusive 20-inch wheels while the GT is delivered with standard 17-inch alloys that can be upgraded to the R/T’s 18s. It also gets the most attention from Dodge’s Direct Connection catalog. An available suspension lowering kit will drop the car “more than an inch.” It also gets a specific dual exhaust which Dodge says is “unrestricted” and provides a “throaty performance note.” Engine performance stage kits are also available, and aesthetic changes like decals, blacked-out lower trim, and a slightly-altered lower rear fascia complete the picture.

In short, Dodge plans to shake up the CUV world. Thanks to its parent company Stellantis, it can take parts from other brands in order to create the most appealing package possible. The Hornet may share some parts like its door skins with the Alfa Romeo Tonale and look pretty familiar overall, but it will likely be priced well below that car. The only question now is whether or not Dodge’s V8-addicted audience will be onboard. Whether they are or not, the Auburn Hills automaker has certainly made the effort.

The post Dodge Hornet Name Is Back on a 268-HP Small Crossover appeared first on The Drive.