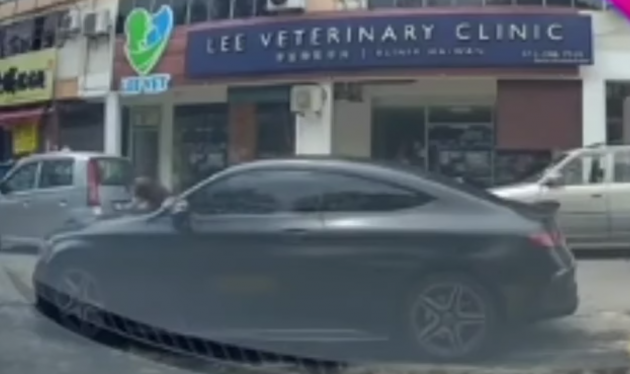 Here’s a scene some of us see everyday, double parking. Sometimes we’re blocked, sometimes we block – double parking is sometimes unavoidable at very busy commercial centres where actual parking slots are scarce, versus the amount of economic activity going on.

It’s not right, but if you absolutely have to double park for a short hop to the shop or bank, and the whole square is full, make sure that you at least leave your phone number on the dashboard (and respond when you get the call), and be alert to horn sounds – we’ve all seen unapologetic double parkers taking their own sweet time without an ounce of care that they’ve wasted the time of others.

In this video posted on the We are Malaysians Facebook page, a Mercedes-Benz C-Class Coupe driver is seen inching his way out of a parking spot in Kuchai Entreprenurs Park, which is partially blocked by a Perodua Viva. The black coupe manages to get out, and his female companion gets in the car. They speed off and the story ends. But the last part didn’t happen because the Merc driver just couldn’t contain his anger.

He steps on the gas but changes his mind. The man gets down and rips off the Viva’s number plate and throws it away. Presumably he did that because it’s the easiest form of damage one can do to another car. I’m sure many of us empathise with the angry man, because we’ve been in such rage before too, but this time, the Merc man couldn’t hold the fire in.

Yes, the double parking Viva is wrong, but two wrongs don’t make a right, and there are cameras everywhere these days. The video has since gone viral and it has come to the attention of the police. Brickfields district police chief Amihizam Hj Abdul Shukor released a statement yesterday to say that while the cops have yet to receive a police report on the matter, they will investigate.

The next time you’re blocked by someone and you’re filled with anger, keep a lid on it as there are cameras everywhere and you don’t want the cops to see you damaging property. Easier said than done, of course, but walk away we must. Double parkers, always leave your phone number, respond to calls/horns, and be quick.