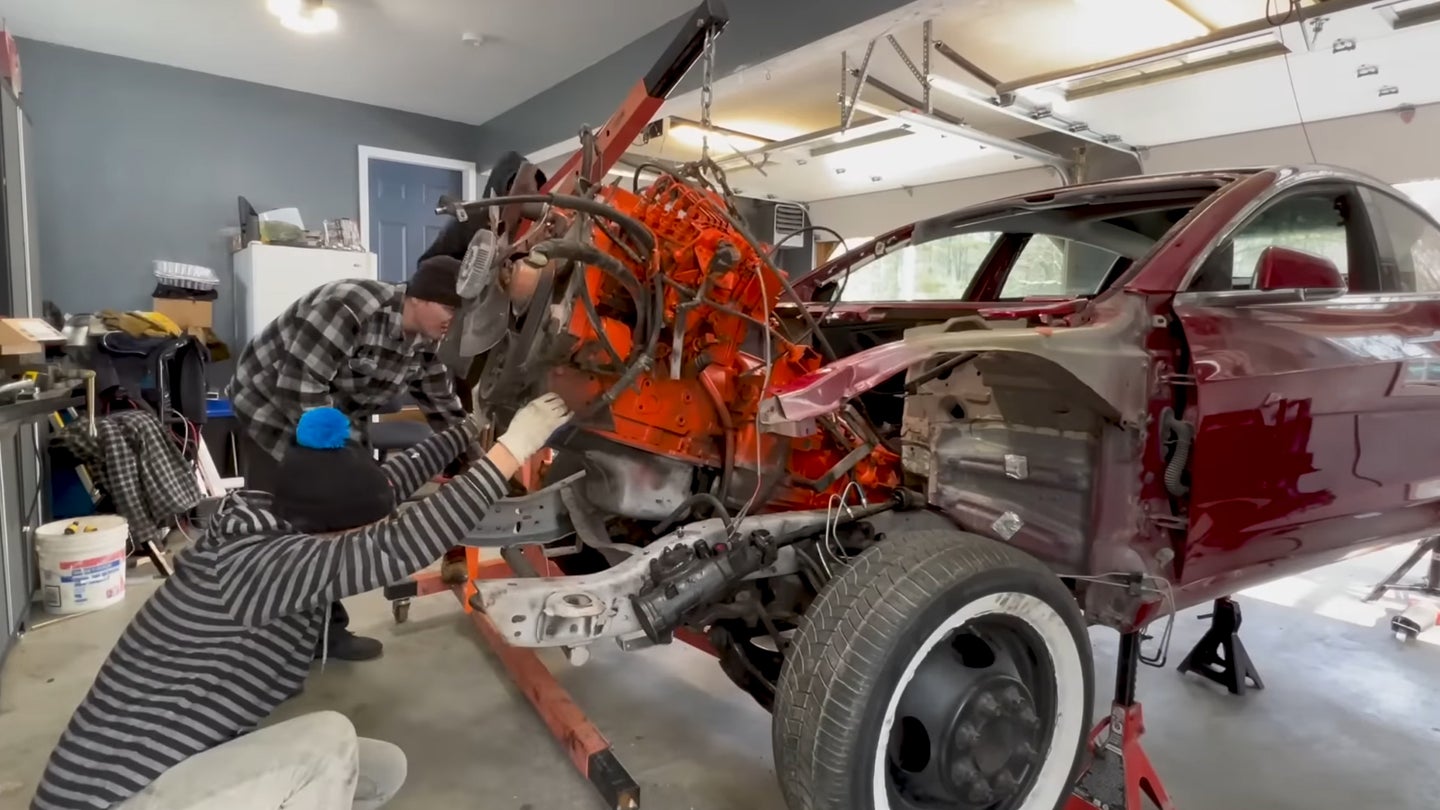 The world has seen a handful of Tesla-swapped cars over the past few years, but not as many combustion-swapped Teslas—and probably for a good reason. That hasn’t stopped YouTubers like Rich Beniot (better known as his online moniker, Rich Rebuilds) from building a V8-swapped Model S.

Since that success, Rich and his crew have embarked on a new adventure dubbed Model D. The team obtained a wrecked Model 3 last year and has been hard at work to transplant a Cummins 4BT diesel engine under the hood, and a dually axle at the rear. There’s just one problem, according to the channel’s latest video: a letter sent by the U.S. Environmental Protection Agency ordering them to stop building the Model 3 around the old diesel motor. But after some digging into the matter, it would appear that the letter may be nothing more than an elaborate troll meant to disrupt Rich’s project.

In his video, Rich says that the channel received a letter from the EPA advising that the channel not move forward with the project. While the letter reportedly wasn’t specific in the reasoning, nor did it include any potential violations the channel might be risking with the road use of the vehicle once completed, it did highlight the channel’s “social obligation to do the right thing” and not paint diesel in a bad light, according to co-host Steven Salowsky. Ultimately, it was pondered if the build violated the Clean Air Act since it was certified for road use and swapping in a pre-OBDII motor would mean that its current configuration would not comply with various emission regulations.

The letter was ultimately forwarded to the channel’s lawyer who advised Rich to comply with the request in order to avoid any potential with the EPA, especially given the agency’s recent war on diesel tuners and the channel’s previous interactions with the organization regarding its diesel builds. Rich has since pivoted to running the build on vegetable oil instead in order to satisfy the EPA’s odd request of keeping the diesel’s public image as clean as possible. Salowsky was unable to provide The Drive with a copy of the letter at the time of writing but did note that the channel questioned the legitimacy of the letter.

A spokesperson for the EPA told The Drive that it had “not issued any sort of letter or correspondence” to the channel, its hosts, or to the PO Box address listed on the channel’s website—meaning that Steven’s suspicions may be spot-on. The Massachusetts Department of Environmental Protection also told The Drive that they had not sent a similar letter.

Salowsky says that the channel gets a lot of weird stuff sent to their PO box. While they had a feeling the letter may be a fake, the team was baffled why anyone would go through that sort of effort to forge an official letter in order to sabotage a video. He did make a potential connection to previous abuse against the channel in 2020 when Tesla fans mass-reported a video regarding Rich’s decision to sell his Tesla in favor of a gas car until the video was removed from YouTube several times but says that this type of letter does nothing to but actively work against the channel’s work to promote the need for the right to repair.

“It’s not like we’re trying to troll anybody,” Salowsky assured The Drive. “Model D is the same premise as ICE-T. Nothing has changed. Two years have passed and Tesla will not sell us a powertrain. If anything, [the EPA] should focus on the fact that Tesla’s sustainability means not selling replacement parts and rather having a car go to landfill.”