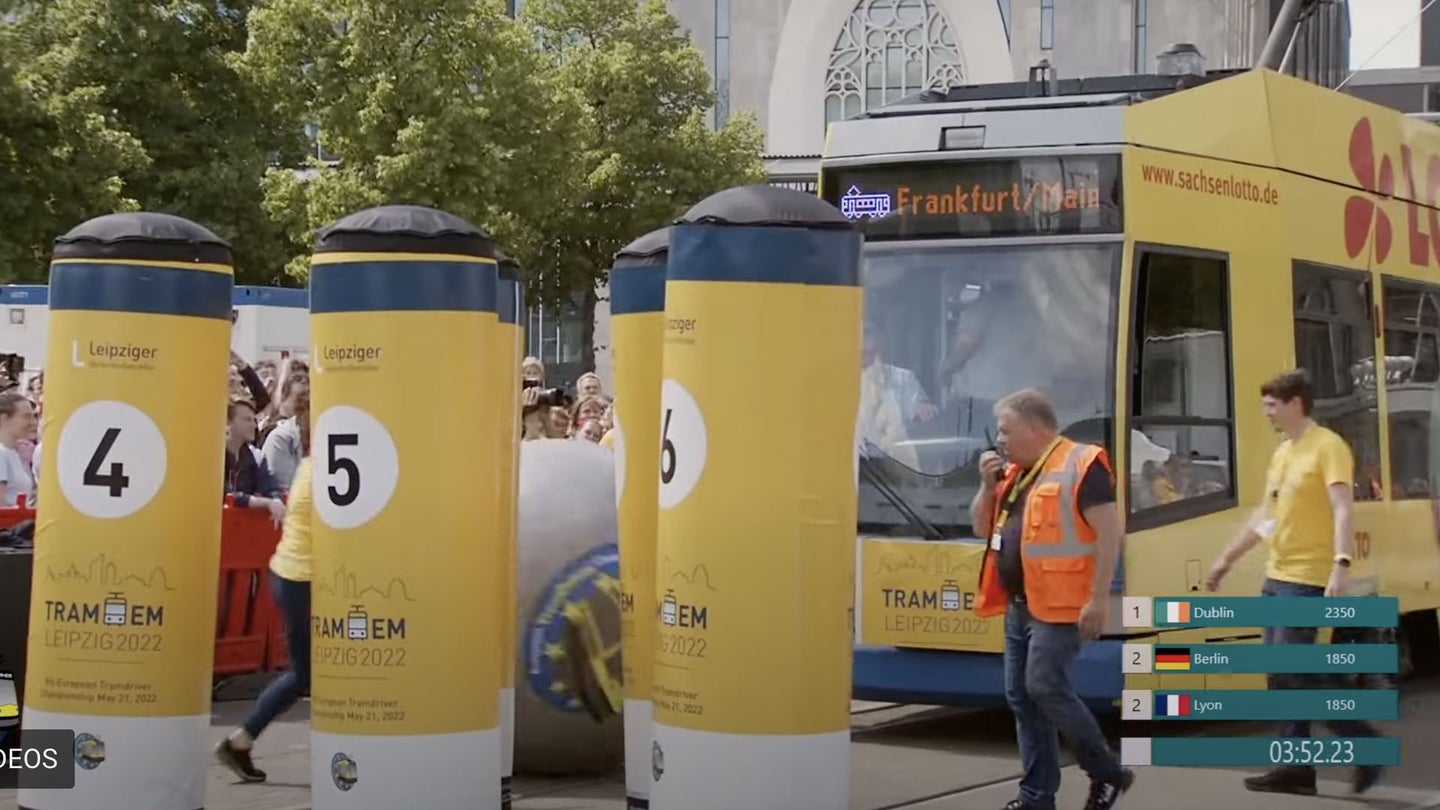 Trolleys hitting things generally isn’t good. In fact, it has a name: the trolley problem. But rejoice public transportation enthusiasts, because there’s a way to watch people do things with trolleys, and knocking things into other things is the point. The prize? Being named Europe’s best trolley driver.

Leipzig, Germany, hosted May 21 the 2022 European Tramdriver Championship, or TRAM-EM. The international competition pits teams from various cities across Europe of two trolley drivers (one man and one woman, like Extreme E) who share driving duties over two competitive runs of the same course. (Also, strangely, like Extreme E.)

Unlike Extreme E, TRAM-EM is very much on-street racing. Using the trolleys of its host city, teams rush between different cars to complete challenges including how fast they can emergency brake the trolley, how accurately they can stop it on a mark and, err, how good they are at using it to nudge a billiards cue.

(There’s a long history of slightly—or very—absurd international competitions in Europe like It’s A Knockout, a sort of costume party crossed with a game show that was meant to promote European unity and understanding and mostly led to Belgium becoming the No. 1 enemy.)

Competitive trolley driving might look funny Stateside, but believe me when I say we take this absolutely seriously over here and that the teams competing had been training for weeks.

This was the ninth running of TRAM-EM, which started in Dresden, Germany in 2021. You can watch highlights of the competition here if you’d like to see a video edited in such a stereotypically European way.

The 2012 running was won by Budapest’s tram network, which was the host in 2013. In the history of the competition, only one host city has ever proven to be a home advantage, with Brussels’s transport system both being the site of 2019’s championship and the victor. It’s been a long two years without TRAM-EM, however, due to the same problems challenging every sport since the global coronavirus pandemic and so trolley enthusiasts everywhere were pleased to see it back in 2022.

This year, Hanover, Germany—a town sort of near Volkswagen’s home base of Wolfsburg—took the top spot. Their team members were particularly good at the precision stopping tasks, collecting massive points hauls. Ukrainian cities Kyiv and Lviv were also competitive and 2018 champions, Stockholm, put forward a major challenge. Hanover, however, was basically unbeatable and so the team gets to walk away with the knowledge it has the best trolley drivers in Europe. Until the 2023 competition in Oradea, Romania, at least.