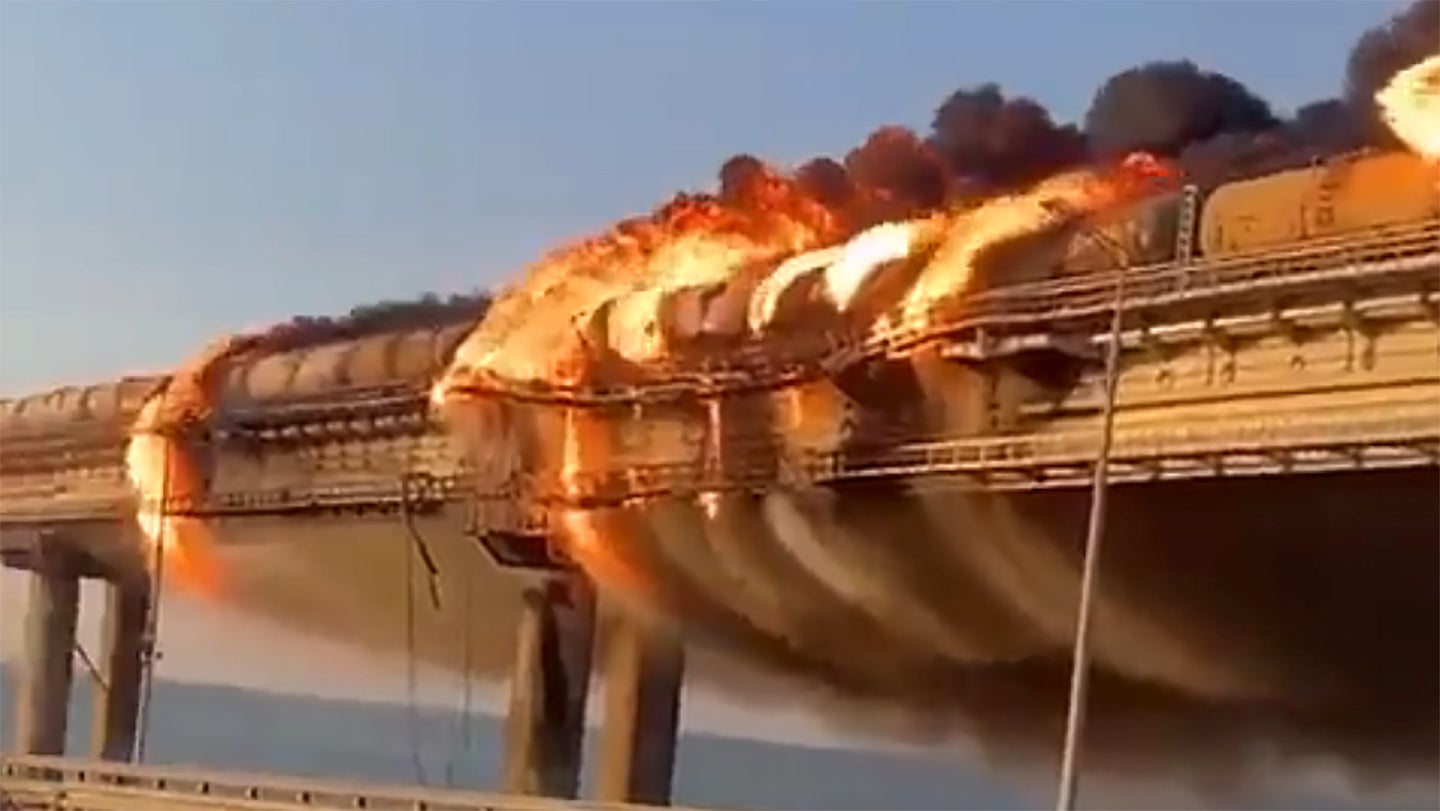 A massive fire is burning on the Kirch Strait Bridge that connects Russia to Crimea Saturday morning, with images showing multiple train cars fully engulfed and two spans of the road bridge in the water.

Traffic on the bridge, a critical strategic artery for Russian forces in Crimea amid its war in Ukraine, has reportedly been halted as heavy flames and black smoke spew from a train carrying unknown cargo. Photos also show spans of both east and westbound lanes have collapsed into the water near the burning train.

The bridge cost billions to build after Russia seized Crimea in 2014 and has been one of Ukraine’s top targets, although it lacked traditional weaponry capable of striking it from far away. Even the Pentagon has openly stated that it sees the bridge as a viable target for Ukrainian forces. Russia has deployed air defenses and decoy barges in an attempt to protect it from some kind of attack in recent months.

While this explosion could be an accident, it would be an incredibly convenient one for Ukraine and a catastrophic and embarrassing one for Russia.

We will continue to update this story as more information comes available.

The damage is severe to the highway span and it looks like the rail span will drop soon with the fire raging around the train.

Traffic on the bridge has been suspended, the Russian RIA Novosti news outlet said on its Telegram channel, citing a road administration official.

A parking lot with water and toilets has been set up in Kerch for vehicles unable to cross the Crimean Bridge, authorities said, according to the Telegram page of TASS.

“Traffic on the Crimean bridge is completely closed, the launch of a ferry across the strait is being prepared,” the KerchINFO Telegram channel reported, citing Crimean authorities said.

RIA Novosti blamed the blast on a fuel tank fire and are acting like its not a big deal because the arches aren’t damaged:

“A fuel tank, according to preliminary data, is on fire on one of the sections of the Crimean bridge,” according to RIA Novosti. “The shipping arches are not damaged, the adviser to the head of the Crimea said.”

There can be no doubt that this is a massive blow to Russian logistics for this war. That bridge was a critical link for the war effort. It has been taken out when Russia is supposedly starting a surge of forces with the risk to Crimea now being a very palpable thing. Whatever the cause, it is a huge development.

The Kerch Strait bridge is also a symbol of Russian power that was supposed to cement its seizing of Crimea. It cost billions to build and was a major source of pride. This is an absolutely massive shift in optics.