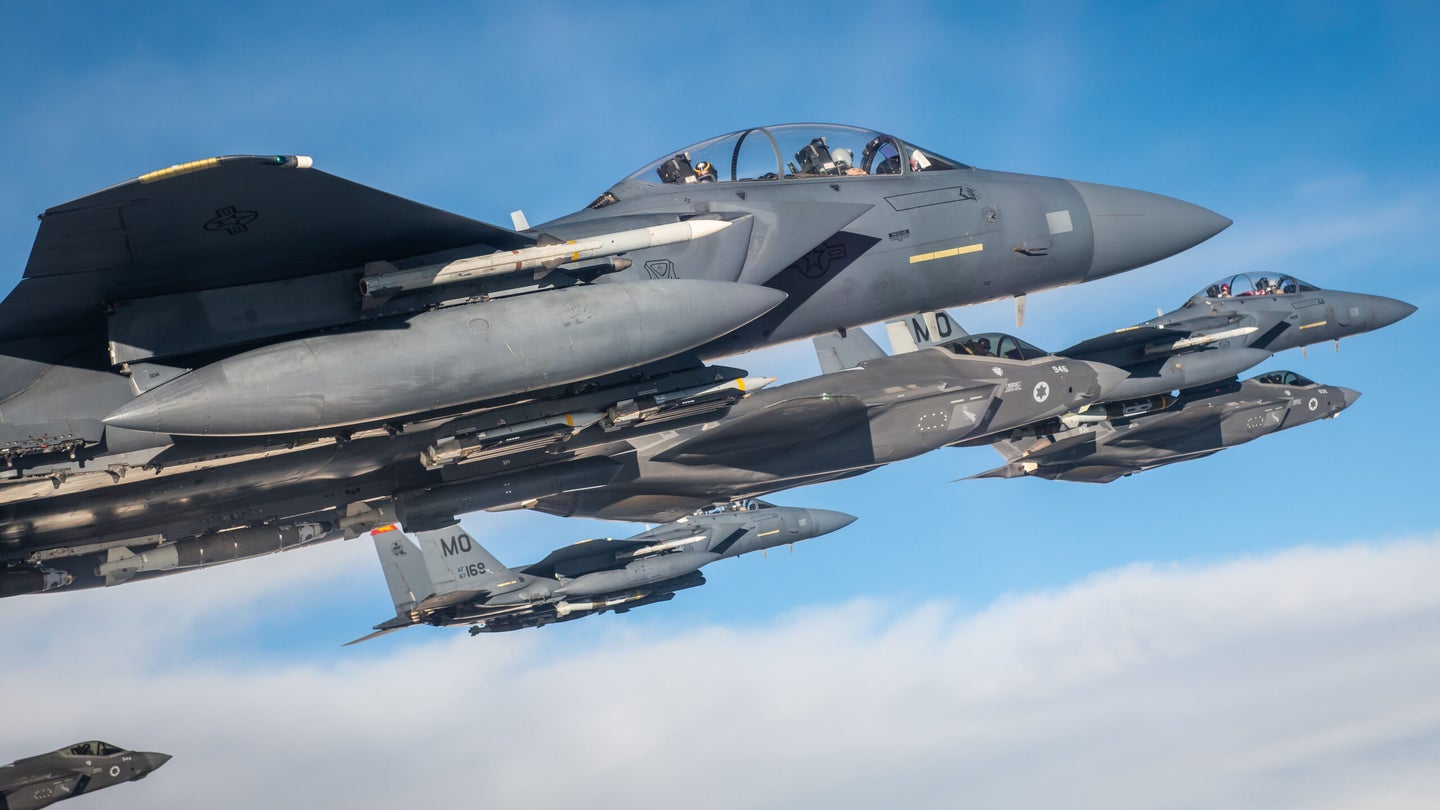 Joint exercises are a fairly regular component of the close relationship between the U.S. Air Force and Israeli Air Force (IAF), although it’s much rarer to see the aircraft involved in these drills carrying full loads of live armament. That was the case during the photo sorties that accompanied a bilateral U.S.-Israeli exercise over the Eastern Mediterranean earlier this week, focusing on fighter integration and refueling operations, according to the U.S. Air Force.

The exercise itself took place on November 29 and 30.

What’s especially interesting about the accompanying photos, however, is that the four F-15Es are fully armed. While we have seen IAF fighters carrying live armament while escorting U.S. Air Force bombers in the recent past, it’s uncommon for U.S. fighters to be seen carrying live munitions during maneuvers with the IAF.

The Strike Eagles in question are from the 389th Fighter Squadron, the “Thunderbolts,” part of the 366th Fighter Wing at Mountain Home Air Force Base, Idaho. The jets are seen carrying Joint Direct Attack Munitions (JDAMs): both 500-pound GBU-38/B and 2,000-pound GBU-31/B versions, as well as GBU-39/B Small Diameter Bombs (SDBs) on BRU-61/A quadruple racks.

The JDAM is a precision guidance kit that can be added to a wide variety of different dumb bomb types and which consists of a tail assembly with an inertial navigation unit, GPS receiver, and moving fins to direct it to the target. Another set of strakes around the body of the bomb makes it more stable as it glides toward the ground.

Later versions of the JDAM can also add a laser guidance package to deal with moving targets. It appears that some of the 500-pound weapons loaded on the jets are indeed GBU-54/B Laser JDAM versions.

At least one of the 2,000-pound GBU-31/Bs appears to be mated with a bunker-busting BLU-109/B warhead, or similar. The standard BLU-109/B has approximately 530 pounds of explosives packed inside and can break through four to six feet of reinforced concrete.

The SDB was designed from the outset as a low-collateral-damage weapon and also one small enough that multiple examples can be carried, boosting the ‘magazine depth’ of fighter aircraft. SDB provides a standoff ‘fire and forget’ precision attack capability, again using inertial and GPS guidance. Depending on launch height and speed, the SDB can hit fixed targets as far as 60 miles away.

With such an overt display of firepower (we don’t know what, if any weapons the four F-35Is were carrying in their internal stores bays), it’s perhaps not surprising that the IAF has been unusually explicit about the kinds of threats that the two air forces were training to fight against.

On its Twitter account, the IAF said that the exercises “simulated various scenarios in the face of emerging threats in the region.” It added that “these exercises are a central part of the strategic cooperation, which is increasing between the two armed forces in the face of the common challenges in the Middle East, led by Iran.”

Oddly, the official statement from the IAF said that F-16I Sufa jets, optimized for long-range strikes, were also involved in the maneuvers, although the photos provided show only the F-16C Barak variant. The U.S. Air Force statement also suggests its own F-16s took part, together with KC-10s, although these are also absent from available imagery. At the same time, the U.S. Air Force press release does not mention the KC-135, which certainly did participate.

The availability of tanker support was clearly crucial to the objectives of the exercise, namely practicing scenarios for long-range operations. Exactly these kinds of missions would be required for any potential IAF strike against Iran.

The IAF continued: “As part of the maneuvers, the Intelligence Division carried out a large-scale exercise that simulated a campaign against Third Circle countries and tested the capabilities of gathering, researching, and ‘generating’ targets and making intelligence accessible to the operational forces.”

The so-called Third Circle is also an explicit reference to Iran, part of a wider military doctrine that refers to the three levels of direct threats facing Israel. The first circle comprises militant groups on Israel’s borders, such as Hamas, while the second circle is occupied by larger threats, including Syria and Hezbollah. Finally, the third circle contains hostile countries that do not share a border with Israel — most notably Iran.

Earlier this year, the Israel Defense Forces ran a much larger and more complex exercise, Chariots of Fire, which also focused on long-range missions against a more sophisticated enemy, such as Iran. Reportedly, scenarios included attacking high-value and heavily fortified targets, which would be representative of the Iranian leadership, command and control, and even ballistic missile facilities. As well as IAF long-range strike assets, supported by tankers, the exercise involved special forces and cyber components.

What was different about Chariots of Fire, however, is that — despite some Israeli media reports to the contrary — the U.S. Air Force did not provide refueling support for the simulated attack on Iran, a spokesman for U.S. Central Command told The War Zone. You can read more about that here.

With the IAF’s tanker fleet already stretched very thin and with its aging 707s awaiting replacement by KC-46 Pegasus aircraft, the ability of the U.S. Air Force to provide additional aerial refueling is of significant value. Whether this would translate to direct tanker support of an Israeli operation directed against Iran would depend entirely on the broader political situation, but even contributing tankers in a training capacity is of huge benefit.

While the Israeli side was notably open about Iran being the potential foe in this latest exercise, the U.S. military offered much more carefully worded explanations of its involvement.

“This bilateral exercise demonstrates CENTCOM’s [U.S. Central Command] commitment to regional security,” said U.S. Army Gen. Michael “Erik” Kurilla, commander of CENTCOM. “CENTCOM routinely demonstrates the ability to rapidly insert combat airpower into operations and exercises with our partners, and our ability to do the same across all domains decisively is a powerful deterrent.”

An accompanying statement from the 9th Air Force referenced America’s “ironclad commitment to Israel’s security” and noted that AFCENT “will continue to work with its Israeli Air Force counterparts to continue strengthening our interoperability and enhance collective tactics, techniques, and procedures.”

Overall, exercises of this kind are only likely to increase in regularity, given the ever-closer military relationship between the United States and Israel. This was solidified earlier this year with the signing of a Joint Declaration on the U.S.-Israel Strategic Partnership in Jerusalem. In advance of this, Israel was officially moved to within CENTCOM’s area of responsibility.

At the same time, there are clear indications that Israel wants the United States to be more involved in the planning for the kind of operations that could be directed against Iran and its proxies. During a visit to the United States last week, Aviv Kochavi, Chief of General Staff of the Israel Defense Forces, said that the militaries of the two countries should accelerate joint plans for offensive actions against Iran, in particular, according to The Times of Israel.

Kochavi also said that joint activities with the U.S. military in the Middle East would be “significantly expanded” in the future.

At the same time, military cooperation between Israel and several Arab nations in the region is also expanding. Frank McKenzie, the retired Marine general who commanded CENTCOM until April, told The War Zone that Israel and Arab countries were moving toward creating a system to share information about Iranian missile and air defense threats to the region.

As a backdrop to all this are President Joe Biden’s efforts to resuscitate a nuclear deal with Iran, something that Israel strongly opposes. For its part, Israel has sought recent assurances from the United States that it would prevent Iran from obtaining nuclear weapons, by military means if necessary. Right now, however, nuclear talks with Tehran are stalled and the focus is very much on the ongoing civil unrest in Iran.

As Iranian protesters increasingly make clear their desire for change, it’s hard to predict what the regime in Tehran might do next. However, with support from the U.S. Air Force, the Israeli Air Force is set to continue to train for a range of potential contingencies involving Iran.

The post F-15Es Brandish Live Munitions During Drills With Israel Aimed At Iran appeared first on The Drive.