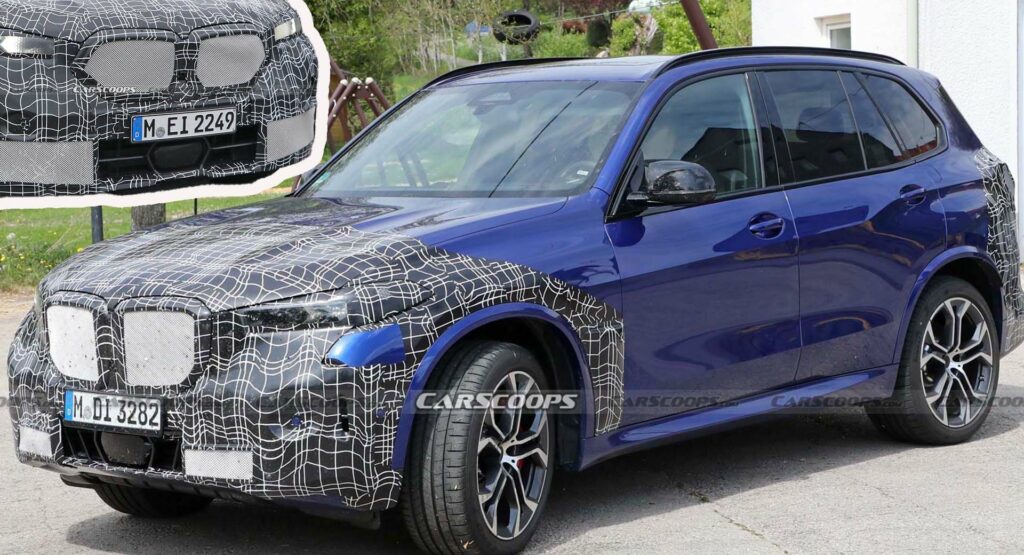 Stealthiness has long been embedded in the DNA of most BMW M cars, or at least the four-door cars like the M5 and X5 M. Sometimes it can be hard to spot a fully-fledged M model from a lesser M50i model, or even a car with an M Sport package and a wheel upgrade at first glance.

But it looks like buyers of BMW’s facelifted X5 M-lite will be out of luck if they’re hoping other road users will mistake their ride for an X5M. Our earlier spy shots showed the real M with slimmer, almost diamond-shaped grille kidneys, but unless these images show a very early prototype, it looks like its littler brother sticks with the squarer grille shape that will be used on regular X5s.

That fact that this lightly disguised development car still has mesh camouflage over its grille centers, however, suggests BMW will give it a unique grille vane treatment to help the M60i stand out from the X5s both above and below it in the model lineup.

Every model, regardless of M Division’s level of involvement, will get a set of slimmer headlights, but these appear to be regular light units. Judging from what we’ve seen in spy shots the X5 won’t switch to a split light arrangement like the X7, which features DRLs on top and the real light unit mounted below, partially hidden in a bumper recess.

BMW hasn’t confirmed the M60i name, but given the old X7 M50i was upgraded to M60i status with its facelift, we’ve every reason to think the same thing will happen here. There’s more to the change than simply a bigger number though. We expect the M-junior’s 523 hp (530 PS) twin-turbo 4.4-liter V8 to adopt the same 48 V mild hybrid technology that engine has in BMW’s other recently refreshed cars. Driving all four-wheels though an eight-speed automatic transmission, the engine should be slightly more efficient than the one it replaces.

Other changes include a new quad-tailpipe finisher, revised rear light lenses, an a re-profiled bumper to match the new one at the pointy end. But one of the biggest changes comes inside, where the X5 M60i, along with every other X5, benefits from a new widescreen digital dashboard display incorporating a virtual gauge pack and large touchscreen featuring BMW’s latest iDrive8 software.