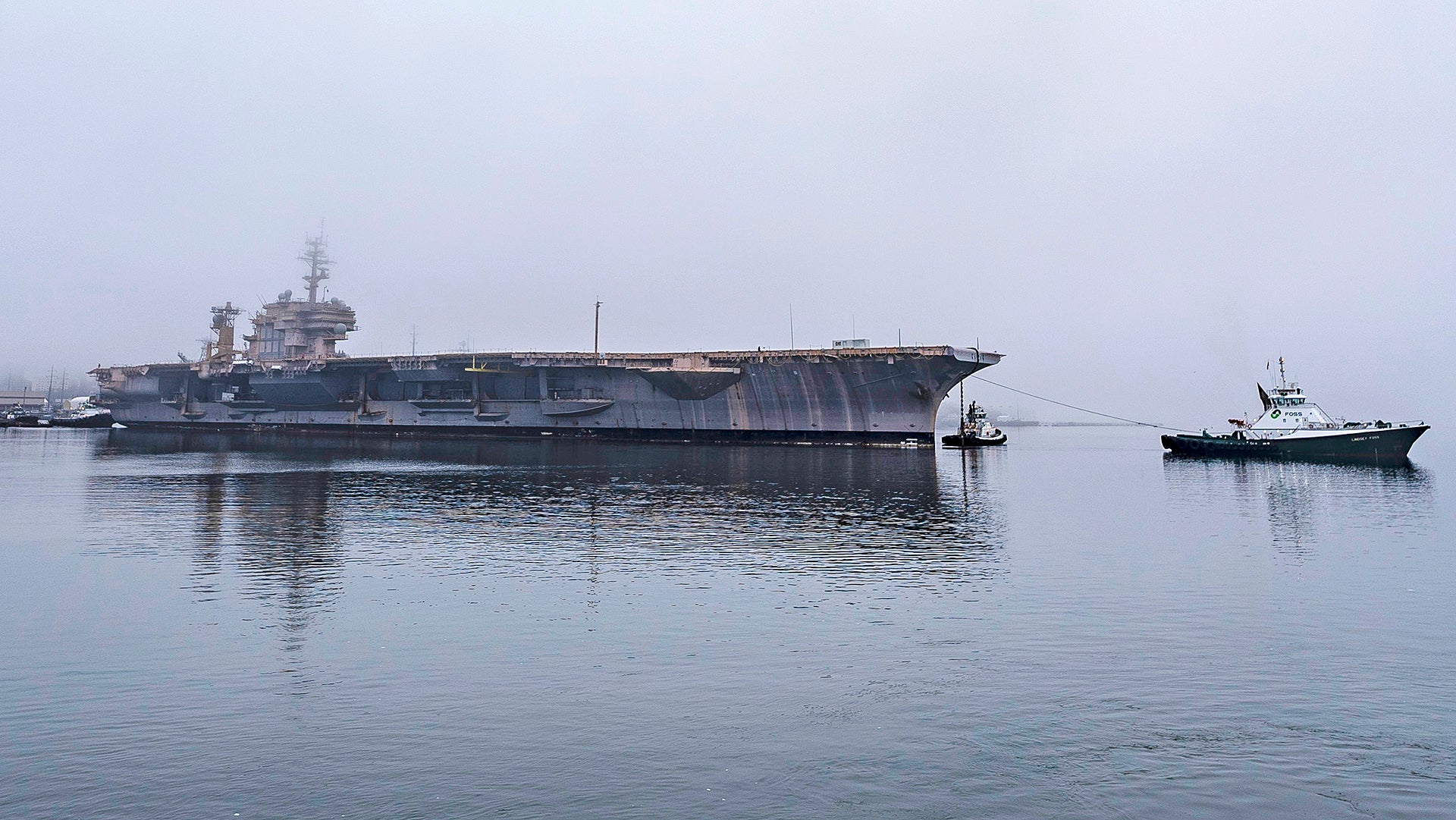 The former USS Kitty Hawk (CV-63) has embarked on its final journey, headed for scrapping at a ship-breaker’s facility in Texas after being sold for just one cent. The historic conventionally-powered carrier is taking a long voyage to its final destruction — rounding the South American continent since, at over 280 feet wide, it’s too large to pass through the Panama Canal.

The Kitty Hawk’s roughly 16,000-mile journey began on January 15, when it departed a foggy Naval Station Bremerton in Washington state. Nicknamed the “Battle Cat,” the carrier was maneuvered out of the harbor by tugboats, which will eventually bring it to Brownsville, Texas, for scrapping, via the Strait of Magellan, which forms a natural passage between the Atlantic and Pacific oceans. The entire voyage could take upward of 130 days. The Kitty Hawk was sold together with USS John F. Kennedy (CV-67) — which is in a subclass of its own and represented a slight improvement over the Kitty Hawk design — for the same once-cent price tag.

U.S. Navy/Communication Specialist Seaman Kyle D. Gahlau
The USS Kitty Hawk (CV-63) and other American and Japan Maritime Self-Defense Force ships transit together at the end of the maritime component of the U.S.-Japan exercise Keen Sword in the Philippine Sea in 2007.

Ahead of this, the Kitty Hawk underwent a process of hull-cleaning in dry dock at Puget Sound Naval Shipyard, to remove marine life. After this procedure, the requirement to move the carrier to Texas became more urgent, since the ‘biofouling’ would return before long, requiring further attention. Due to environmental concerns, and an agreement with the local Suquamish Tribe, it was not possible to undertake the same anti-fouling treatment in Bremerton.

QUILLC VIA WIKIMEDIA
The ex-Kitty Hawk seen at the Puget Sound Naval Shipyard and Intermediate Maintenance Facility in 2017.

“As hard as life was on this ship, it’s part of my history,” Navy veteran Corey Urband told the Kitsap Sun. “While most people were graduating from high school and college, I was 30 feet below the waterline, halfway around the world from home,” he recalled, reflecting on his time as a machinist’s mate on the carrier.

Urband was among the thousands of officers and enlisted crew who operated the Kitty Hawk at any given time. While the three carriers in the class, of which Kitty Hawk was the lead ship, were a significant improvement over the Forrestal class vessels, Kitty Hawk, Constellation (CV-64), and America (CV-66) — as well as the unique John F. Kennedy (CV-67) — were eventually eclipsed by the Navy’s nuclear-powered supercarriers, starting with the one-off USS Enterprise, and then the prolific Nimitz class.

Nevertheless, the Kitty Hawk featured some novel features, including escalators for the crew, one forward and one aft, and possibly a third escalator to take high-ranking officers between the lower decks and the ship’s bridge. You can read more about this unusual system in this previous article.

You can read all about what it was like serving aboard the Kitty Hawk in this past special feature of ours.

When completed, the Kitty Hawk cost $264 million in 1961 money, equivalent to around $2.5 billion in 2021. The carrier’s hull had been laid by the New York Shipbuilding Corporation in 1956 and was commissioned in 1961 at Philadelphia Naval Shipyard.

Two years later, in 1963, “Battle Cat” was involved in the first of a series of experiments that involved launching the U-2 spy plane from a carrier deck.

Thereafter, the Kitty Hawk saw combat service during Vietnam, receiving the Presidential Unit Citation for action during the Tet Offensive. In 1972, while on Yankee Station off the coast of North Vietnam, racial tensions aboard the ship spilled over into a riot, injuring as many as 60 sailors. The incident led to the UPWARD (Understanding Personal Worth and Racial Dignity) program, an early action to raise racial awareness, promoted by Admiral Elmo R Zumwalt.

U.S. NAVY
USS Kitty Hawk, then classed as an attack carrier, CVA-63, steams in the Pacific Ocean in July 1969.

During a dramatic incident in 1984 the Kitty Hawk collided with a surfacing Victor I class nuclear-powered attack submarine in the Tsushima Strait, a channel of the Korea Strait, between Korea and Japan. The Soviet submarine was thought to be damaged and left a piece of its propeller embedded in CV-63’s hull, later made into a souvenir. At the time of the collision, the two vessels are thought to have been armed with several dozen nuclear weapons.

U.S. Navy
An aerial port side view showing the top of the sail of a Soviet Victor I class submarine underway in the operating area of the USS Kitty Hawk Task Group in 1984.

Despite the pre-eminence of the nuclear-powered Nimitz class, the Kitty Hawk continued to give good service throughout the 1990s, including in support of Operation Restore Hope off Somalia in 1992.

In 1998 the carrier began its tenure as the Navy’s forward-deployed carrier in Yokosuka, Japan. The Kitty Hawk took over this duty from USS Independence, which was decommissioned, leading the “Battle Cat” as the service’s oldest active-duty warship.

By 2008, the Kitty Hawk was still forward-deployed in Yokosuka and was the only conventionally powered carrier still in Navy service. A year later, CV-63 was decommissioned and put into mothballs in Bremerton.

U.S. Navy
The USS Kitty Hawk transits the Pacific Ocean returning to the United States for decommissioning after 47 years of service, 10 of which were in Japan.

At one point, thought was given to bringing the Kitty Hawk out of mothballs to help the Navy meet its target of a 355-ship fleet. While this would have required extensive renovations, the then head of Sea Systems Command, Vice Admiral Thomas Moore, earmarked Kitty Hawk as being a better candidate than most for reactivation: “Of the carriers that are in inactive force, probably Kitty Hawk is the one that you could think about.”

While there was no reprise for the carrier, with such an illustrious history behind it, there had been hopes from some quarters that the Kitty Hawk would be preserved as a museum ship. This never came to fruition. Being the last conventional carrier that could have been donated, the likelihood that a supercarrier will ever become a museum ship appears to be very slim now. After all, keeping an oil-fired vessel for public display is a far more realistic proposition than a nuclear-powered warship. In fact, by most accounts, doing so with a nuclear carrier would be near impossible. Even disposing of them after their service lives end is set to cost huge sums of money.

As it stands, the Kitty Hawk will soon pass into history, but her memory will live on among the hundreds of thousands of sailors that called her home during her impressive 47 years of service.