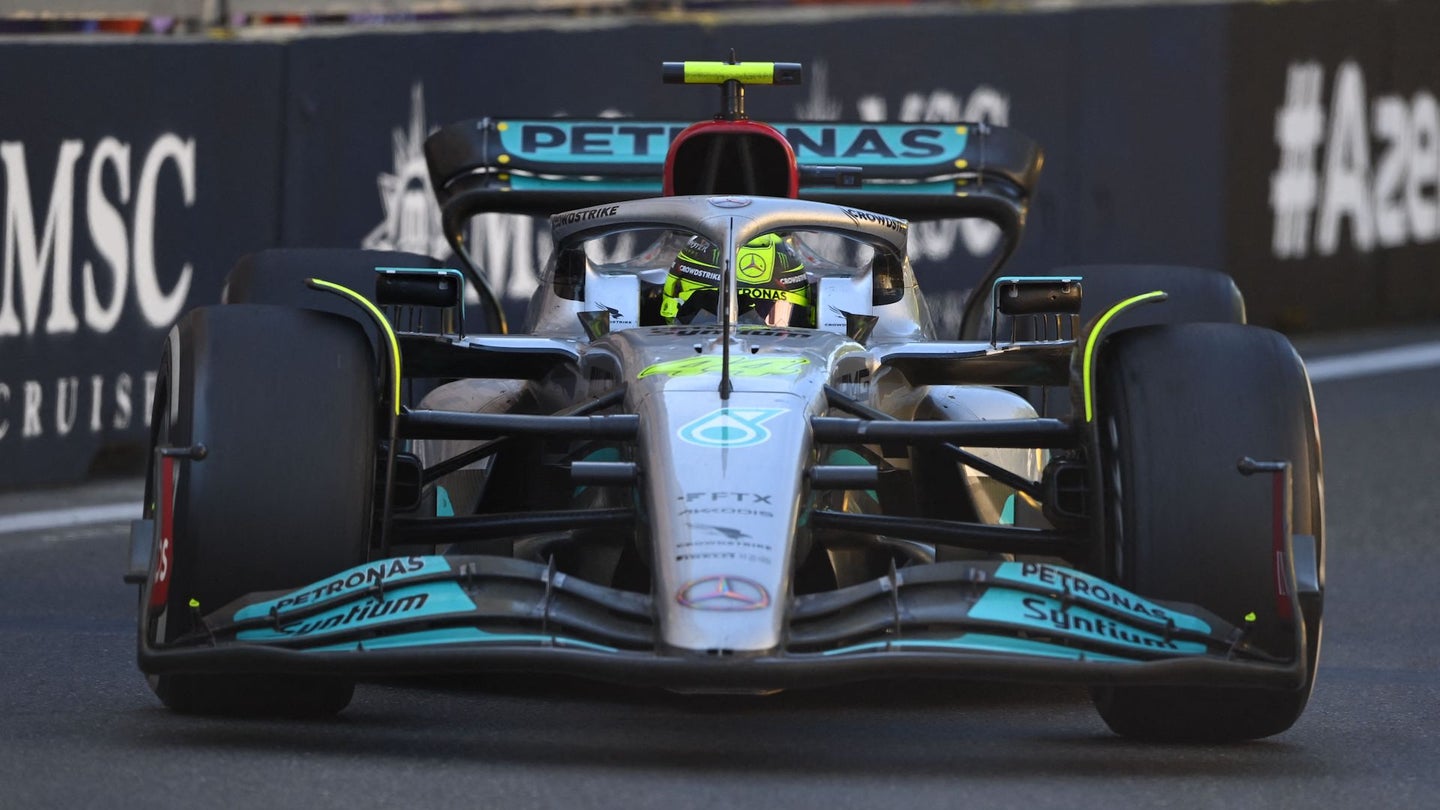 The FIA issued technical directive TD039 Thursday afternoon regarding the so-called porpoising phenomenon, which it claims has had an effect on the physical condition of Formula 1 drivers. The Federation stressed that it’s issuing this directive on the grounds of safety, as many racers have claimed to suffer from severe back pain during and after a race due to the violent bouncing motion of the car—most recently Mercedes’ Lewis Hamilton in Baku.

TD039 is not a solution for porpoising, but rather a sort of mandate telling the teams that they must find a solution to this safety issue or risk consequences. Furthermore, and as Auto Motor Sport explains, the FIA is also setting parameters to monitor porpoising levels in the cars, which involves establishing a range of acceptable vertical oscillations and forces inflicted on the drivers each race weekend. Should a car exceed that preset limit it would be considered unsafe and ultimately be disqualified.

“Following the eighth round of this year’s FIA Formula One World Championship, during which the phenomenon of aerodynamic oscillations (“porpoising”) of the new generation of Formula 1 cars, and the effect of this during and after the race on the physical condition of the drivers was once again visible, the FIA, as the governing body of the sport, has decided that, in the interests of the safety, it is necessary to intervene to require that the teams make the necessary adjustments to reduce or to eliminate this phenomenon,” read the press release.

What those limits will be is still unknown, as the FIA claims to still be in the process of analyzing the specific mathematical formula for the vertical oscillations metric, and did not give a timeframe for when it’ll be finalized. It did, however, invite the teams to contribute to the process.

No new rules regarding porpoising will be in effect for the Candian Grand Prix this weekend, as the FIA will mostly focus on gathering data for the directive’s further execution. Higher scrutiny of the plank and skids will be in effect, however, most specifically to their wear throughout a driving session.

Hypothetically speaking, once the directives are in place, if a car were to get too close to the established limit it would have several options. One, it could make suspension adjustments to help counteract the vertical forces. Two, it could adjust the ride height to keep the car from bottoming out under aero load. Or three, alter the design of its components in order to alleviate the situation. The FIA will rely on data from sensors in the car and in the drivers’ wearables, so keeping things hidden won’t be a possibility even for drivers (or teams) willing to sacrifice their own health for a spot on the grid.

The FIA is strongly playing the safety card with TD039, not only because it’s applicable, but because it wants to cover its bases against the likes of Red Bull Racing, who believe the porpoising issue is up to the teams to fix and not for the FIA to meddle with. For this reason, it cites drivers and even their own doctors who claim that the forces they’re being subjected to can have dangerous consequences.

“The FIA has decided to intervene following consultation with its doctors in the interests of safety of the drivers,” reads the FIA press release. “In a sport where the competitors are routinely driving at speeds in excess of 300km/h, it is considered that all of a driver’s concentration needs to be focused on that task and that excessive fatigue or pain experienced by a driver could have significant consequences should it result in a loss of concentration. In addition, the FIA has concerns in relation to the immediate physical impact on the health of the drivers, a number of whom have reported back pain following recent events.”

While a solution is likely still a few GPs away, if not longer, this is a step in the right direction on behalf of the FIA. While not all teams suffer from porpoising and some have done a better job than others at mitigating it, it’s never a good sign to have drivers visibly struggle to exit their cars at the end of a race. F1 cars are the most advanced racing machines in the world, and their safety characteristics should reflect that—not just their performance.

The post FIA to F1 Teams: Fix Porpoising or Risk Disqualification appeared first on The Drive.