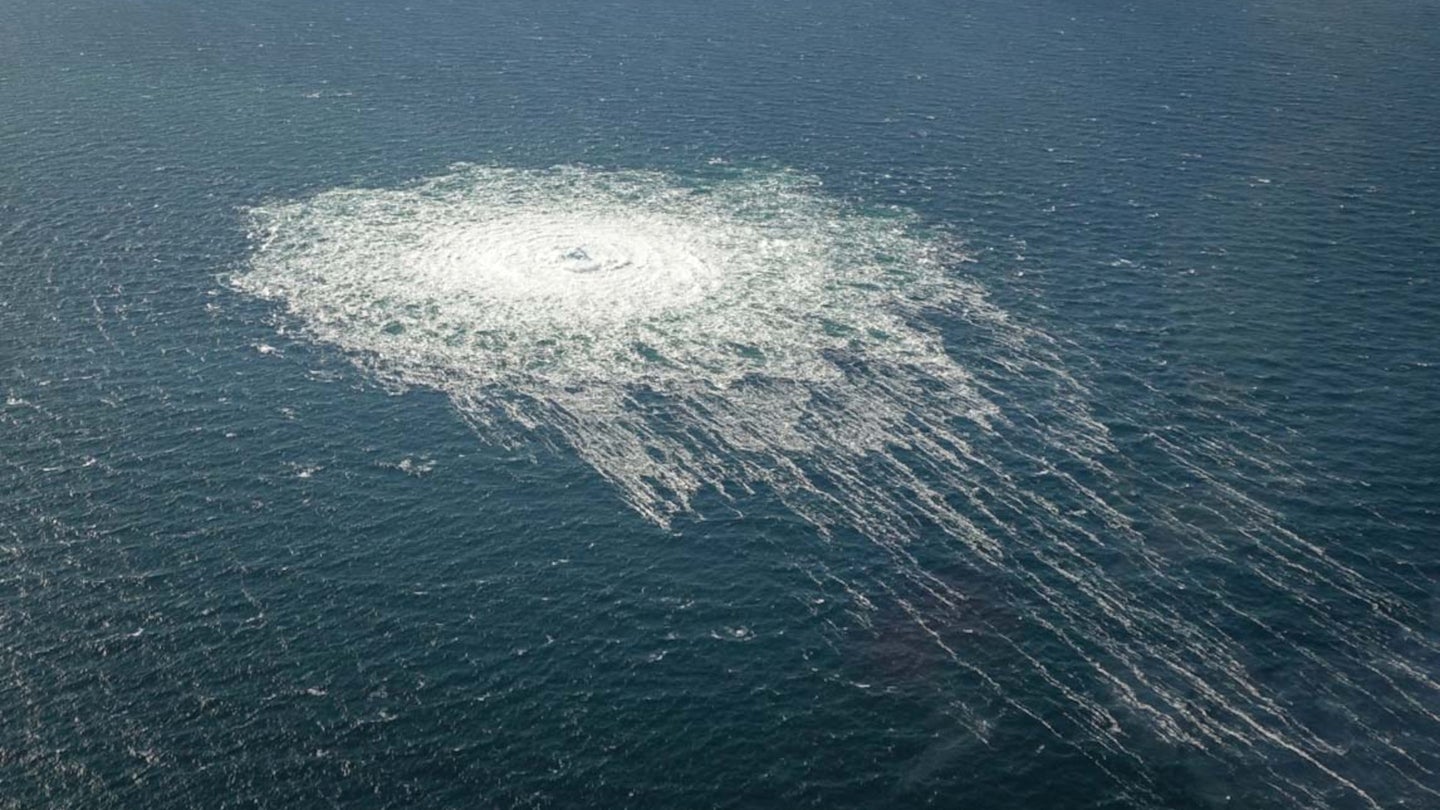 Rumors and speculation continue to swirl around a series of blasts that significantly damaged two major underwater pipelines in the Baltic Sea designed to carry natural gas from Russia to Europe yesterday. The European Union has now joined a growing chorus of government officials, as well as experts and observers, saying the explosions were all but certainly the result of some kind of deliberate attack. A British media report today indicated that officials in that country are increasingly convinced that the Russian government is responsible, possibly using uncrewed underwater vehicles to plant explosives. Readers can get up to speed first on what is already known about these incidents in The War Zone‘s initial reporting here.

The first reports that something was amiss came earlier this week, when at least three separate gas pipeline leaks were detected in the Baltic Sea. Two of these were traced to portions of the Nord Stream 1 pipeline, which has been in use since 2011. The other was found to be coming from Nord Steam 2, which was finished last year, but has not yet started normal operations. All three leaks are in international waters, but are within areas that Denmark and Sweden claim as part of their Exclusive Economic Zones (EEZ). Danish authorities subsequently established a five-mile maritime exclusion zone, as well as a smaller no-fly zone, around the leaks.

It later emerged that seismic monitoring stations in the region had detected a number of apparent explosions in areas where the leaks had occurred, immediately pointing to the possibility of sabotage or some other form of attack. One of these blasts created a force equivalent to a magnitude-2.3 earthquake, according to the Swedish National Seismic Network.

“The European Union is deeply concerned about damage to the Nord Stream 1 and 2 pipelines that has resulted in leaks in the international waters of the Baltic Sea,” Josep Borrell Fontelles, the European Union’s (EU) High Representative for Foreign Affairs and Security Policy, said in a statement today on behalf of the entire economic bloc. “All available information indicates those leaks are the result of a deliberate act. We will support any investigation aimed at getting full clarity on what happened and why, and will take further steps to increase our resilience in energy security.”

A number of investigations appear to be underway, including at the national level in specific countries, such as Sweden. The German Navy is supporting at least one of these efforts in an unspecified way.

“Any deliberate disruption of European energy infrastructure is utterly unacceptable and will be met with a robust and united response,” Borrell’s statement added, but without describing any specific potential courses of action that the EU might pursue.

With the exception of Russia, all of the countries with borders on the Baltic Sea are EU members. Except for Russia, Finland, and Sweden, they are all also NATO members, and the latter two nations are in the process of joining the alliance.

At the time of writing, no EU member appears to have officially alleged that any specific actors may have been responsible for these apparent attacks, though officials in a number of countries within the bloc have made statements similar to Borrell’s. The U.S. government has also shied away from attributing responsibility so far, though it has come to similar conclusions. Pentagon Press Secretary Air Force Brig. Gen. Pat Ryder said today that the U.S. military is sharing pertinent information with its allies about the “apparent acts of sabotage.”

For its part, the Kremlin has denied any involvement, with Putin’s personal spokesman, Dmitry Peskov, saying today that speculation that Russia was behind the leaks was “stupid.” Peskov offered no further information or counter-accusations.

There are entirely unsubstantiated conspiracy theories, which Russian state and non-state actors are amplifying, circulating already that the U.S. government, or other actors working in cooperation with it, were responsible. Spreading misinformation and disinformation, or enabling their spread, are common Russian government tactics to deflect attention from its own malign activities.

These insinuations have been based in part on the presence of a U.S. Navy amphibious assault ship, the USS Kearsarge, and a P-8A Poseidon maritime patrol plane, among other assets, in Baltic Sea around the time the leaks were reported. The U.S. military routinely operates in the region and has publicly stepped up its presence as part of efforts to bolster NATO’s posture in light of the war in Ukraine. No hard evidence has been put forward to link American forces to the pipeline incidents in any way.

A remark from President Joe Biden in February before Russia’s all-out invasion of Ukraine that the Kremlin’s increasingly hostile actions toward its neighbor could lead to there “be no longer a Nord Stream 2,” has also resurfaced. There is no indication whatsoever that this was anything but a comment on the potential diplomatic pressure the U.S. government would exert on German authorities to at least freeze that specific pipeline project, something that very publicly happened.

All this being said, there are indications that Western intelligence agencies are increasingly of the view that the Russian government, or actors acting on its behalf, was responsible for the pipeline leaks. The Times newspaper in the United Kingdom, citing an unnamed U.K. “defense source,” reported today that a “likely scenario” for the attacks involved Russian uncrewed underwater vehicles, deployed from a mothership vessel of some kind on the surface, possibly something as innocuous as a fishing boat. Those undersea drones would then have laid explosive devices along the Nord Stream 1 and 2 pipelines.

According to The Times story, the explosives could have been planted weeks or even months ago as part of a “premeditated and planned” operation. This detail follows a separate report from the German magazine Der Spiegel yesterday that said the U.S. Central Intelligence Agency (CIA) has passed along warnings to authorities in Berlin about the possibility of future attacks on Nord Steam 1 and 2 this past summer.

Experts and observers have also put forward the possibility of combat divers planting explosives. The leaks occurred in areas where the pipelines lie at sufficiently shallow depths for divers to operate.

Russia’s military and intelligence agencies certainly have the capacity and expertise to execute such an operation. Russia is known to operate a fleet of highly specialized submarines, including very large mothership types capable of discreetly carrying midget submarines very close to specific target areas, as well as a variety of uncrewed and remotely-operated underwater vehicles. Typically, the large nuclear-powered special mission motherships have not operated in the Baltic.

The Russians have a number of equally specialized surface vessels that can conduct various kinds of deep-sea operations, including salvage. Discussions about these assets typically focus on concerns about Russia’s ability to tap or even potentially cut undersea communications cables, but the same capabilities that enable those kinds of activities could easily be employed to plant explosives or otherwise launch destructive attacks on other undersea infrastructure.

Regardless, the full scale and scope of the impacts from the apparent attacks on Nord Stream 1 and 2 very much remain to be seen. Western Europe, as a whole, faces an increasingly critical energy situation as winter approaches, something the Russian government sought to exploit as an indirect response to crippling sanctions from the EU and others over its invasion of Ukraine.

Russian state-owned gas company Gazprom had already stopped the flow through Nord Stream 1, ostensibly citing maintenance issues, in August. Construction of the initial components of Nord Stream 2 was completed last year, but, as already noted, the final certification of the pipeline was first halted by German authorities after the Kremlin recognized two breakaway regions of Ukraine as independent countries. The project was frozen indefinitely after Russia subsequently launched its all invasion of its neighbor. Despite all this, residual gas was present in both pipelines.

A report from German outlet Tagesspiegel today said that authorities in that country are concerned that Nord Stream 1 and 2 could effectively be rendered unusable forever as a result of the apparent attacks. If repairs cannot be conducted quickly, saltwater corrosion, among other factors, might leave the pipelines so damaged that fixing them becomes prohibitively expensive.

At the same time, European countries have been actively working to decouple themselves from Russian energy resources for months due to the current geopolitical climate. Just yesterday, Danish and Polish authorities inaugurated a new Baltic Sea gas pipeline.

The apparent pipeline attacks will very likely prompt increases in various countries’ security postures, as well. Norway, an EU and NATO member that does not have a Baltic Sea coastline, announced today that its military would be increasingly visible around its offshore gas and oil installations in light of both the Nord Stream incidents and separate reports of concerning drone activity. Norwegian Prime Minister Jonas Gahr Stoere said that any attacks on its energy infrastructure would be “handled jointly with our allies.”

There is also simply the matter of the environmental impacts from the leaking gas in the Baltic. More than half of the 778 million cubic meters of natural gas that remains in both Nord Stream pipeline networks at the time of the incidents has leaked out already, according to Danish authorities. Those same officials said that this amount of gas escaping into the atmosphere represents a volume of pollution equivalent to 32 percent of Denmark’s total annual CO2 emissions.

What actions EU or NATO members, within their respective organizations or individually, may be prepared to do if formal accusations are leveled against Russia over the Nord Stream incidents is unclear. Similar questions have been raised in the past about what the response might be to a state actor like Russia cutting undersea cables.

As already mentioned, Russia is already subject to extensive Western economic sanctions, and any more direct response would carry at least some risk of escalation. This all comes at a time when concerns have already been growing over whether or not the Russian government may seek to pursue some kind of escalation, even including the use of nuclear weapons, in response to steady losses to Ukrainian forces.

Of course, if Russia is conclusively determined to have been responsible, the situation has already escalated to a significant degree.

The post Fingers Point At Russia In Baltic Undersea Pipeline Attack appeared first on The Drive.