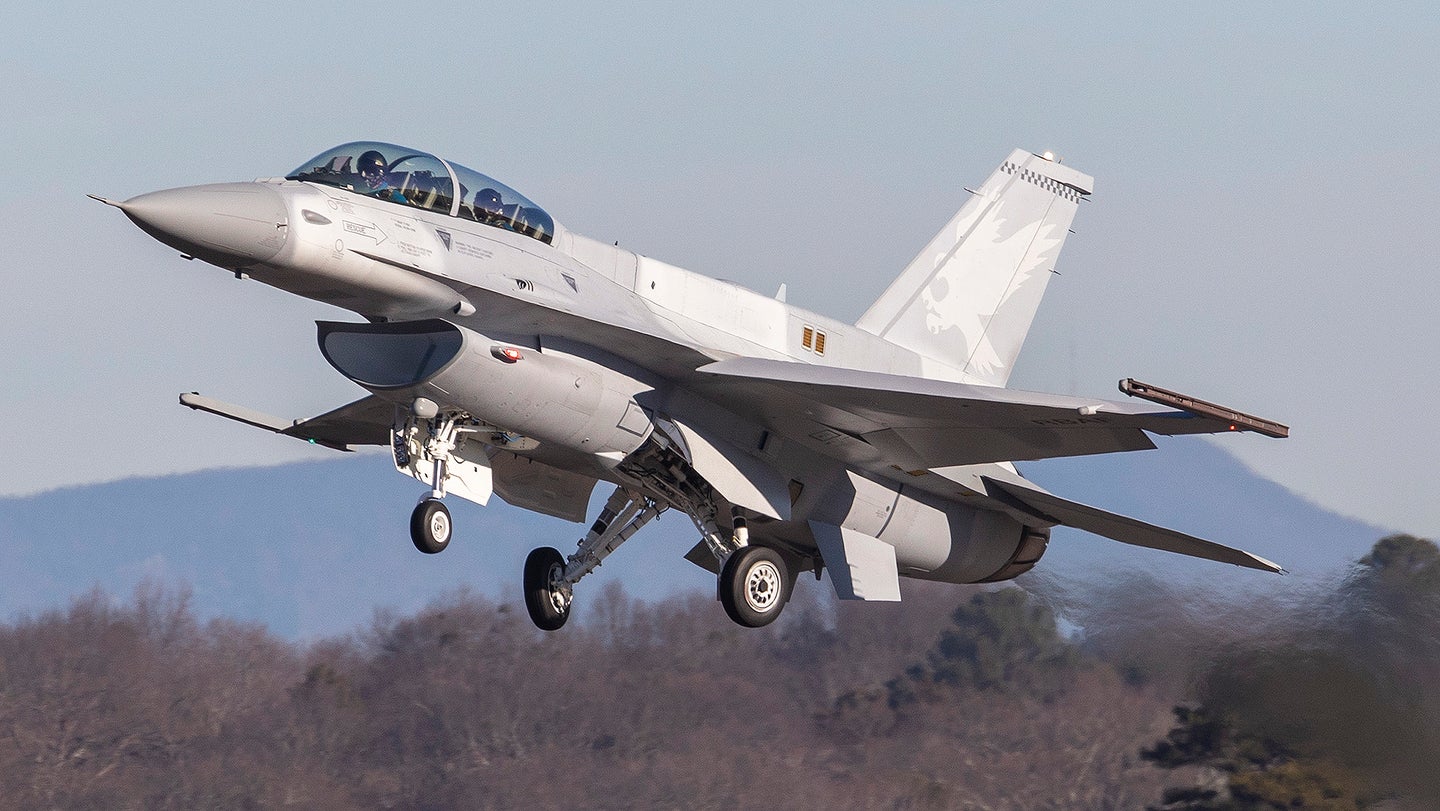 The first new-build F-16 Viper in the advanced Block 70 configuration has completed its maiden flight. The milestone is especially significant as it represents the first time an F-16 built on Lockheed Martin’s new production line in Greensville, South Carolina has flown.

The inaugural flight comes two months after we got our first look at the new-build jet, which is a two-seat ‘big spine’ model. According to a company press release, the flight took place on Jan. 24 at 9:17 a.m. and was flown by Lockheed Martin test pilots Dwayne ‘Pro’ Opella and Monessa ‘Siren’ Balzhiser, who is the company’s first female test pilot. Total flight time was approximately 50 minutes, and the overall sortie is said to have included a variety of airworthiness tests, like engine, flight control, and fuel system checks, as well as basic aircraft handling.

“Today’s successful flight is a testament to the hard work, dedication, and commitment to our customers and their missions,” said OJ Sanchez, Vice President of the Integrated Fighter Group at Lockheed Martin, which includes the F-16 program. “This milestone demonstrates Lockheed Martin’s commitment to advancing this program and getting this much-needed aircraft and its advanced 21st Century Security capabilities to the warfighter.”

At the time, customers for new F-16s were declining, but the facility move and a number of outside circumstances, including huge geopolitical shifts, prompted a surge in interest in advanced new-build F-16s. The facility currently has a backlog of 128 jets on order.

You can read all about the South Carolina Viper production line and the Block 70/72 configuration in this article of ours.

Of those 128 Block 70/72 F-16s, 16 of them have been ordered by Bahrain, including the aircraft that flew today. Once completed, the Bahraini F-16 will first be handed over to the U.S. government sometime this quarter, then undergo flight testing at Edward’s Air Force Base, and then be delivered to the customer.

The remaining Block 70/72 F-16s in Lockheed Martin’s backlog are set to fulfill orders for Slovakia, Bulgaria, Taiwan, and an additional unspecified customer, Lockheed Martin said. However, the company does expect another 12 to be ordered by Jordan. The press release adds that Jordan last year signed a Letter of Offer and Acceptance (LOA) for eight Block 70 jets and then last week signed an additional LOA for four more.

Bulgaria has also signed an LOA for eight additional jets, which would bring Lockheed Martin’s backlog to 148. This is an impressive feat for a fighter aircraft design that is nearly 50 years old.

Among the features included in the overall F-16 Block 70/72 configuration will be Northrop Grumman’s AN/APG-83 Scalable Agile Beam Radar (SABR). SABR is an active electronically scanned array (AESA) radar, and the type is also being retrofitted on a number of older Air Force Vipers.

The package will also introduce an enhanced glass cockpit, including a large pedestal multi-function display, updated mission computers, an advanced electronic warfare suite, and many more additions that you can read more about here. Block 70-configured F-16s will get a General Electric F110 turbofan, while Block 72 types will be powered by the Pratt & Whitney F100 engine.

It is worth noting that the older overhauled Vipers, such as those that entered service with Taiwan last year, were modernized with an advanced upgrade package that the Block 70/72 configuration is based on. These jets have been re-designated as F-16V models.

All told, with a projected 148 F-16s in the Block 70/72 configuration in Lockheed Martin’s future, and very possibly more to come, the company will undoubtedly be busy pumping Vipers out from its new production plant many years to come.