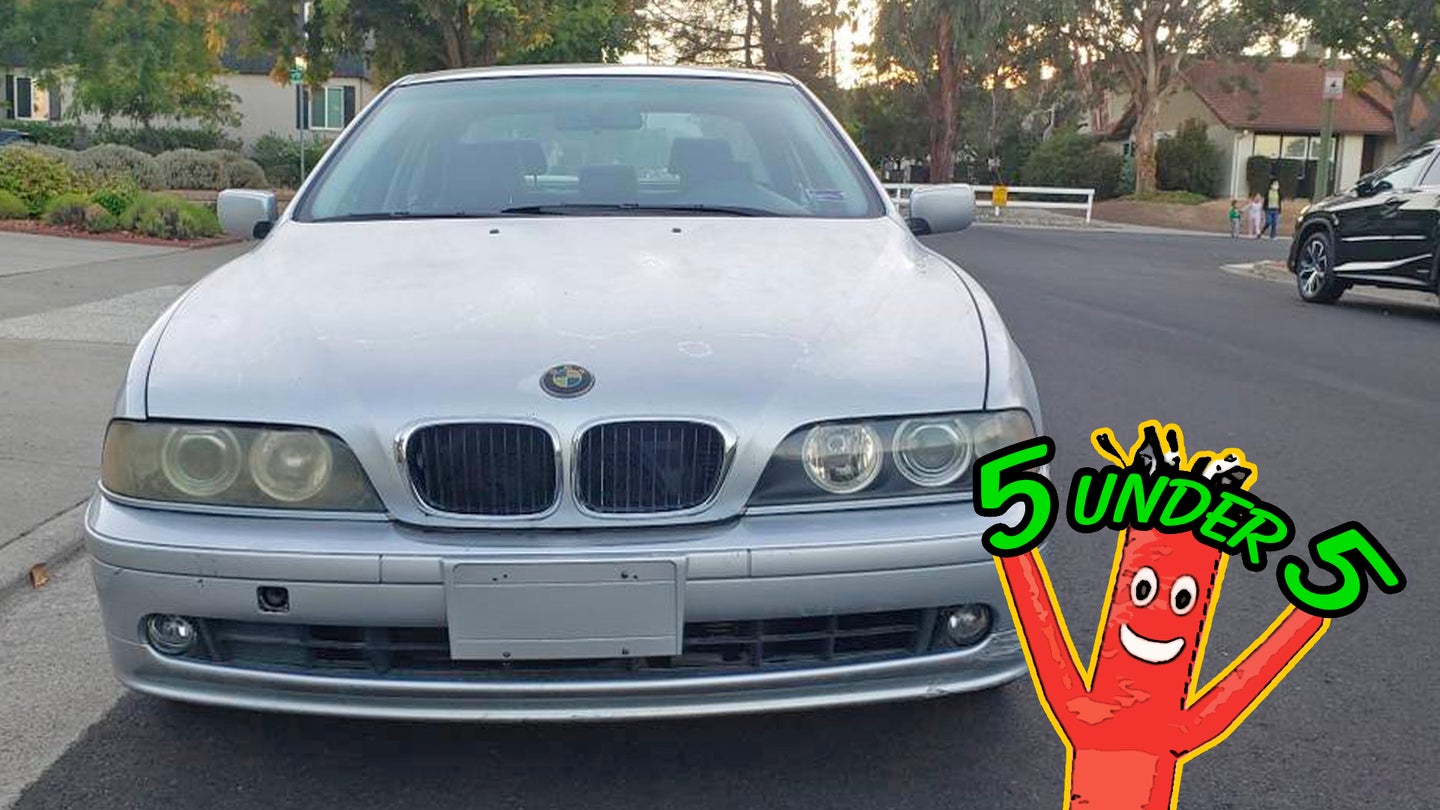 Southern California car enthusiasts know there are some real diamond-in-the-rough vehicular deals on Bay Area Craigslist. My colleague Chris Rosales and I always include it in our perusing, as it seems like the hit ratio for cool cars in non-sunbaked condition is above average there. While a lot of the Bay Area is affected by salt-rich sea air, it’s still a part of the country that doesn’t really seem to see much in terms of rust, either.

In 2022 it’s tougher than ever to find above-decent vehicles at an affordable price, especially if your budget tops out at $5,000. But they’re still out there, and we found five that could fit the bill for a variety of needs, ranging from super-budget to project car, family-friendly, fun, and utilitarian choices.

Keep in mind that this is just harmless perusing—no VIN checks or emailing back and forth with the seller took place, so the true condition is taken at face value. If any of them look enticing and you can afford a pre-purchase inspection, we highly recommend it. With that, let’s take a look at some sub-$5,000 hardware of Bay Area Craigslist. We also kept the search radius within 35 miles as the crow flies of Alameda, California, right in the heart of this beautiful slice of the country.

I’m starting this one off with a bang. Check out this glorious, made-in-Belvidere, Illinois masterpiece! No facetiousness here, either, it’s great to see a Plymouth Neon in what looks like respectably clean shape with just a hair over 100,000 miles on the clock. By the sound of the ad, it’s likely been senior-owned, so the old adage of an elderly woman using it to drive to the store and back might apply here.

For anyone doubting the feasibility of daily driving a ’90s Neon, think harder. This thing would return solid fuel economy, you could do major maintenance (like fixing its air conditioning) while blindfolded and with one hand tied behind your back, it’d probably be inexpensive to maintain, and it’d be easy to maneuver and parallel-park on the tight streets of San Francisco, San Jose, and Oakland. Plus, while some might want to preserve this beautiful specimen of a bygone era, most folks probably wouldn’t mind it if it takes a trimming from inconsiderate motorists with poor parallel parking skills.

What a legendary European body style the E39 5 Series is. People look back on this era in BMW history with affinity, particularly on the peak 5er, the 4.9-liter-V8-powered M5.

This six-cylinder model isn’t quite up there, but it’s still a solid choice. For one, it’s an M Sport model, so it came off the factory floor with slightly better suspension and accouterments over the base 525i. Though, the suspension probably needs replacing if it hasn’t already, but surely one could find components for not much cash. The 3.0-liter M54 under its hood is also well-regarded among BMW enthusiasts for being a revvy, generally trouble-free power plant (at least compared to other BMW engines).

This example’s done 130,000 miles and appears to be in generally good condition. If one wanted some not-too-old European fare to wrench on, clean up really nicely, and turn into a nice weekend cruiser, cars and coffee steed, whatever, it wouldn’t be a bad way to go. Especially if they’re already deep into proud-yet-sometimes-painful BMW ownership.

Fewer cars are harder to kill than an early 2000s Toyota, and this big ol’ Sequoia is no exception. Sporting the brand’s bombproof 2UZ-FE 4.7-liter V8, rear-wheel drive, and plenty of space for all the activities, this thing would serve as a decent tow rig, high-sitting family hauler, spacious work truck, or decent off-roader (though, no four-wheel drive here).

This example’s done 214,000 miles, which in early 2000s Toyota speak means just broken in. I bet if you put another 100K on the clock, kept up with maintenance, and kept it reasonably clean, you could sell it for exactly as much as you paid for it.

Unlike what many modern car advertisements want you to think, I find that a big sedan is a solid way to haul around your family of two adults and 1-2 children. It might not be a lifted-up crossover SUV (with barely any more interior space), but a spacious late-2000s Acura TL is hard to beat for such duty. These things are generally regarded as reliable, comfortable, and decently appointed for their era, and I think they look quite good to boot. My, how far we’ve strayed from clean sedan styling of this era.

This example’s got some mileage, but if it’s in good mechanical shape and indeed in all-around clean shape, I think $5,000 is a fair starting point for a little haggling.

I’ve got a soft spot for the Mark Four (Mk4) VW Golf platform, as this gen of the GTI was the hot hatch to have when I was in high school. The brand’s styling, while still good, changed up quite a bit when the follow-up Mk5 hit American shores just two years later by straying away from the brand’s classic boxy design. This narrow-angle VR6 has flair in spades, as these things are a proper riot, even if just for the sounds they make with an aftermarket exhaust bolted up.

The listing for this example is slightly incorrect: the photos show a manual gearbox instead of the listed automatic, which could bode well for anyone with a keen eye who’s after three-pedal fun for cheap. It’s potentially not showing up in other people’s search criteria, too. This VR6 engine is the 24-valve, 2.8-liter variant, which was a monster for its day—201 naturally aspirated horsepower and 199 lb-ft of torque. The owner says it runs well and has been well-maintained, and this generally appears to be true. It’s also well-appointed for its class and era. The interior looks to be in really nice shape and features the best OEM wheels one could have bolted up back in the day.

The post Five Under $5K: The Best Cheap Cars We Found for Sale (Bay Area Edition) appeared first on The Drive.