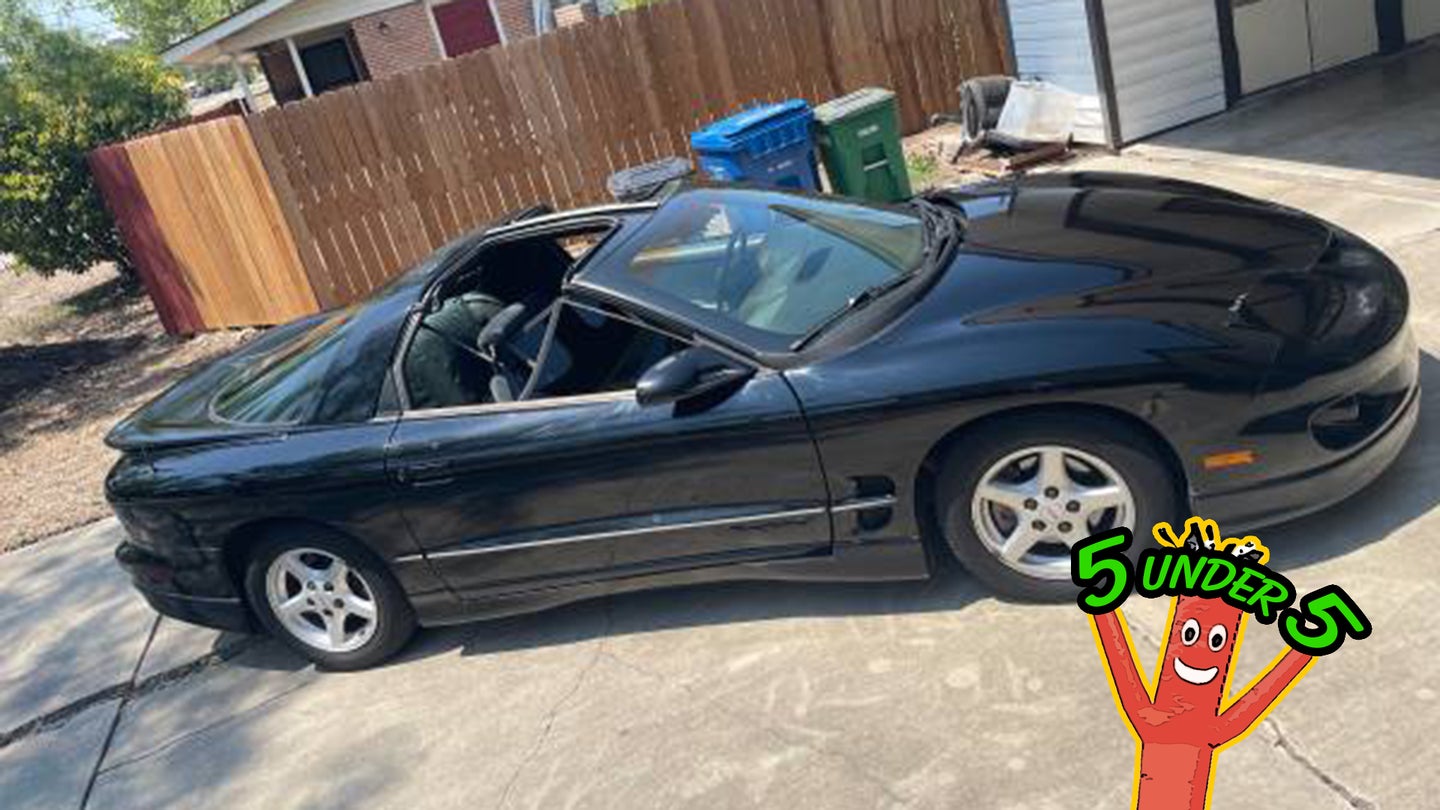 Searching for cheap used cars these days is genuinely tough. It’s harder than ever to find above-decent vehicles at an affordable price, especially if all you have to spend is $5,000. But they’re still out there, and we found five that could fit the bill for a variety of needs, ranging from super-budget to project car, family-friendly, fun, and utilitarian choices.

I’ll be honest, I’m used to the fodder of my home Los Angeles Craigslist. This search was a little tougher, but you folks out in Texas still have some interesting options. There are some cars that I would buy, but I wouldn’t recommend buying them, so I left those out in favor of much more practical choices. Instead of a sweet $3,000 Volkswagen Touareg, I subbed in a much more reasonable Japanese SUV. Just for you.

Keep in mind that this is just harmless perusing—no VIN checks or emailing back and forth with the seller took place, so the true condition is taken at face value. If any of them look enticing and you can afford a pre-purchase inspection, we highly recommend it. With that, let’s take a look at some sub-$5,000 hardware of the San Antonio Craigslist.

Cheap to Buy, Cheap to Own: 2000 Toyota Corolla

The budget slot was originally reserved for an interesting manual 1991 Dodge Colt, but that was sold within a day of finding it. Instead, this 2000 Toyota Corolla takes its place. A Corolla might be a boring choice, but that’s exactly what you want on a budget. It should be cheap to own and maintain, and it says the heat and air conditioning both work.

The listing states that it has an automatic, but the photos clearly show a stick shift, so potential buyers will have to confirm that detail. The large chrome wheels might not be for everybody, but if that’s your thing, then this is a great option with supposedly new tires.

If there is one truth we all have to face, it’s that the minivan is the vehicle most families really need. Lots of folks get SUVs and crossovers instead, but minivans have more interior room, cargo space, have a smaller footprint, and get better fuel economy, and do everything that people want. They just have the unfortunate stigma of being a minivan.

This 2005 Toyota Sienna is a perfectly fine example of a minivan. It’ll be dead reliable, spacious, and cheap. At $2,500, this is kind of a steal. It’s a boring option, but there are a lot of folks looking for a lead on something cheap and good.

The Nissan Xterra is something of a badly kept SUV secret. I’m not totally sure why they’re still so cheap, even in more densely populated areas. They have proper body-on-frame truck construction and have decent off-road hardware. Enough to be a rugged trail truck.

This particular Xterra is close to moon miles, but it has the immortal KA24DE engine and a manual gearbox. Unfortunately, it is two-wheel-drive, so ultimate trail capability isn’t there. But two rear-driven wheels will get you very far with the right driving style and attitude.

I’m also not totally sure why the car is face-down in the photos, but it might be parked on a grassy hill. It looks reasonably clean inside and out, and has a freshly serviced AC system, just in time for the winter. All for $4,000 clams.

Apparently, Texas loves its obscure old Mitsubishis. This 1989 Galant looks mint, even with 228,000 miles on the dash. Hell, it doesn’t look mint, it is mint. My mind is blown to smithereens by this ad. The seller included a Gran-Turismo-esque walkaround video for the car, going into absurd detail about this otherwise cheap car. Watch the video. I love the scrolling text box.

It does need an AC compressor, according to the seller. Otherwise, it allegedly needs nothing. And yes, even with the miles, I think the condition makes this something of a collectible. Not a lot of these Galants survived into the 2010s, let alone the 2020s. This is a time capsule that you can daily drive for just $4,000.

I’ll be honest, I had to reframe my idea of a fun car for this list. I like lightweight sports cars because I live near mountain roads. In Texas, a land-speed missile is the way to go. Enter this 2000 Pontiac Firebird, with T-tops.

Right off the bat, there are a few cons. The car needs AC and has a cracked dash, a stubborn check engine light, and a broken pop-up headlight motor. Also, the title apparently shows higher miles than on the odometer, and it isn’t registered. Unfortunately, it’s just about the only interesting car I could find in San Antonio that wasn’t insanely expensive.

For $5,000 this is a tough bargain, but I think some negotiation would unlock a very cheap project car. If the miles are truly low, then it could be a really decent proposition. And as the seller listed in the ad as one of the pros: “Cool ass car.”

The post Five Under $5K: The Best Cheap Cars We Found for Sale (San Antonio Edition) appeared first on The Drive.