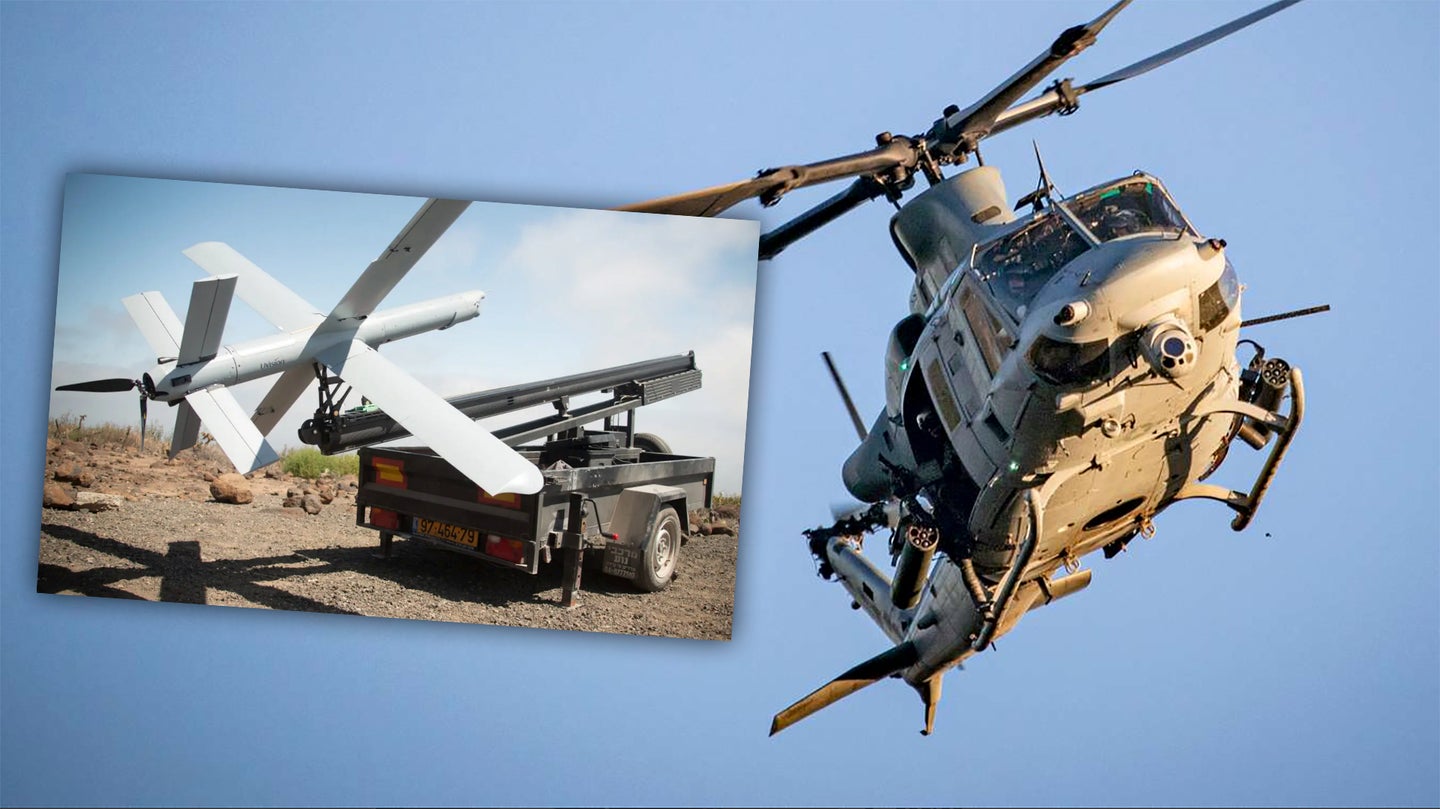 Marine Corps Capt. Michael Ayala was sitting in the back of a hovering UH-1Y Venom off the southern California coast in May, looking at the screen of a laptop. The image showed a drone-eye view of a Hero 400 loitering munition on its way to a pre-planned rendezvous with the helicopter.

Ayala gave the pilots in the cockpit a clock bearing to the loitering munition, which was acquired by onboard sensors before it was visible to the naked eye at about four kilometers out. Using a laptop-based control system, Ayala took control of the cruciform-style armed drone and prepared to engage a series of targets laid out in the Southern California Range complex south of San Clemente Island.

He now had complete control of the Hero 400EC , launched by ground controllers on nearby San Clemente, off the coast of San Diego. As mission commander for the Hero 400 demonstration, Ayala was responsible for overseeing the overall conduct of the mission, which involved establishing airspace deconfliction between the helicopter and the Hero 400EC and ensuring safety-of-flight considerations were met. Crucially, the test needed to gather the desired data on the drone’s performance and capability and how seamless control could be passed between Marines in different platforms and environments, he said.

“What we were doing was testing the platform’s ability to conduct an actual terminal attack on a specific target set and then successfully abort the system,” Ayala told The War Zone in a recent interview.

“This demonstration was basically experimentation with loitering munitions and effects… specifically, what we’re looking to accomplish is ensure that we have a good baseline knowledge and prove that such a platform can be safely utilized by both airborne players as well as ground personnel.”

Teaming helicopters with drones is nothing new. The Army has paired RQ-7 Shadow drones with its AH-64 Apaches to provide the attack helicopter crews a wider view of the battlefield, for instance. The Army also is testing swarms of loitering munitions, some with warheads and some without, to lead future airborne assault missions. In those tests, the suicide drones fly out ahead of manned rotorcraft to scout potential landing zones, identify targets and engage enemy positions — all the while feeding reconnaissance data back to manned assault aircraft and command centers — in preparation for inbound troops.

Adopting loitering munitions that can be controlled by land, sea and airborne platforms adds another dimension to what capabilities UAS bring to modern combat operations. For the Marine Corps, a system like the Hero 400, with its range and endurance and the ability to transfer control between platforms, provides significant mission flexibility. That aligns with the Corps’ plan to restructure as a lighter, more agile maritime force under the Force Design 2030 initiative.

The two-week course was condensed into a one-week crash course so the Marines could establish a working knowledge of the system before the real-world trial, Ayala said. At the end of the week he was confident in his ability to remotely pilot the Hero 400EC from anywhere.

Made by Israel-based UVision, which also has a U.S. subsidiary, the Hero-400EC is an electrically-powered precision loitering munition that weighs just under 90 pounds. The “EC” stands for “electric, cruciform,” for its propulsion type and four wings that give it a cross shape in flight.

With an integrated electro-optical/infrared (EO/IR) seeker, remote sensors, and GPS antenna, it can locate, track, and strike both static and moving targets with a 22-pound warhead. Deployed using a land-based catapult or a standardized canister launch system designed to be mounted on vehicles, the Hero-400EC can stay aloft for two hours and has a range of about 25 miles with a line-of-sight datalink. UVision says the munition can be configured for a range of up to 93 miles.

Once the loitering munition was airborne and inbound, Ayala linked his control unit in the back of the helicopter with the ground-control unit that launched the aircraft from San Clemente.

“We had an antenna setup with the ground control unit so we could positively control both the sensor payload as well as control the flight path and be able to program this thing to climb, to descend, to alter its flight path accordingly in order to maintain control over it,” Ayala said.

“It’s almost like a remote-control-aircraft like controller but it has a map system on board that allows you to use a stylus to plug in a pre-planned flight path, as well as alter the platform’s flight path on the fly, as well as see the platform sensor feed from its sensor payload. And there’s a couple [of] different things you can do. You can either allow the system to fly itself to a coordinate in accordance with the flight plan that you program, or you can manually take control of the sensor payload and it’s a fly-by-camera system, [the] sort of programming that allows you to essentially manually control the platform.”

Now it was time to put the Hero 400 drone through its paces. This consisted of a series of targeting runs on an array of pre-placed target sets on the southern side of San Clemente Island, which is owned by the U.S. Navy and administered by Naval Base Coronado. Ayala directed the suicide drone to lock onto both floating hulks and metal CONEX boxes on stilts, begin a terminal attack sequence and then abort the attack before impact. When used as a munition, the Hero 400EC would physically hit the target and detonate its warhead.

“We were established in a holding area with lateral and altitude standoff from the system,” Ayala said. “And we basically ran the system on a set of targets, running and aborting a certain number of attacks to show that it can be positively controlled from the airborne platform.”

The test worked, demonstrating that a loitering munition like the Hero 400EC can be launched from one location, handed off to a helicopter crew and then be used to locate, spy on and/or engage targets, he said. Loitering munitions can combine reconnaissance and targeting capabilities with a warhead that allows an operator to perform a precision strike if the mission calls for it. They essentially are guided missiles that can be “un-fired” if a suitable target is not found or a tactical situation changes after launch.

Over San Clemente, Ayala and his fellow Marines took the scenario a step further. Once their airborne-directed attack-and-abort runs were complete, Ayala gave the Hero 400EC a flight path to another rendezvous with Marine 1st Recon troops going ashore in small boats. Those troops took control of the loitering munition with a man-portable control device and performed another set of attack runs, each one aborted before impact, on land-based targets.

“They were also able to route it to a pre-planned ditch point,” Ayala said. “They were able to track and target a moving vehicle and then successfully trigger a safe ditch point, trigger the platform’s recovery system, which is an onboard parachute that allowed them to safely recover the system for use in the future.”

Ayala said the Hero 400EC demonstration represented the “crawl-walk” phase before the Marine Corps runs with some sort of unmanned air vehicle that can team with units in the air, on the ground and at sea with multiple payloads. The Marine Corps is not wedded to the Hero 400, but it does want a “payload agnostic” teamed drone with multiple launch options that can be used both for surveillance missions and strike, depending on operational requirements, Ayala said. The Hero drone comes in a variety of sizes and potencies, all of which are deployed and operate in the same basic way.

“With the Marine Corps, we are always looking for, I think, that kinetic application of force, but it’s more than just that,” Ayala said. “We’re also looking for potential solutions below the threshold of violence. We’re also looking at how we can exist and operate where we’re going in the Pacific and initially, how we’re going to fight gray-zone operations to disrupt and contest frontline behavior in the Pacific island chains. And that includes operating below the threshold of violence, which is that non-kinetic application.”

The Marine Corps prides itself on blowing stuff up, but in the wide-open spaces of the Pacific Ocean where Marines expect to fight future conflicts, it is often difficult to find a target to shoot at. Distributing its forces in small groups on islands, aboard ships and in aircraft across large expanses calls for just the sort of system the Hero 400EC represents — a reconfigurable unmanned platform, controllable by a single Marine anywhere, that can act as a reconnaissance drone and perform strike missions at the touch of a screen. Large loitering munitions like the Hero 400EC, handed off from Marine to Marine, would provide long-range ship-to-shore and over-the-horizon operation while maintaining visual line-of-sight control without the added weight and complexity of satellite communications.

Ayala said that is exactly the sort of capability the Marine Corps wants to field.

The post Flying A Suicide Drone From The Back Of A Marine Corps UH-1 Helicopter appeared first on The Drive.