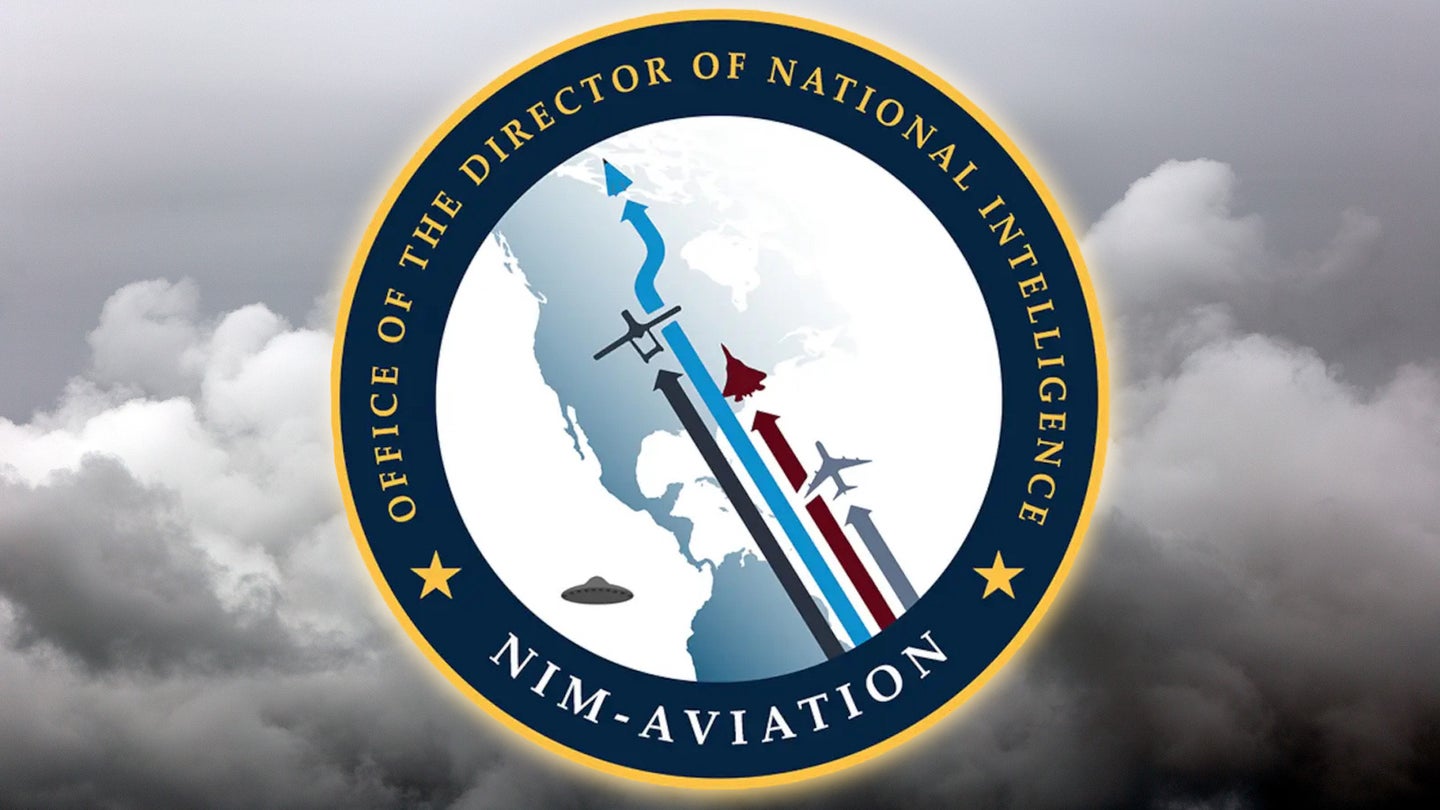 A new official logo for a U.S. Intelligence Community office focused on aerial threats and related security issues, particularly in the skies over the United States, is turning heads for its inclusion of a depiction of a flying saucer. This comes at a time of reinvigorated interest within the U.S. government, as well as the public at large, in unidentified flying objects, or UFOs, which are currently now referred to officially as unidentified aerial phenomena, or UAP. Over the past year or so, the U.S. military, in particular, has been increasingly sparing with members of Congress about how best to respond to the potentially very real threats that UAP present.

The logo in question is the official seal for the National Intelligence Manager-Aviation (NIM-A), who resides, along with their staff, within the Office of the National Director of Intelligence (ODNI). U.S. Air Force Maj. Gen. Daniel L. Simpson is the current NIM-A, and is also the Executive Director for the National Air Intelligence Integration Office (NAI2O) and Assistant Deputy Chief of Staff of the Air Force for Intelligence, Surveillance, and Reconnaissance (ISR). The logo appears on an official website for both NIM-A and NAI2O, the latter entity also operating under the auspices of ODNI.

The complete logo has four other air vehicle silhouettes, each in a different color – a dark gray drone, a blue wedge-shaped vehicle, a red Russian Su-57 advanced combat jet, a light gray airliner-sized aircraft. The drone silhouette appears to represent a twin-boom, pusher-propeller design. Multiple types of uncrewed aircraft in this general configuration are already in use by armed forces around the world today, including in China and Iran, and have also notably served as the basis for ‘kamikaze’ drones that the Ukrainian military has employed against its Russian opponents.

Each one has a trailing line behind it in the same color, with the blue one, which is all but certainly meant to reflect emerging hypersonic threat, showing a lateral shift in its flight path. Wedge shapes are among those commonly used in the design of unpowered hypersonic boost-glide vehicles.

However, it’s not clear if the specific silhouettes are meant to reflect anything in particular beyond the general categories of threats that NIM-A focuses on – which would also appear to include UAPs. At least one of the air vehicle silhouettes, the Su-57 one, appears to have come from an Adobe clip art gallery.

All of this is superimposed on top of a basic map showing much of North America and Central America, as well as parts of South America. The four air vehicles are depicted moving in a northwestern direction across the Caribbean Sea and the Atlantic Ocean, and then over North America. The flying saucer, which has no corresponding line indicating movement, sits by itself in the Eastern Pacific to the southwest of the Central American isthmus.

An outer ring features the phrases “OFFICE OF THE DIRECTOR OF NATIONAL INTELLIGENCE” and “NIM – AVIATION” in gold and white lettering, respectively, as well as a pair of gold stars.

In addition, by all indications, the seal is new – the filenames of two versions currently on the NIM-A/NAI2O site are “FINAL_NIM-AVIATION_SEAL%20(2).png” and “web_banner_newseal.png” – but it’s not clear how new. An older version of the site from June available through the Internet Archive shows the logo for the separate NAI2O rather than any NIM-A one.

In addition, for an unexplained reason, between September 25 and 26, a trio of logos on the main website was changed. On the 25th, the seals for ODNI, the Office of the Deputy Chief of Staff of the Air Force for ISR and Cyber (also known A2/A6), and NIM-A were present. The NIM-A logo was then swapped out for the NAI2O one.

At the time of writing, there do not appear to be any readily available details about the NIM-A seal or the potential symbolism of any specific element therein. It is, of course, important to note that this would not be the first time, by any stretch, that an official U.S. government/U.S. military seal, unit insignia, or other logo has featured some kind of curious motif that has prompted discussions about its meaning, only for it to later turn out to be an in-joke or something similarly innocuous. This is nothing to say of the absolute mountain of semi-official logos on U.S. military morale patches and challenge coins with UFO and alien motifs, many of which are tied to top-secret projects.

The War Zone has reached out to ODNI for more information.

Though the logo, and the inclusion of the flying saucer, in particular, have prompted varying degrees of speculation already, on a core level, the graphical choices are both unsurprising and entirely relevant to NIM-A, as well as NAI2O. Formally established in 2015, NAI2O has its roots in recommendations from the National Commission on Terrorist Attacks upon the United States’ report on the infamous 9/11 terrorist attacks on New York City and the Pentagon. The position of NIM-A, a central manager for such issues, was subsequently established.

“NIM-A + NAI2O leads intelligence community efforts to identify, analyze, and integrate intelligence on threats and vulnerabilities in the Air Domain,” a mission statement on the current version of the shared website for these two entities reads. “We advocate for intelligence priorites and opportunities to strengthen the safety and security of the Air Domain.”

“Our team works diligently to keep partners and stakeholders informed on key air domain intelligence efforts,” a message attributed to Maj. Gen. Simpson on the site’s landing page adds. “We developed this site as a resource hub featuring background on NIM-Aviation and up-to-date informative unclassified intelligence and products.”

“We particularly welcome all existing and future partners whose collaborations continue to strengthen our global air domain,” it continues. “As our team continues to grow we encourage you all to visit our site frequently to learn more about our role in integrating intelligence to safeguard the global air community.”

The current version of the NIM-A/NAI2O site does not appear to specifically mention UAP, but it does talk specifically about the other kinds of aviation threats – hostile uncrewed aircraft, hypersonic weapons and other traditional military threats, and hijacking and other forms of aviation-related terrorism – depicted in the NIM-A seal, among others. These are all very real potential threats to U.S. interests, including within the United States itself, which could be employed by a variety of state and non-state actors.

The dangers posed by small uncrewed aircraft, including weaponized commercial types, to targets on and off the battlefield is something that is a particular area of concern. The War Zone has highlighted these threats and how they continue to evolve and expand on numerous occasions, as well as the potential for uncrewed systems to be the explanation for at least a significant number of reported UAP sightings.

It’s also no secret that NIM-A, together with the now-defunct U.S. Navy-led UAP Task Force (UAPTF), was responsible for the production of the much-anticipated unclassified government report on UAP activity, which was released in June 2021. The report raised more questions than it answered, as you can find out about more in The War Zone‘s in-depth analysis of its contents here.

Many members of Congress who have become focused on the issue of UAP have made clear that their concerns stem from the very real potential national security threats unidentified craft might represent, rather than fears of something like an alien invasion. U.S. military officials have already determined that a number of high-profile incidents initially described as UAP sightings involving American warships off the coast of Southern California in recent years were actually instances of harassment by drones that might be tied to a hostile foreign power. The War Zone has reported extensively on these incidents based on information obtained via the Freedom of Information Act (FOIA).

Of course, the inclusion of the saucer in the NIM-A logo, which would strongly appear to be a tongue-in-cheek reference to NIM-A/NAI2O’s work on the UAP issue as part of their larger missions, does raise the question of whether it feeds into an unuseful stigma that could hamper recording of possible significant incidents. The War Zone has in the past discussed how UFO/UAP stigma might discourage individuals within the U.S. Intelligence Community and U.S. military from making potentially important reports. Multiple pieces of UAP-related legislation now making their way through Congress that specifically include provisions that would create added protections against retaliation for individuals who share information with relevant US government entities.

Congress and the Department of Defense are also sparing over the basic organizational structure to handle UAP matters. Late last year, the Pentagon created what it called the Airborne Object Identification and Management Group (AOIMSG), as well as the Airborne Object Identification and Management Executive Council (AOIMEXEC). Earlier this year, AOIMSG was renamed the All-domain Anomaly Resolution Office (AARO), reflecting a broadening of its responsibilities. Some legislators are worried these organizations are still not up to the task and are looking to compel the Pentagon, by law, to reorganize its efforts.

All told, it remains to be seen what the official reasoning behind including the flying saucer in the NIM-A seal was, but ODNI certainly has very real responsibilities with regards to reported UAP incidents, many of which themselves may well reflect very down-to-Earth threats. We will be sure to let readers know what we ultimately hear back from ODNI.