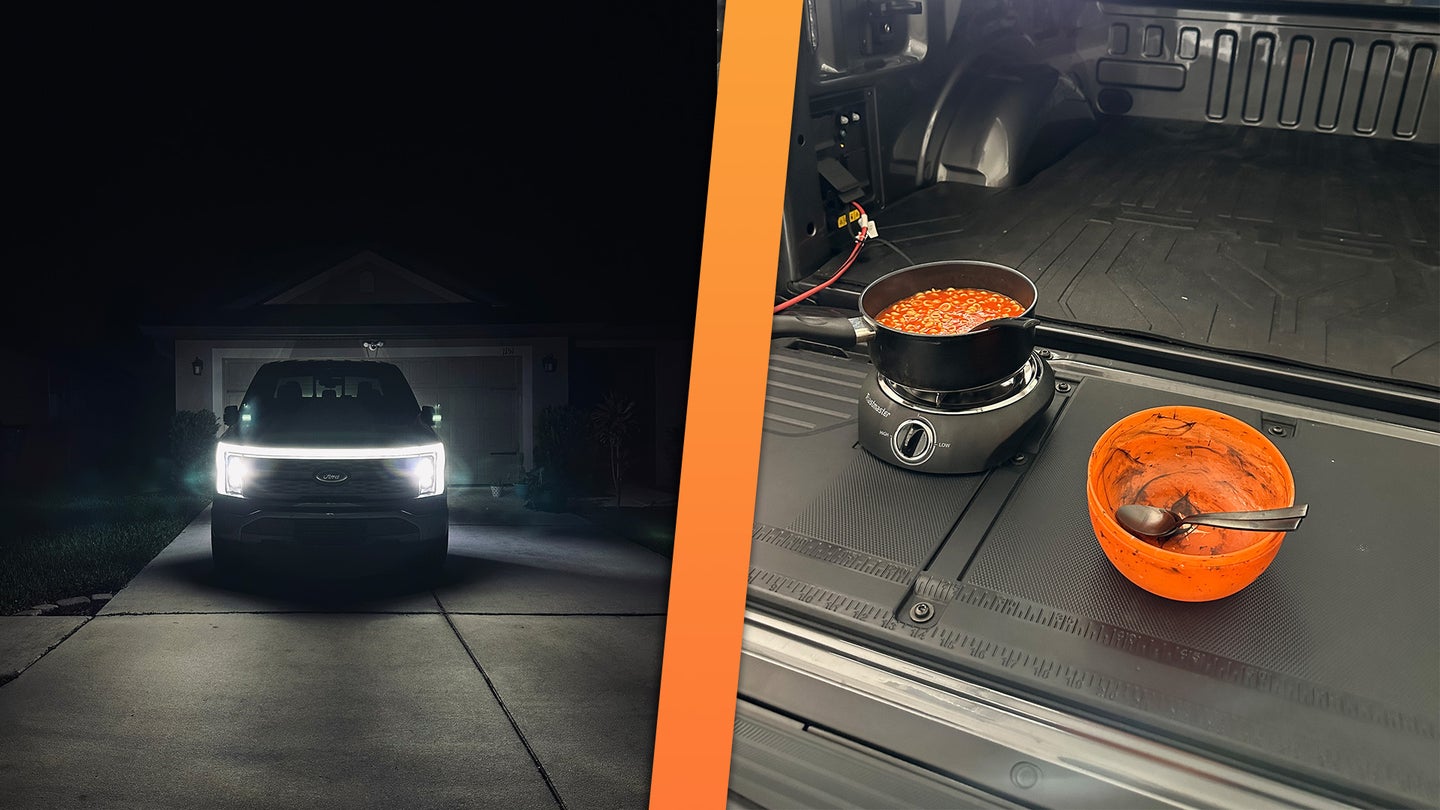 When Westley Ferguson ordered his new 2022 Ford F-150 Lightning Lariat the day it was revealed, he knew he could use the truck to power his home outside Orlando—he just hoped he didn’t have to.

“It’s not a thing you really want to use, but when it does happen, it was nice to have. I’ve always had family members be like, ‘What do you do if you run out of power?’” Ferguson told The Drive. “All the silly questions like, ‘Well if the power goes out, what are you going to do with your truck?’ And it’s like, ‘Well, I’ll use it as a power source.’ It worked out great. I cooked dinner with it.”

That’s true, when Hurricane Ian struck the coast of Florida, Ferguson figured his new truck would come in handy. Nearly three months after his specially ordered truck showed up, he was using the F-150 Lightning’s bi-directional charging to provide air conditioning, keep appliances powered, and keep TVs running for critical news. He wasn’t alone: According to Ford, usage of the Ford F-150 Pro Power Onboard services in hybrid and all-electric trucks surged by 127% after Hurricane Ian’s landfall on Sept. 29 compared to the month prior. Ford also says it’s providing F-150 trucks to nonprofits around Florida to help with search and rescue.

“What we’re seeing with customers is exactly what our engineers envisioned with Pro Power Onboard for jobsite, or in a pinch, urgent-need situations,” Ford spokesman Mike Levine said.

Brian Riddle lives just outside of Tampa, and his 2021 Ford F-150 Hybrid Power Boost has been his go-to truck since he purchased it. As a commuter, he said he was always aware that his truck could run on electrons—“It’s great in stop-and-go traffic,” he said—but when Ian took a turn toward his town, he considered other uses.

“We had hurricane supplies going into the week, but no generator. For the most part, we thought we were fine. When the path shifted south … we were in that path,” Riddle said. As a diabetic with medicine that requires refrigeration and a sufferer of severe sleep apnea, days without power could be more than just an inconvenience.

Riddle says he started his truck Wednesday and used it as a generator until Friday. “It was plugs on plugs,” he said. Running for 52 hours, Riddle said the storm surge came and went without much fanfare.

“My wife pointed out that it was more of a glamping exercise for us … We were blessed and lucky,” he said. He even reached out to Ford CEO Jim Farley to tell him that his F-150 was more than a truck during the storm, it was a lifeline.

Ferguson admits he was lucky, too; his home only had minimal damage, and power was restored within two days. But he also admits that his first EV helped him stay prepared. It was a lesson he learned from Hurricane Irma when his power was cut for days without air conditioning and other services.

“Irma was a Cat 3 when it went over central Florida. There was a lot more tree damage. The power outages were a lot longer,” he said.

Ferguson said his F-150 Lightning gave him a hot meal while parked in his garage, shelter, and comfort during the storm’s surge.

The truck wasn’t just his first all-electric vehicle, but also his first full-size truck. He admitted he would have purchased the truck even if he didn’t live in Florida—and wasn’t considering that he might need emergency power—but he’s glad he did. It took him about a year to land on the F-150 Lightning after considering similar rivals from other automakers and said the truck has exceeded his expectations so far.

“I had other people, other friends that had [EVs]. So, it was kind of that positive reinforcement of other people buying EVs and having good experiences that got me even got me more excited about it,” he said. “I feel like EVs are innovating and that’s why I pulled the trigger.”

He said between appliances, air conditioning, and stovetop cooking, the Lightning’s power supply was barely dented: “I think we could run the [air conditioning] all the time and only use like 2%.” And he’s been satisfied with the range so far: “I’m an easy driver, so the mileage I get from it is extremely good for me.”

Ferguson said for reasons unrelated to the hurricane, he’ll be moving north out of Florida next month. The truck is likely to serve another critical role then, instead of a backup power generator; it’ll be just a truck, moving another family like many other trucks do every other day.

“I think there’s a lot of negative mentality behind EVs and I don’t understand why,” he said. “I think this was a good example of showcasing that EV can do … that if you’re ever stuck in a situation where you don’t have power for a week, or you don’t have power for two days, you kind of have a peace of mind that you have a resource at hand that can be there for you.”