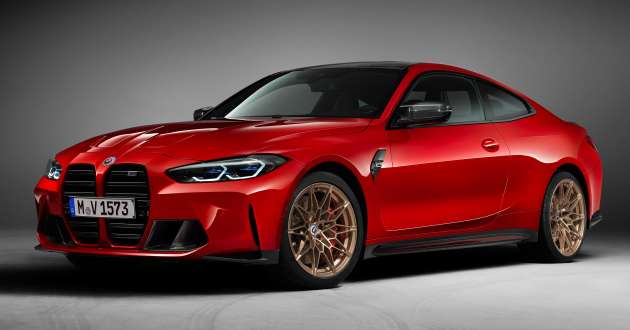 Last week, BMW unveiled the rather special G82 M4 CSL to commemorate the 50th anniversary of its M division. Only 1,000 units of the M4 CSL will ever be made, so if you missed out on an allocation, what are your options?

Well, the German carmaker has released 50 Jahre BMW M editions of the current M4 as well as the G80 M3, both of which are available with the standard (480 PS/550 Nm) or Competition (510 PS/650 Nm) engine. The corresponding transmission – six-speed manual or eight-speed M Steptronic automatic – are dependent on the engine chosen, as is rear-wheel drive or all-wheel drive.

While the 50 Jahre BMW M edition models share the same mechanicals with the regular M3 and M4, they do come with aesthetic enhancements to make them stand out. First up, these cars will have an exterior paintwork featuring colours from the history of BMW M, complemented by forged wheels in a similarly exclusive colour scheme.

In the case of the M4, available options for the body colour include Carbon Black, Macao Blue, Brands Hatch Grey, Imola Red and San Marino Blue, while the wheels can be had in two matte finishes – Orbit Grey and Gold Bronze.

These options are exclusive to Europe and other selected sales regions, but over in China, the exterior paint finishes available are Fire Orange (with Orbit Grey wheels) and Stratus Grey (with Gold Bronze wheels). According to the company, these colours relate to the fact that the anniversary of BMW M is being celebrated in the market in the Year of the Tiger.

Inside, the door sill panels bear the lettering “Edition 50 Jahre BMW M,” while the centre console gets a metal plaque with “M4 Edition 50 Jahre BMW M” that corresponds to imprints on the headrests of the front seats (standard M sports seats or optional M carbon bucket seats).

Meanwhile, the M3 50 Jahre BMW M was designed exclusively for the United States and Canadian markets and will be offered in a choice of five exterior paint finishes – Vermilion Red, Techno Violet, Interlagos Blue, Fire Orange and Limerock Grey. All colours are paired with Orbit Grey forged wheels and selected M Performance parts like a front splitter, rear spoiler and carbon/titanium tailpipe trims.

Like the M4, it too gets “Edition 50 Jahre BMW M” door sill trims, but the seats get the M stripes on their headrests and an exclusive seam pattern instead. There’s also a metal plaque on the cupholder cover of the centre console with the inscription “M3 Edition 50 Jahre BMW M” and the reference “1/500,” the latter indicating the limited production run of just 500 units for these markets. The M4 also comes in limited quantities depending on the market it is sold in.