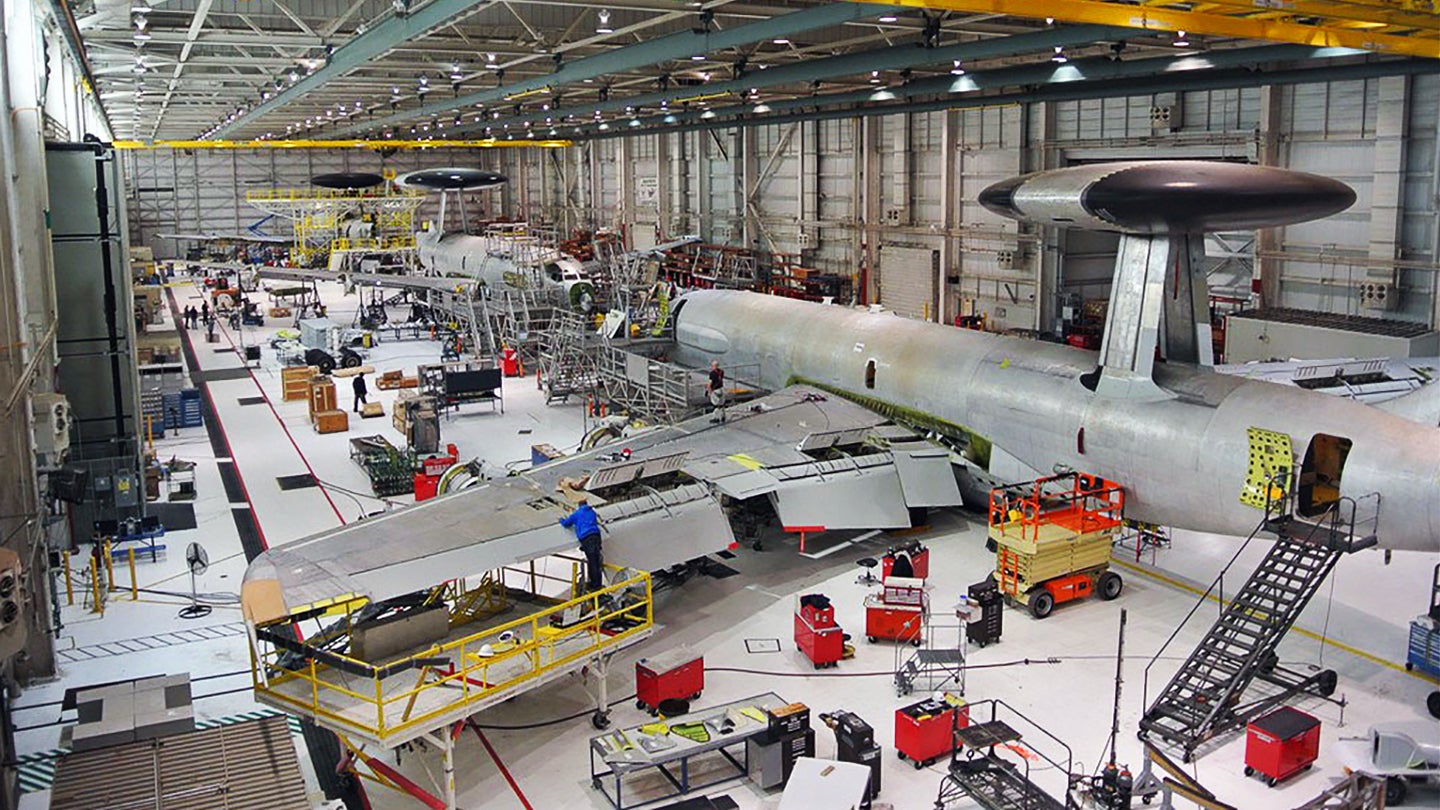 Thanks to the age and unreliability of the AWACS, there is already a capability gap in airborne early warning and command and control that is only going to get worse, Gen. Mark Kelly told reporters, including from The War Zone, last week at the Air & Space Forces Association’s (AFA) 2022 Air, Space & Cyber Conference.

“The first thing I would offer is there’s already – whether there’s 31 airplanes or 16 airplanes – there’s a gap today,” said Kelly.

The Sentry, the first version of which entered service in the late 1970s, uses the long out-of-production Boeing 707 airframe powered by TF-33 engines in U.S. variants and has an increasingly troublesome availability rate.

The Air Force’s own statistics show the increasing difficulty in keeping the AWACS operational according to Defense News, with between roughly 40% and 45% of the Sentries unable to fly in 2021, the latest figures available. The E-3G’s mission-capable rates fell 10 percentage points last year from 70.7% in 2020 to 60.7% in 2021. The E-3B mission-capable rate dropped from 65.8% to 55.8% during that same period.

“There’s a reason why there’s exactly zero airlines on planet earth that fly the 707 with TF-33 engines,” said Kelly. “The last airline was Saha Airlines in Iran. We basically have 31 airplanes in hospice care, the most expensive care there is. And we need to get into the maternity business and out of hospices.”

The Air Force, which plans to keep its B-52 fleet as part of its core bomber force into the future, is replacing that aircraft’s TF-33 engines.

As an example of why he has disdain for the Sentry, Kelly said it was much harder to maintain than the Wedgetail, even for the same basic parts.

He used the hypothetical example of both aircraft being deployed to Al Dhafra Air Base in the United Arab Emirates.

“Let’s say it’s exact same part, whether it be a flat hinge or avionics case. They’ll drive over to Dubai, and they’ll be back in two hours, [and the E-7] is up and running.”

The same part breaks on the AWACS “more often because it’s that old,” said Kelly, and it is much harder to fix. One big reason is that the E-7 is based on Boeing’s 737 next-gen airframe, which has a massively active supplier base.

It will be cannibalized “out of the boneyard or out of the fleet at Tinker [Air Force Base] and two weeks later that airplane will be back,” said Kelly. “So that’s not a way we’re going to be able to resource and sustain a fight. So we have a capability gap to date for that. And so the only way we’re going to plug that gap is to get E-7s on the ramp as fast as we can, and as many as we can.”

In announcing that the Wedgetail would replace a portion of the Sentry fleet, the Air Force earlier this year said in a media release that it’s “the only platform capable of meeting the requirements for the Defense Department’s tactical battle management, command and control and moving target indication capabilities within the timeframe needed to replace the aging E-3.”

A contract award is planned for Fiscal Year 2023, the Air Force said.

The Pentagon’s 2023 Fiscal Year budget proposal, released earlier this year, includes a request in the Air Force’s portion for $227 million in funds to support E-3 replacement efforts, including buying the first prototype. The proposed budget also calls for the retirement of 15 E-3s and using the funds that would otherwise go to operating and maintaining those aircraft to instead help pay for their successors.

We covered that decision in depth here.

But Kelly is not patient when it comes to the Wedgetail. He said that the U.S. is decades late in fielding the aircraft originally developed for the Royal Australian Air Force (RAAF).

He went on to be very blunt about the current airborne early warning situation, stating “There’s no amount of lipstick on this pig that’s gonna make it look good.”

But despite Kelly’s feeling of urgency, getting E-7s into the Air Force inventory is no easy feat because there Boeing already a long waiting list.

“The timeline is driven by the fact that we’re buying new commercial airplanes and then modifying them to be the surveillance platforms that we want,” Air Force Secretary Frank Kendall told the Senate Armed Services Committee earlier this year. “Getting the airplanes is about a two-year process, and then modifying them is another two-year process. There are things that we could do, however, to maybe get access to aircraft earlier, one way or another.”

Boeing ended commercial production of the 737 NG in 2020, but it continues making the airliner for customers of military derivative aircraft such as the E-7 and the US Navy’s P-8 Poseidon sub-hunting aircraft, according to Defense News.

It’s not yet clear how much the Air Force’s E-7 variant will differ from Wedgetails already in service elsewhere, as well as those being now built for the United Kingdom. The RFI that the Air Force put out in February indicated that there could be service-specific requirements for the aircraft’s radar, communications and battle management systems, electronic support measures suite, networking architecture, and defense systems, among other things, as you can read more about here.

Beyond being more reliable and supportable than the E-3, the E-7 is also a more capable early warning platform.

Kelly said he is less interested in getting a perfect platform than he is in getting them airborne and improving them along the way.

The Air Force has said in the past that it hoping to field a space-based radar to meet some of these needs in the future. How advanced the development of that capability might be already is unknown.

Last year, the head of the U.S. Space Force, Gen. Jay Raymond, revealed that work was already being done in the classified realm on a constellation of radar satellites with ground moving target indicator (GMTI) capability as part of the replacement of the Air Force’s E-8C Joint Surveillance Target Attack Radar System (JSTARS) jets. The Air Force’s 2023 Fiscal Year budget request says that “the SecDef [Secretary of Defense] certified that a spaced based Ground Movement Tracking Indicator (GMTI) capability exists to meet the Combatant Commanders Requirements” to further justify the divestment of the entire E-8C fleet over the next two years or so, indicating that capability is much more mature than previously understood.

There are other clandestine capabilities that could provide some of the sensor side of the GMTI and possibly the AEW role in the forward reaches of the battlefield, too.

Kelly is not just interested in growing the E-7 fleet. Doing the AFA session with reporters last week, he also expressed a similar interest in growing the fleet of the EC-37B Compass Call electronic warfare aircraft, saying that and the Wedgetail are two of his top priorities.

When asked if the planned EC-37 buy was insufficient, Kelly said while he “wants more” he is cognizant of budget realities.

“I want more, you know, but it’s like a lot of other questions. I want more F-35s. I want more [F-15] EXs. es, I want more. But Secretary Kendall and [Air Force] Chief [of Staff Gen. Charles Q.] Brown are paying a non-trivial bill to recapitalize two of the three legs of the nuclear triad and it is not small zeros. And so the short answer is yes, I’d like to have more. But I want a lot more of everything. I’m a big fan of the E-7 and the EC-37.”

Kelly is not alone in wanting to see the Air Force ramp up procurement of Wedgetails.

“The Air Force spent decades ignoring the need to recapitalize an aging fleet of command and control aircraft, the E-3 AWACS,” Sen. James Inhofe, the Oklahoma Republican who serves as the ranking member of the Senate Armed Services Committee, said in a statement to The War Zone. “Now, with the Chinese threat bigger than ever, we cannot wait a moment longer to get the E-7 Wedgetail to the battlefield. The Air Force is finally hearing us on this and taking the first steps on getting this critical capability out there months or years sooner than the five years they planned. Now, we’ve got to hold them to it. Our closest allies have been flying the E-7 for a decade or more, it’s past time we catch up.”