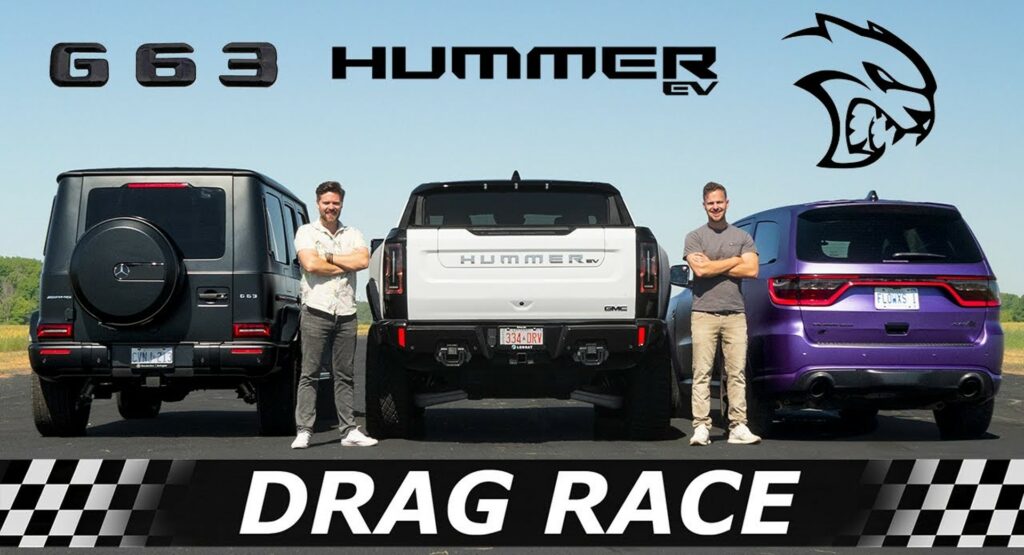 The Hummer EV is undoubtedly a very fast pickup truck but what would happen if it went up against two of the most powerful combustion-powered SUVs on the market? Now, it’s taking on the Mercedes AMG G63 and the Dodge Durango Hellcat and one of the three does little more than watch as the other two end up battling it out.

Brought to us by the folks over at the YouTube channel ThrottleHouse, these three vehicles are the ones that only the very wealthy get to play with. It’s rare to see any one of them on the road but it’s even rarer to see all three show up at the same place at the same time.

One of the hosts notes that the Hummer is racing with a charge state of 90%. That’s not optimal for an EV headed into a drag race but as he rightly points out, that’s more realistic than prepping the car at the track. The Hummer has 1,000 hp (745 kW) while the Durango makes do with 710 (529 kW) and the Mercedes has an almost pedestrian 577 (430 kW). Of course, the Hummer weighs only slightly less than the moon.

Read More: The US Army Has Purchased A GMC Hummer EV To Test It Out

That weight carries a big penalty for the Hummer against each of its rivals here. The AMG G63 rockets off ahead of the GMC but the Hellcat might as well have an actual rocket strapped to it because it overtakes the other two over the first 60 feet (18m). That’s where the extra power from the Hummer and the low-by-these-standards power of the AMG really show up.

Despite making a valiant effort, the Hummer EV ends up hitting its 106 mph (170 km/h) top speed just as it catches the Durango. Of course, the Dodge can travel well above that speed so it continues pulling onto a victory.

In a roll race, the results are even more competitive as the Hummer manages to slowly but surely walk away from both ICE vehicles and just barely cross the line before that top speed limiter comes into play again. It’s still very close though and the Hellcat isn’t too far off when the flag comes down.

The G63 ends up being little more than a spectator and a good example of just how fast SUVs and trucks have become these days. We’d love to see the first time someone hacks the Hummer EV to allow it to go faster than 106 mph as we can’t help but wonder where the Hummer EV really runs out of power.