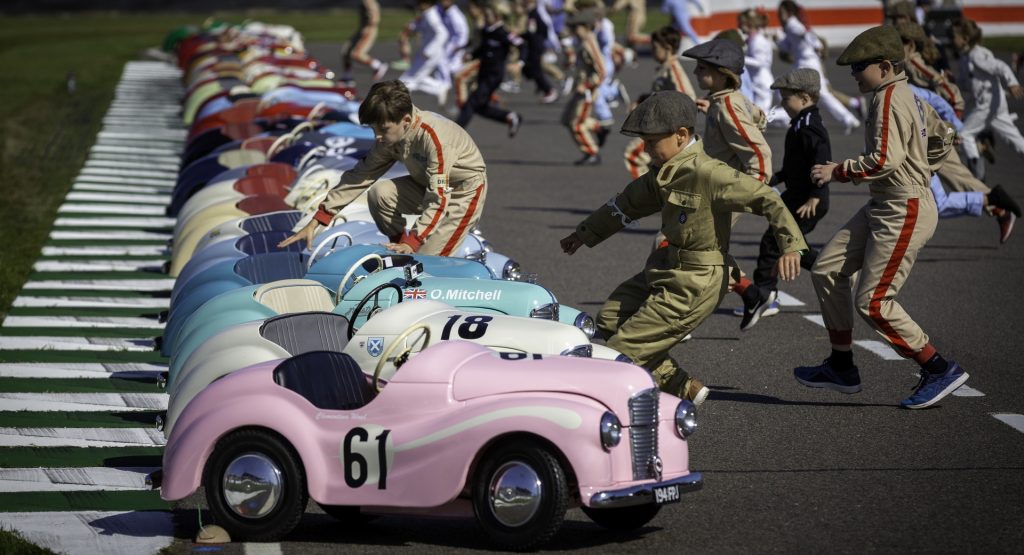 In 2022, the Goodwood Revival will commemorate the 10th anniversary of one of its best-loved races, the Settrington Cup. To celebrate the special running of the pedal-car race that sees children between the ages of four and 11 competing against one another, the Duke of Richmond is looking to field his own car in the event.

Naturally, he doesn’t quite meet the age restrictions nor the size limitations for either the competition or the Austin J40 pedal car, so he must find a champion to compete in his stead. Fortunately, your child may actually get the chance to be the Duke’s champion.

Goodwood is inviting children between the ages of four and 11 to enter the “Race Flag Competition” to find the one who will take the wheel and the pedals of the Duke’s race car.

To enter, your child must download the template and entry form that can be found at goodwood.com and draw their own racing flag to join the ranks of the red, yellow, and chequered flags that are waved at the Goodwood Revival.

The competition opened on May 11 and closes on June 5, and the organizers promise that a winner will be selected shortly after the competition ends. The selected entrant will be offered the wheel of the Duke of Richmond’s Austin J40 for the 10th running of the Settrington Cup on the weekend of September 17-18.

But wait, there’s more! As with any good racer, the winner will be given an opportunity to hone their skills and tune their car at the Classic Car Sunday Breakfast Club at the Goodwood Motor Circuit on Sunday, July 24.

First run in 2012, the Settrington Cup begins with a Le Mans start, in which racers must run to their pedal cars, jump in, and then pedal furiously down the pit lane straight to the finish line. All of the competitors race in Austin J40s, so it is a spec series, meaning that the winner of the Race Flag Competition’s only advantage will be the practice time they get in July.