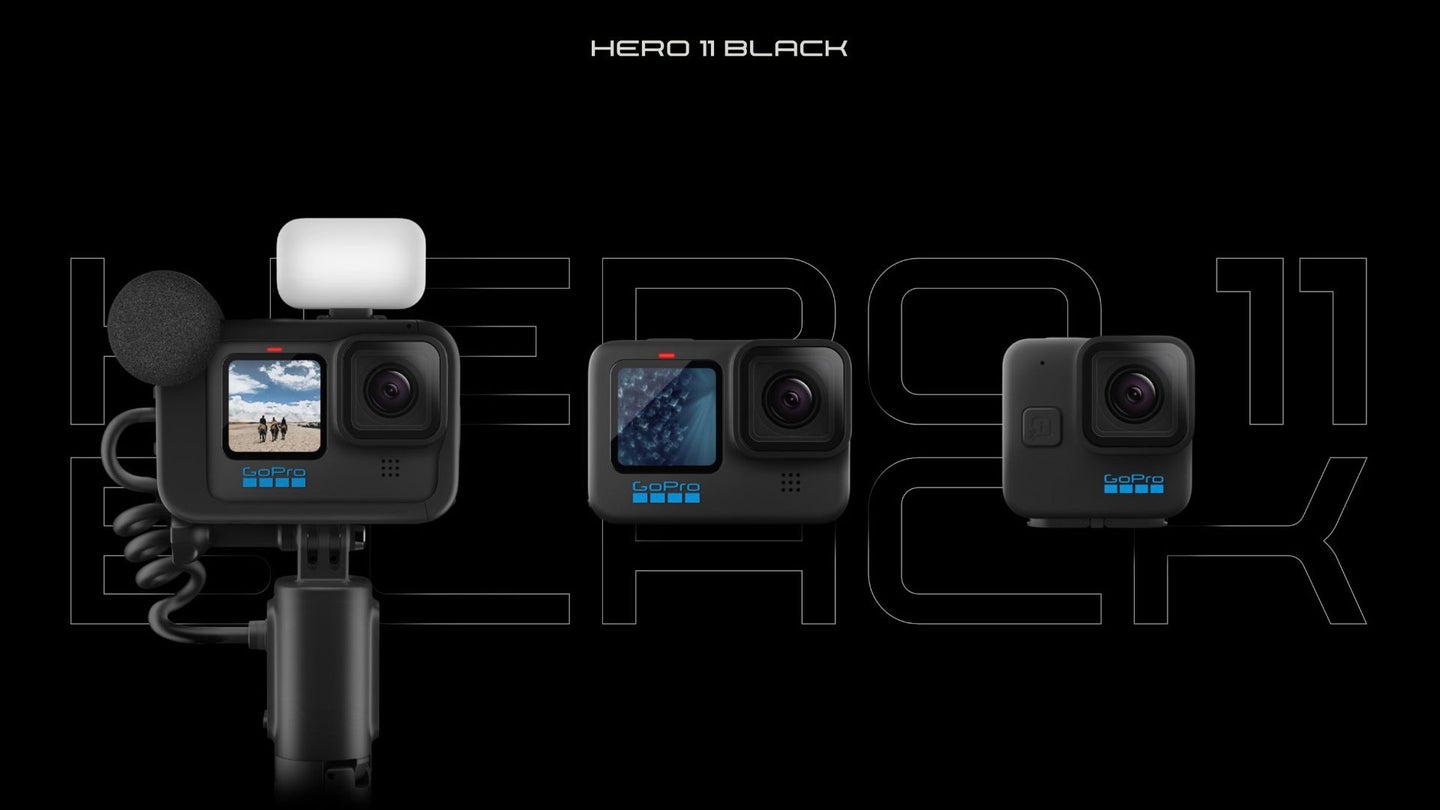 GoPro is synonymous with action sports, practically inventing the action camera niche as we know it. The company released its first Digital Hero in 2006 and has dominated the market since. But new brands like DJI are nipping at the heels of GoPro, some of which surpass the Hero10 Black in certain areas. So, when GoPro launched the Hero11 Black, Creator Edition, and Mini, we had to give you a rundown. You can get the Hero11 Black and Creator Edition now but have to wait until 10/25 for the Mini.

Aesthetically not much is changing. The notable improvements are where all good things lie, on the inside. The latest models use a larger 1/1.9-inch sensor that enables them to shoot in an 8:7 aspect ratio, which is almost a perfect square. The real-world benefit is that you can record a wider area and change the aspect ratio in post-production editing. So you can share a 9:16 vertical video on social media and 16:9 cinematic footage on YouTube, all from the same piece of original content. The new sensor captures 27-megapixel photos, which is a step up from the Hero10’s 24-megapixel shots. You can also pull 24.7-megapixel screenshots from footage recorded in 5.3K.

The new sensor captures 10-bit color, and it can’t be understated how much of a leap this is ahead of the previous iteration’s 8-bit capability. Capturing footage in 8-bit means that your camera can render 16.7 million colors, whereas capturing it in 10-bit means it renders one billion colors. The upgrade will be most noticeable when recording gradual color changes, like a blue sky, for example. But this new feature will mainly benefit people who do a lot of post-production editing, as they’ll have much more data to work with.

The new models feature an ultra-wide HyperView mode, which has the widest 16:9 field of view ever on a Hero camera. This should give a greater impression of speed to the viewer, making it useful for anyone who records fast-paced activities such as motorcycling, off-roading, or skiing. Once you’ve captured your adrenaline-fueled activities, the new models will automatically upload your clips to the Cloud and create highlight videos, which are then sent to your phone via the GoPro Quik app. This feature is only for people who avail of GoPro’s subscription service.

GoPro is already leading the pack with its built-in image stabilization, and the brand intends to take that a step further with HyperSmooth 5.0. But the company is taking Horizon Lock a quantum leap further, as it will keep your footage steady even if the camera rotates a full 360 degrees, compared to the previous model’s 45-degree limitation. This makes the new models incredibly enticing for anyone who captures footage using an FPV drone with an attached action camera. The TimeWarp 3.0 feature is also an improvement over the previous model, as it can record in 5.3K.

Apart from the ‘11’ on the side, you wouldn’t tell the Hero11 apart from the Hero10 because the body is the same. And, for many, this isn’t a bad thing. The exterior has remained unchanged since the Hero9 because it’s working relatively well. The Hero11 Black Creator Edition is essentially a Hero11 connected to a Volta hand grip with built-in buttons for one-handed camera control. The creator package also includes a light and media mod. The final addition to the lineup is the Hero11 Black Mini. GoPro has trimmed the fat (screens) for this model, so it’s much smaller but still features the same performance upgrades as its bigger sibling. All the new models come with GoPro’s Enduro Battery as standard, but it’s built-into the Hero11 Black Mini’s body.

For serious content creators, like those who do a lot of post-production work or use FPV drones to capture footage, the new GoPro Hero11 Black will be worth the upgrade. Everyday users will still benefit from the improved dynamic range and features like HyperSmooth 5.0. But, for some people, the Hero10 Black will be the best choice. It records in 5.3K60 and 4K120, just like the new models, and produces incredible footage. GoPro has already lowered the Hero10 Black’s price, but when the price falls even further, it’s going to be a steal.

Read More From the Garage

The post GoPro Launches New Hero11 Black Lineup to Take On DJI and Insta360 appeared first on The Drive.