Hamilton’s Record Win Streak Is Over, and Verstappen Can’t Ever Match It 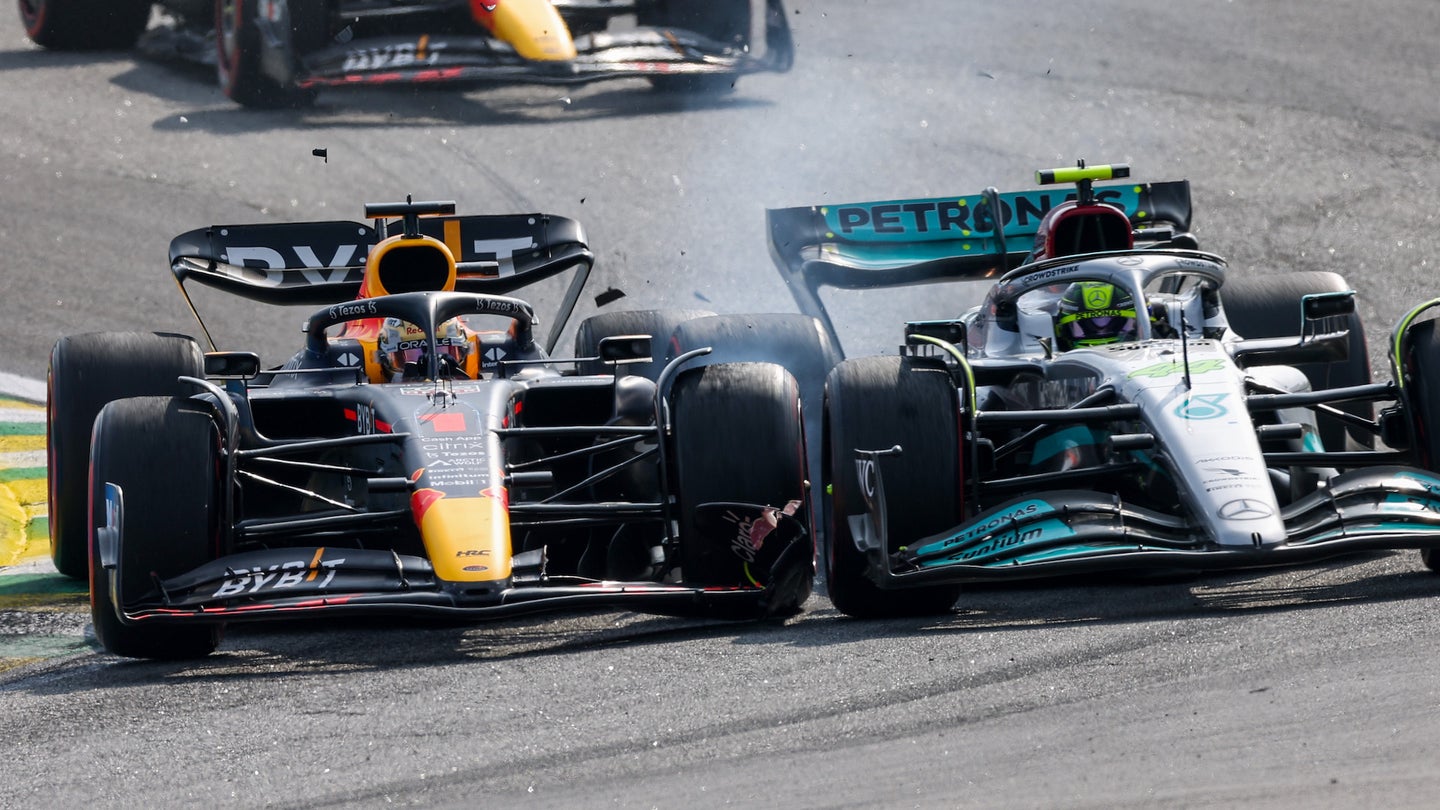 For the first time in Lewis Hamilton’s Formula 1 career, he has reached the end of a season without winning a single race. Max Verstappen saw to that, leading a resurgent Red Bull Racing to its first constructors’ title in almost a decade, elbowing rivals (and teammates) out of the way at every turn. But while Verstappen’s dominance in 2022 may have put an end to Hamilton’s record-setting winning streak, he isn’t even halfway to beating it—and there’s an element of it he can never surpass as long as he races in F1.

Hamilton has been a winner since his rookie season in 2007 when he debuted for McLaren-Mercedes alongside reigning double-consecutive world champion Fernando Alonso. He faced towering expectations as possibly the most-hyped young driver of all time, and before even reaching the summer break, he met those expectations with a win in Canada. Then another in the U.S., and yet another in Germany, before coming back to win a fourth in Japan. At the end of the year, he finished tied for second with his teammate, a scant single point behind Kimi Räikkonen. Even on its surface, it was clearly the beginning of something great, but a deeper look reveals just how exceptional Hamilton was from year one.

During his rookie year, Hamilton became one of only seven drivers in F1 history to win a race in their first season. (That’s excluding the Indy 500, where F1 raced ’til 1960, and the winners of the 1950 season who were already veteran Grand Prix racers.) Every single one of those rookie winners is a statistical anomaly in their own right, and most of them are drivers you’ve heard of. But even among F1 nobility, Hamilton’s record stands almost on its own.

This is a class made up largely of elite drivers, with four of the seven going on to win a drivers’ title, and another four taking at least one more win the following season. Only three—Hamilton, Stewart, and Villeneuve—belong to both clubs, while only Villeneuve shares Hamilton’s honor of winning more than one race in his first season, with four apiece. And while Stewart took five years to reach the peak of a title, Hamilton and Villeneuve etched their names into the champions’ ledger in only two. (Curiously, both went on to dabble in music, with… varying success.) But while Villeneuve started just Foolin’ Around after his title, and never won another race, Hamilton was only just getting started.

Over the next 13 years of his F1 career, Hamilton chalked up at least one win per campaign. That’s not attributable to the dominance of 2014-onward Mercedes; Hamilton’s streak had to first weather the years of the Brawn, then Red Bull ascendancies. Through it all, the indefatigable Hamilton found ways to patch together at least one win in every season from 2009 to 2013—and more than one in four of those five. All of this in middling McLarens and Mercedes that, despite fellow race-winning teammates, finished no higher in the constructors’ titles than fourth. (That’d be like winning a race in this year’s Alpine.)

But what was an outwardly risky move in 2013 to an inconsistent Mercedes-Benz works team turned out to be a shrewd one, because it carried his win streak clear into orbit. With his first win of 2014, Hamilton broke into the top five longest winning streaks with eight consecutive seasons. As we all know, he wasn’t content tying with Nelson Piquet; he commenced Hammer Time and won six of the next eight titles, and fought his runner-up finishes to the literal last lap in both cases. In 2016, it was a futile attempt to back his teammate into the opposition, while in 2021, he lost out to what the FIA ultimately acknowledged to be a bad officiating call.

Still, with another eight wins under his belt, that brought Hamilton to 15 straight winning seasons, tying the all-time record of Michael Schumacher. Note, however, that Schumacher’s record is slightly sullied by a championship disqualification for… Well, driving like an absolute dick.

Ironically, dickish driving put to bed Hamilton’s winning streak in 2022. With a finicky, off-pace Mercedes that didn’t hit its stride until the end of the season, Hamilton had vanishingly few chances to fight for wins. His best chance came in Brazil, where he and Verstappen got tangled on the Senna S, causing him to run out of laps before catching his teammate George Russell, who ultimately went on to win his first-ever race.

Perhaps if it weren’t for that incident, or if Mercedes had made fewer bad strategy calls, Hamilton’s streak might be intact—not to mention the longest in history, at 16 seasons. But looking back, we can posit an infinite number of hypotheticals that could’ve changed the course of history. Agonizing over what-ifs is a dead end when you can’t alter the past; what’s done is done. Hamilton himself believes as much:

“I’ve moved on from it. I refuse to live in the past,” Hamilton told Motorsport about the outcome of the 2021 season. “When you hold on to some negativity, when you hold on to hate or whatever it is, it is just holding you back.”

“I’m going up. And I am going forwards, regardless of what’s happened in the past. I chose not to dwell on it. There is nothing I can do about back then. I gave everything.”

As for the man he lost out to, Verstappen, he’s about where Hamilton was in 2013. He has seven straight winning seasons and his career yawning in front of him at age 25. He even has one more title than Hamilton did in his seventh season. But Max isn’t in his seventh year, he’s in his eighth: he spent his rookie year at Toro Rosso, a mere Formula 3 promotion who hadn’t yet earned his bosses’ favor. He entered F1 unproved, not with the trust of Hamilton’s admission to the winning McLaren as a greenhorn. He never got a shot at a win in his rookie season, possibly traded away for his meteoric, precocious rise to F1 in the first place. He’ll never challenge for the honor of the longest streak starting in a rookie season—if anyone ever will.

The rookie win is a rare opportunity that escapes the vast majority of F1 drivers throughout history. Statistically, it only happens about once a decade, and even then disproportionately for drivers who wind up in the pantheon of greats. That’s not to say we won’t see a Hamilton-level driver ever again, any new year could be one we see a driver who burns as bright as Lewis. The odds are incredibly long, but as Murray Walker would remind us, “anything can happen in Formula 1, and it usually does.”

The post Hamilton’s Record Win Streak Is Over, and Verstappen Can’t Ever Match It appeared first on The Drive.