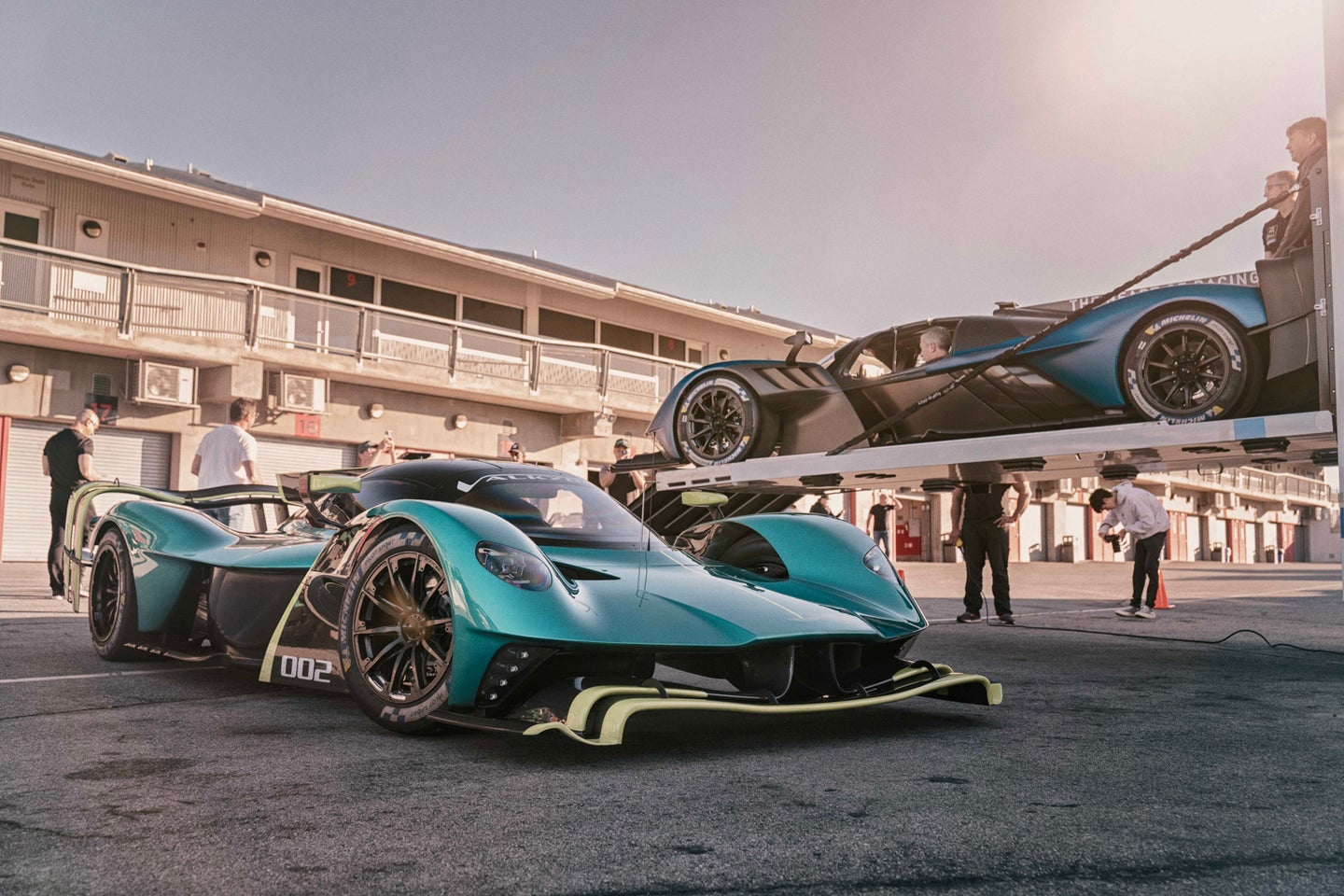 Our own Mike Spinelli had the privilege to ride shotgun in the Aston Martin Valkyrie AMR Pro last month, showing us just how violent the experience can be from inside Aston’s hypercar. And while the footage was almost painful to watch, what wasn’t painful was the sound of the high-revving Cosworth V12 engine. Now, we get another chance to listen to it courtesy of YouTuber Evan Lewis, who was able to capture the otherworldly shriek of the AMR Pro at a recent test in Laguna Seca.

Lewis got to witness the Valkyrie AMR Pro after learning of the Hypercar Invitational event at the famous track during a cross-country road trip in his Audi RS6 Avant. While at the two-day event, Lewis placed a winning bid (all winning bids went to the Make a Wish Foundation) on a passenger ride in the AMR Pro. Being the photographer and videographer that he is, Lewis propped up Leica SL2 and SL2S cameras at various points on the track to record the AMR’s sound.

Shockingly, all of the on-track sounds heard in this video (except onboard) are recorded directly by the cameras mentioned above, meaning no separate mics attached to the cars and no sound editing—yet the Aston still sounds glorious. Lewis’ thrilling onboard video below shows just how fast and capable the Valkyrie AMR Pro really is.

That 6.5-liter Cosworth engine revs to a staggering 11,000 rpm and, at full chat, it sounds like a ’90s F1 car. At peak power, the AMR Pro makes 1,000 horsepower and 546 pound-feet of torque, but on that day at Laguna Seca, it was only running at about 800 horsepower due to the track’s layout.

Just to give you an idea of how violently fast the AMR Pro is, it’s said to run a lap of 3:20 around the Circuit de la Sarthe, where the 24 Hours of Le Mans is held. For comparison, the fastest lap in Le Mans history was 3:14.791, from a Toyota TS050 Hybrid prototype racecar. So the Aston Martin Valkyrie AMR Pro, which was technically for sale to a very small sector of the general public ($4.2M before markups), is only a few seconds shy of a prototype Le Mans race car.

“[Aston Martin pro driver] Ian James explained to me that he wouldn’t be able to hear me if I felt ill so I would have to give him a thumbs down if I was about to throw up all over the hypercar’s carbon cockpit. Thankfully, the only feelings I experienced while riding in the car were that of joyful and awestruck emotion,” said Lewis.

Admittedly, the AMR Pro version isn’t road-legal and is meant purely for the track. The standard Aston Martin Valkyrie, though, is a road-legal hypercar with the same V12 but it also gets an electric motor to help increase power to 1,160 horsepower and 663 pound-feet. It’s obviously not as track-capable as the AMR Pro and won’t set any Le Mans lap records but it’s still very quick. And, because it has the same Cosworth V12 that revs to the same 11,000 rpm, its exhaust note is as delicious as the AMR Pro’s.

The post Hear the Aston Martin Valkyrie AMR’s V12 Howl Like a ’90s F1 Car appeared first on The Drive.