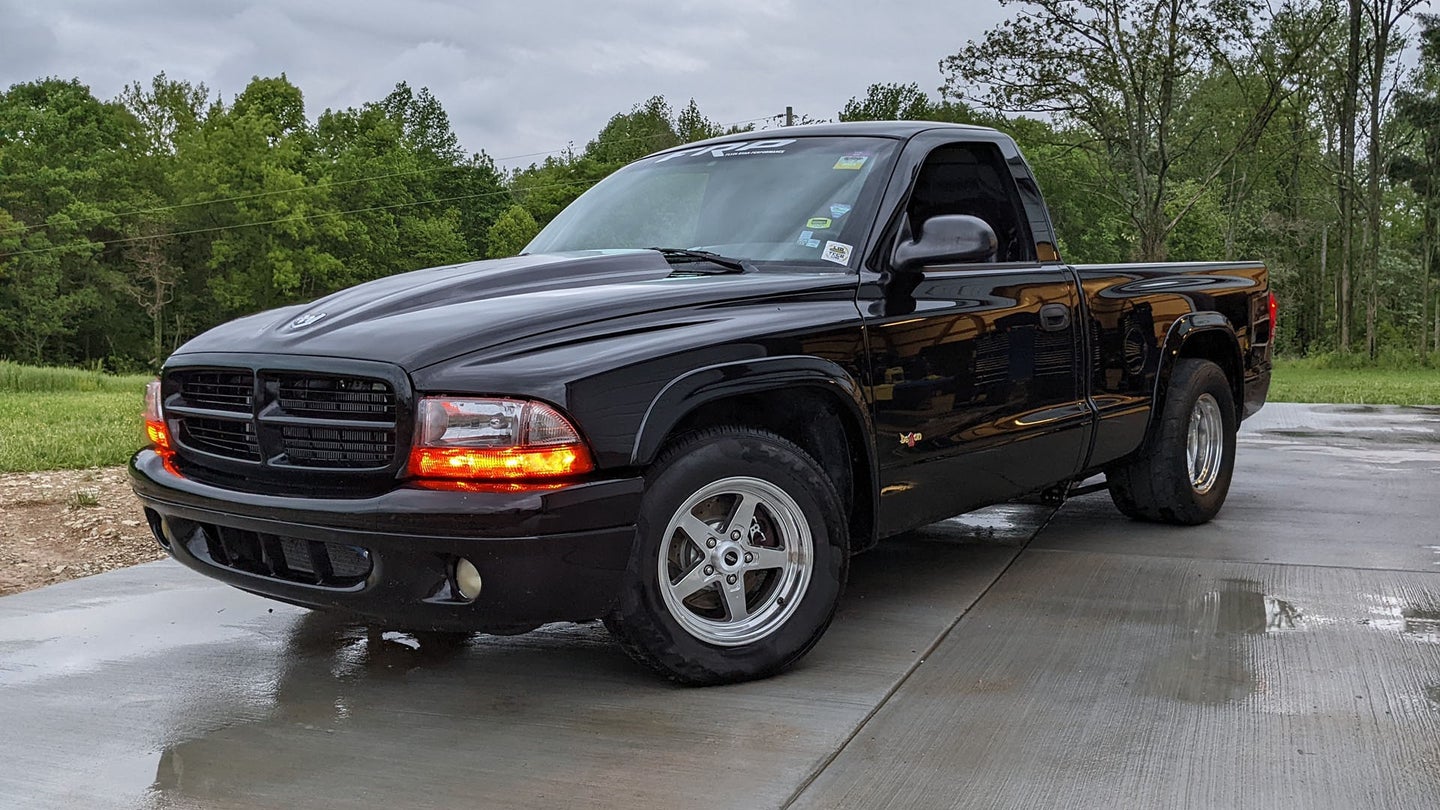 Small-ish truck, massive engine. It’s a combo you gotta love to see. This 1998 Dodge Dakota with a 6.2-liter Hellcat Hemi is a prime example. Not only does it have the 700-plus-horsepower beating heart of one of Dodge’s soon-to-depart muscle cars, but it’s also a stick shift car that’s set up for seriously quick passes on the drag strip.

The car was built by Greg Snyder, a through-and-though Mopar guy who was one of the first people ever to complete a Hellcat swap at home. He bought the truck in 2009 on Craigslist as a daily driver. At the time, it had a 318 cubic-inch small block and a five-speed manual. That, of course, was not enough.

The 318 was hopped up and was acceptable, performance-wise, for Snyder. At least for a little while.

“I put heads on it and a camshaft in it and a Kenne Bell supercharger on it,” he told me. That brought the truck down into the low 13-second range. Then, the transmission blew up. The 318 was then swapped for a 392 which brought the truck further down into the mid-12s. But a wrecked Hellcat and Dodge’s standalone ECU for its hot new motor came along and, well, it was just too tempting. Gradually the new 6.2-liter supercharged V8, a T56 six-speed from Tremec, and a Ford 8.8-inch rear end all came together in the truck, which now runs low 10s on the quarter mile with help from slick tires. That’s faster than a new 2023 Z06 Corvette, for reference.

Snyder said a few parts of the swap were a bit tricky, but overall the cooling system is what’s giving him the most headache. The radiator in the front of the truck cools the supercharger, and it’s straight out of a Dodge Neon. “Over the summer, I actually put a ZL1 Camaro cooler in it which looked a lot better but it sprung a leak almost immediately,” he said. “I was slamming the truck back together for Moparty (a drag racing event), so I just put the ugly one back in for now.”

The best part of all of this is it’s still a pickup truck. Snyder takes the car to drag racing events with slicks in the bed, puts them on and runs a few passes, and then swaps them out again and drives home. “I drive it all over the place. I don’t have a trailer, so I have to borrow one if I want to do that,” he said. The first year a Moparty was held, he drove 500 miles to the event with everything he needed in the bed. “I’ve probably put 25,000 or 30,000 miles on it,” he said.

This has all convinced me. We need more Hellcat-swapped mid-size trucks. They’re just downright practical. A Ram TRX is too big. I want to see more of this.

The post Hellcat-Swapped 1998 Dodge Dakota Pickup Is the Ultimate Mid-Size Monster appeared first on The Drive.