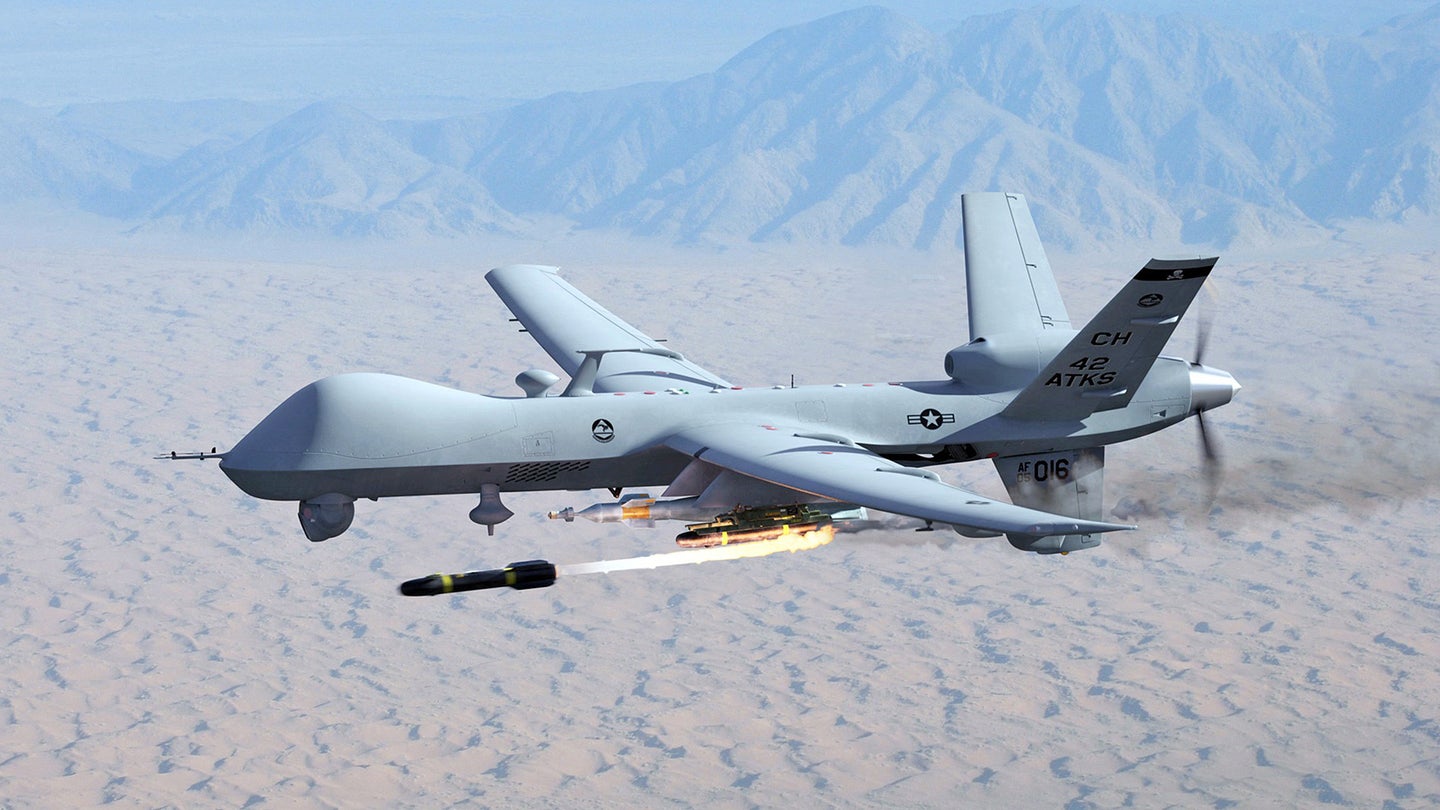 The Air National Guard Air Force Reserve Command Test Center, or AATC, has revealed that it had tested a new version of the AGM-114 Hellfire missile modified to achieve much longer ranges. The missile was launched from an MQ-9 Reaper, which could signal a significant increase in the drone’s stand-off range when employing the updated Hellfire missiles.

AATC led the test of what is being designated as the new AGM-114R-4 long-range Hellfire missile during this year’s biennial Valiant Shield exercise held in June. The test was reportedly also meant to evaluate the system’s associated ‘weaponeering’ software. The AATC is claiming that AGM-114R-4 can fly roughly three times as far as earlier variants of the missile, which made it so the recent test ostensibly resulted in the longest Hellfire shot taken to date.

Interestingly, the AATC even claimed that the test was also beneficial in demonstrating the AGM-114R-4’s potential to “double the MQ-9’s standoff range,” which would provide the drone with the “ability to engage threats while maintaining a safe distance out of the threats ability to counter-strike, which is crucial to survivability in a contested environment.” This is especially notable considering how the Air Force has been talking about scaling back Reaper operations because of the drone’s perceived vulnerability in higher-end conflicts.

Overall, however, details about this evaluation remain limited. The War Zone has reached out to the AATC for additional clarification on both the origins and the future of this capability, especially as it relates to the MQ-9, but has yet to hear back.

In an effort to gain some perspective on the significance of this recent test, it is important to have a basic understanding of the AGM-114 series’ and the MQ-9’s current performance specifications. To start, AGM-114 Hellfire is a family of primarily short-range air-to-ground, and now sometimes anti-air, laser-guided (apart from the AGM-114L Longbow Hellfire which uses radar homing), missiles designed by Lockheed Martin. Hellfire is used by dozens of countries on many platforms and was initially designed to serve an anti-armor role, but has since evolved to take on many other types of targets. Above all else, it became a staple weapon of the Global War On Terror.

The missile is powered by a solid propellant rocket motor that allows it to reach its operational range of anywhere between four to just under seven miles (seven to 11 kilometers). This means that, if the AATC is accurate in its announcement, the modified long-range AGM-114R-4 could reach up to around 21 miles under optimal conditions. Even if half this number is realized, it is a major capability leap that offers a big boost in flexibility for platforms employing it.

Assuming that this new long-range Hellfire underwent modifications to its rocket motor to increase its range, current advancements in rocket propellants could mean that the new variant wouldn’t necessarily end up being that much longer than its standard 64 to 69-inch length, although we don’t know exactly what the new configuration looks like at this time. Major upgrades to the missile’s software and autopilot that can allow for tailored flight profiles depending on the target situation can also extend range.

At sea, some Littoral Combat Ships are also being equipped with them, as well. Finally, Stryker-based M-SHORAD short-range air defense systems also use Hellfires for countering low and slow-flying threats. Missiles belonging to the AGM-114 family are armed with a variety of warheads ranging from the blast fragmentation type to high-explosive anti-tank, thermobaric, and even more ‘exotic’ types, but more on that in a minute.

The AGM-114 has always been one of the MQ-9’s primary armaments. With a payload capacity of 3,750 pounds, the drone is well-equipped to carry its usual combination of four AGM-114 missiles, GBU-12 Paveway II, GBU-38 Joint Direct Attack Munitions, GBU-49 Enhanced Paveway II, and GBU-54 Laser Joint Direct Attack Munitions, as well as all types of pods and fuel tanks. Even air-to-air missiles have been tested on the MQ-9.

However, in September 2020, a new software update for the drone that was facilitated under an Air Force initiative dubbed “Operational Flight Program 2409” allowed the service to arm the MQ-9’s pylons otherwise used primarily for bombs with four additional AGM-114s. The software update brought the total number of Hellfire missiles an MQ-9 can carry to eight.

There is also the question of how this recent test could influence the development of Joint Air-to-Ground Missiles (JAGM), Hellfire’s intended (at least partial) replacement. Considering that the initial version of JAGM is evolved from the AGM-114R, a modded long-range ‘R’ variant could translate to an increased range for JAGM, too, which uses a multi-mode seeker (radar and laser) as opposed to the standard AGM-114R’s semi-active laser homing.

Essentially, whichever new features the AATC recently demoed could be combined with other capabilities in the future, including the JAGM seeker, which would make better use of the extra range due to the limitations of the MQ-9’s laser designator’s range. The JAGM seeker can also hit moving targets in any weather conditions.

For now, though, there are unfortunately more questions than answers. To better understand what exactly this AGM-114R-4 will offer both the Hellfire family and the MQ-9, many facets of the system need to be better understood. This includes how exactly the missile’s guidance system has been modified to make use of the extra range and whether or not it will require a separate asset to ‘paint’ the target downrange for the launching MQ-9 if it retains its single-mode laser seeker.

This wouldn’t be the first time that the U.S. military has been particularly shadowy about a new Hellfire variant, either. For the past few years, The War Zone has been reporting on the development and employment of the AGM-114R9X missile, which has six pop-out, sword-like blades as opposed to a traditional explosive warhead. While there remains very little official information about the missile, various sightings of it have turned it into a relatively open secret.

Giving the MQ-9 more standoff range will enhance its survivability under some threat conditions, especially when operating on the outer fringes of an enemy’s integrated air defense system. But just the MQ-9 loitering overhead can be a tell to potential targets in far less threatening airspace, so giving it the ability to standoff farther could improve its abilities by decreasing its chances of detection when it comes to hunting and striking high-value targets, too.

Beyond the air-launched advantages, this missile would be hugely beneficial for sea-launched applications, such as the LCS. Beyond that, it could be extremely beneficial in servicing Hellfire’s growing surface-to-air role, as well.

We will report back once we get more details about this intriguing Hellfire evolution from AATC.