Help, I Got Stuck In a Snowbank At My In-Laws 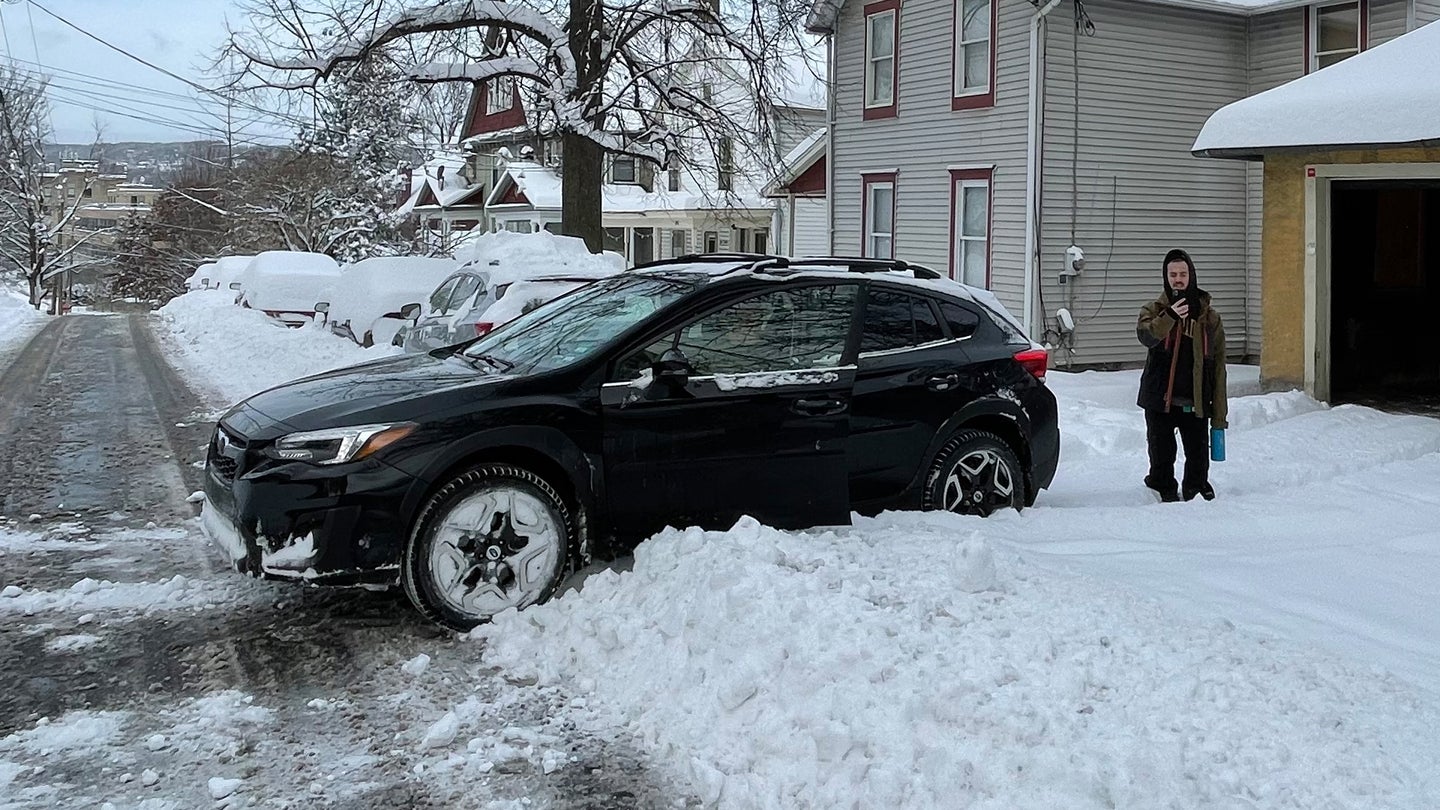 Wait, you’re real? I thought you were just a figment of my imagination circa 2015.

You thought I was a hallucination?

Honestly, yeah. The early 2010s were a trip and you absolutely could’ve been part of that. But since you’re not, what’s up?

I’m stuck in a snowbank.

That doesn’t sound too bad.

In front of my in-laws’ house.

Before or after the visit?

And after you told them to get bent for pressuring you about spawning more offspring in the hopes of building out a basketball starting roster for your mother-in-law to aggressively coach into a D1 team?

How do you always know these things?

I implanted a subdermal transponder and microphone into your head. Moving on.

Well, I was backing out of the driveway, railing against them to my significant other when an icy patch pulled me into the snow bank.

Always watch out for the icy patch.

Asking for help is out of the question given what you said. Seriously, you need to only let Aussies say that word.

It was a heated discussion!

It was in reference to your mother-in-law’s elderly aunt.

I will not apologize to Aunt Dotty!

Well, you’re SOL on the help aspect, so let’s get you unstuck before your father-in-law begins laughing in your face.

Look around the car for supplies.

I’m not sure what I’m looking for?

Why would I have a flamethrower?

Have you never watched John Carpenter’s The Thing?

You say movie, I say film proving the use cases of every-day-carrying a flamethrower.

No one should sell you a flamethrower.

And yet, Elon did! OK, so we’re gonna have to do this the old-fashioned way.

Succumb to frostbite and eat your partner.

We left the cranberry sauce in the house.

Well, then this recipe doesn’t work.

So how do I get this Subaru Crosstrek unstuck?

You would drive a Subaru Crosstrek.

I’m sure it is for you fancy Vermonters.

I’ll have you know I’m from Connecticut!

Same difference. But OK, OK, let’s get on with this. First, you’ll need to get out of the car. And yes, I know they’re watching.

I’ll never live this down.

Take a deep breath and throw yourself into the snow bank.

You’ll never live this down, might as well bury yourself in the snow. Your significant partner will move on. They’ll remarry. Your in-laws will love them a lot more than you. Win-win.

How is that a win-win?

Did I not just explain this?

I’m not jumping into a snowbank never to be seen again.

Help me get this car out of the bank, please.

Fine. Which tires are stuck?

Looks like the back left is off the driveway and into the grass. And the back right is packed up with snow.

OK, so do you have anything to use as a shovel?

How do you have a shovel in your Connecticutonian Subaru Crosstrek but not a flamethrower?

We’re known as Connecticuters and consumer shovels are more common than consumer flamethrowers.

Our world is deeply flawed.

You’re telling me. I mean, I’m getting help from you!

You know I could tell Aunt Dotty what you said about her.

And give her your phone number.

You should be for saying all those things about Aunt Dotty.

OK, so I have the shovel, what next?

Start by digging out the rear tires until you see the pavement.

Your father-in-law is outside with a beer laughing at you?

…engage. Why did you just say that to him?

Because he had it coming!

But where will I learn about all the evil cabals and fun swear words?

You know, I like it more when I was the unhinged lunatic in this relationship.

We’ll deal with that fallout later, but have you shoveled clear the rear tires?

I still don’t have one.

Why haven’t you ordered one already?!

Where would I even find one?

I mean, I’m definitely not cultivating a pool of giant cyberpunk sharks that can hack the grid and shoot lasers out of their gills. Nope, not me.

What sort of sharks?

OK, I’m going to need you to get back in your car.

The guy who sells Street Sharks?

Do you work for Discovery Channel or something with all this shark talk?

Don’t you dare associate me with them.

(Grumbles) But you’re going to want to grab the shifter, drop it into reverse, and channel all that family rage into the gas pedal. Now hit it!

We moved a little, but my father-in-law is now sitting in a lawn chair laughing.

Well, that can’t stand. Drop it into drive and gas it again! And wiggle the wheel as you do so, that might just help.

But you kept your foot on the gas pedal and you crashed into your in-law’s house?

And it’s on fire?

Well, at least you can get a better car and are no longer invited to holiday dinners!

The post Help, I Got Stuck In a Snowbank At My In-Laws appeared first on The Drive.