Here Are What the Cars of Mean Girls Could Be Today 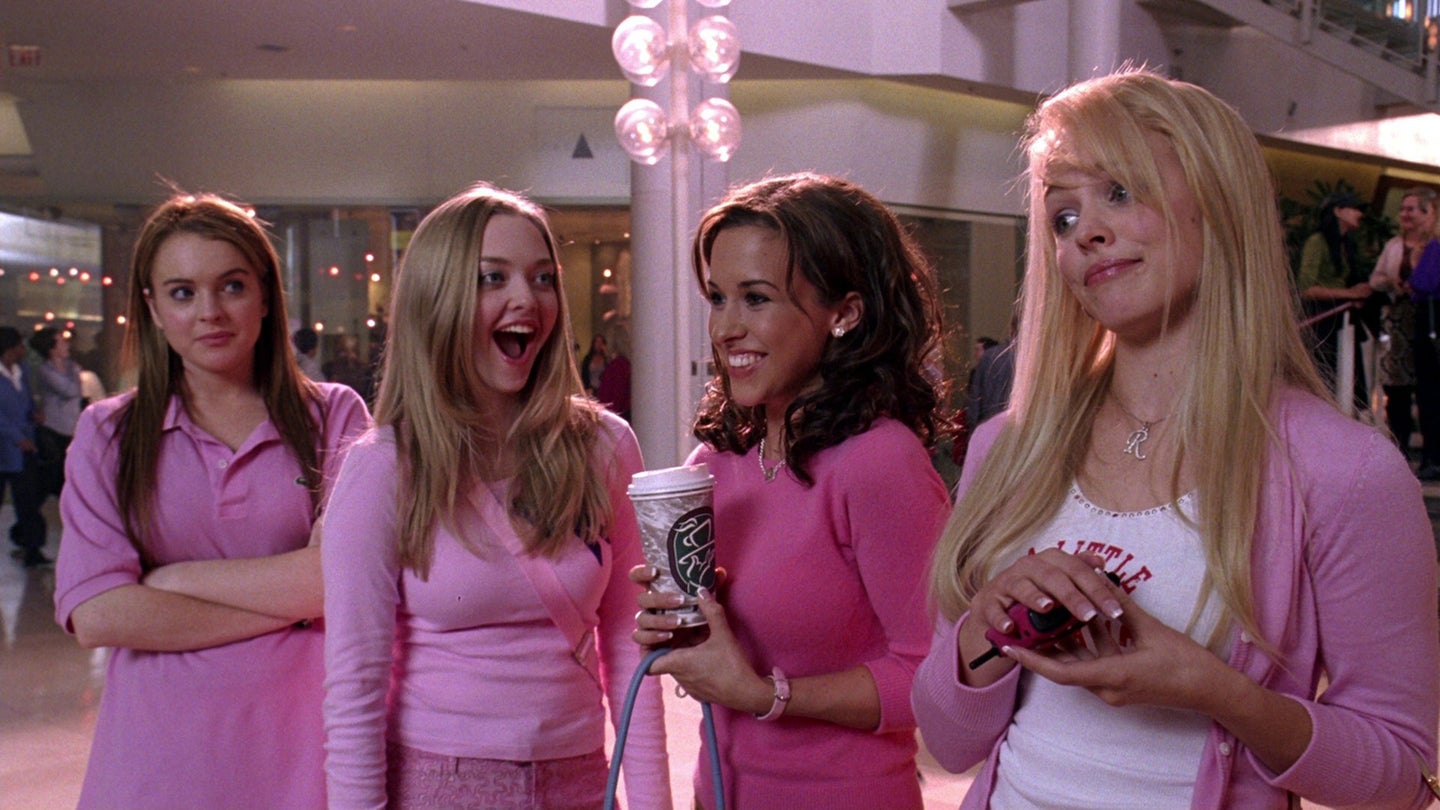 It’s Oct. 3, so you know what that means: Happy Mean Girls Day to all who celebrate! Loving and referencing this movie apparently makes me an Elder Millennial, as I was rudely reminded today on Twitter, but no matter. It’s an iconic cornerstone of modern culture, one that’s still significant in the present zeitgeist. But now we must ask ourselves: What would the characters all drive today?

Mean Girls came out in 2004—god, that makes me feel ancient—and that makes the movie old enough to vote and be drafted but not old enough to buy alcohol. Such is the way of things here in the United States! But 18 years is a long time in car years. The industry and market today are very different from what they were in 2004. As I’ve written about before, all of the cars in the movie were clearly chosen with extreme care. So, it would only be right and fitting to choose what everyone would drive in 2022 with the same amount of thoughtfulness.

Let’s start with Cady Heron’s (Lindsay Lohan) parents. As two academics living in the very ritzy neighborhood of Evanston, Illinois, I do think they’d be a little more budget-conscious than the rest of Cady’s friends. In the original movie, they’re seen driving a 2000 Honda Insight, a car that’s economical both at the pump and for the wallet. While it’s not clear if Cady’s parents bought the Insight new or used, I’d err on the side of used since they said they needed to come back to the U.S. from Africa in time for Cady to enroll in public school for her junior year in 2004. That means they almost certainly picked the car up used.

That being the case, I think Mr. and Mrs. Heron would definitely go for something that maximizes both affordability and efficiency. They’re probably thrifty with their money, would be willing to do some research, and would most likely end up with something like a certified pre-owned Chevy Volt. It has the hatchback silhouette of the Insight, and as a plug-in hybrid, it’s also good on gas. Very sensible.

Regina George’s (Rachel McAdams) original 2002 Lexus SC 430 has since ended production but fear not; Lexus still sells a two-door, V8-powered convertible in the form of the Lexus LC Convertible. Regina’s would be a couple of years old at this point—her parents might have bought her a very gently used one—or maybe it’s new outright. Regardless, it’s the perfect car for a 16- or 17-year-old queen bee. The four seats are a requirement because “get in, loser, we’re going shopping,” and the silver paint is a must because Regina George “has two Fendi purses and a silver Lexus.” We cannot disrupt the order of the universe.

Gretchen Wieners (Lacey Chabert) “is totally rich because her dad invented Toaster Strudel.” And just like the 2002 Cadillac Escalade she uses to roll up to Cady’s illicit house party in, the Cadillac Escalade is still around and kicking, and even more opulent and luxurious than ever. Bless. Just like Regina, Gretchen’s Escalade is either very gently used or brand-new off the lot. Only the best. There’s no need for the V version here, either, the regular Escalade will do fine. Remember, it’s not about what’s under the hood. It’s about what the badge means to everyone else.

Also, girl, it’s OK to wear those white gold hoops. You deserve them.

What better car to push that 1 a.m. curfew in than a 2021 Chevy Malibu, as driven by Cady’s real friends Damian Leigh (Daniel Franzese) and Janis Ian (Lizzy Caplan). This is definitely Damian’s parents’ car since it was only a year old in the movie and he’s bound by a curfew. If I was a parent—a normal mom, not a cool mom like Mrs. George—I don’t think I’d let my newly driving teenage child own and drive a new car.

The Chevy Malibu it is. First, because the Ford Taurus is no more, and second, because I do believe the spirit of the Ford Taurus lives on in the Chevy Malibu. Its purchase doesn’t quite have the sheen of a Honda Accord or Toyota Camry, but I think more likely than not, Damian’s parents got a really good deal on the Malibu.

Don’t ask me to explain it, because this isn’t based on science, but I think Aaron Samuels (Jonathan Bennett)—Regina’s “high-status man candy”—would emerge in 2022 as a 2011 Toyota Tacoma driver. His original 1993 Ford Ranger was a quietly humble thing, not flashy, and just like Aaron himself. Even though he was known for dating Regina, Aaron actually turned out to be a nice and down-to-earth guy.

The used Tacoma, solid and reliable in its own quiet way, mirrors this. It knows what it’s about and it’s comfortable doing it. It’ll go to a Halloween party dressed up as a football player. It’s trustworthy and something you’d feel safe having a long-distance relationship with. That’s the truck of someone who only cares about “school, his mom, and his friends.” Regina says that like it’s a bad thing, but I think it sounds nice. High school was a long time ago for me, why do you ask?

The noble chariot that brings the North Shore mathletes to the state championships is Tim Pak’s (Wai Choy) 1996 Ford Windstar. This is most definitely a parental hand-me-down and a great one for hauling all your friends around with. The minivan market has further dwindled since then, but I think we can land on a 2004 Honda Odyssey here. The things were everywhere in the high school pickup line when I was a student and would make for a great third- or fourth-ownership car.

Also, a 2004 Odyssey and a ’96 Windstar have the same exact vibes. You feel it too, right? The limit does not exist.

In 2004, the BMW X5 was the biggest BMW you could buy, so, of course, the image-, brand-, and status-conscious Mrs. George (Amy Poehler) would have one. Hers was a 2000, so she likely bought one new when it first came out and had it for around four years by the time the movie took place.

Right now, the biggest BMW you can buy is no longer the X5. It is the X7. And what a behemoth it is, too. Mrs. George would have 100 percent traded in her X5 for the X7 as soon as it became available, which would probably have been in 2019 and when the SUVs first became available. She’s spent a few years hulking around suburban Illinois in this thing, but don’t worry.

She’s got the BMW XM on order.

I could dig deep and offer up some suggestions as to what Ms. Norbury (Tina Fey), the math teacher, would drive (a 2006 Chevy Camaro is a strong contender). But you honestly cannot beat the vibes of a 1985 Pontiac Firebird. She’s divorced, she’s broke from getting divorced, and she bartends a couple of nights a week at P.J. Calamity’s. She’s a pusher, and she’ll push that Firebird across the planet for as long as she can.

A 1983 Ford B-600 Thomas was the school bus used in the movie—both a symbol of climax and change, as well as an object of foreshadowing. These buses are still widely used by public school systems nationwide, I’m sure, so there’s really not a replacement I feel like I could, or should, name.

So, how’d I do? Do you agree or disagree with my choices? Feel free to tell me what you think in the comments.

Or, if you’re shy, email me at [email protected]

The post Here Are What the Cars of Mean Girls Could Be Today appeared first on The Drive.