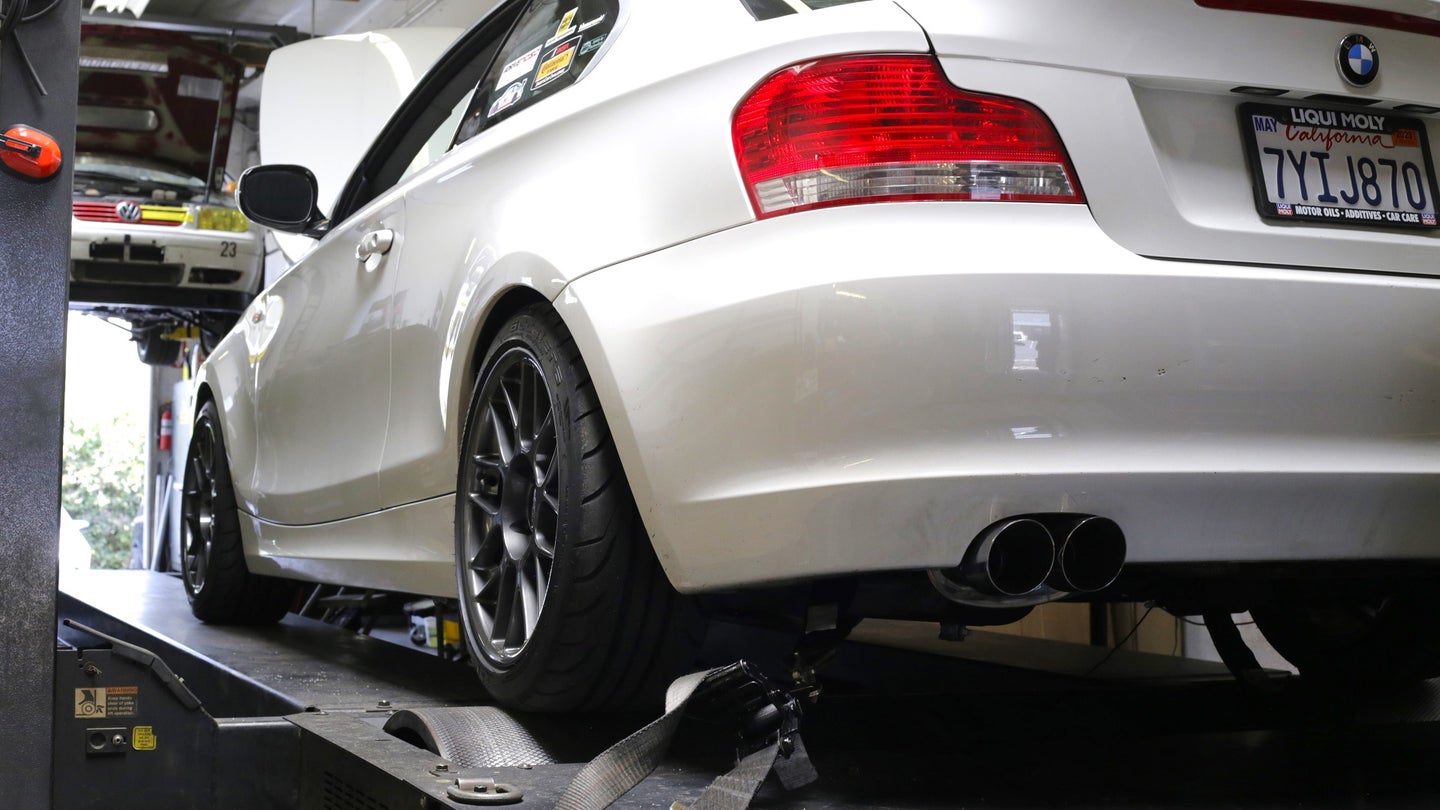 When I recently outsourced an oil pan gasket replacement to a reputable Long Beach BMW shop, the owner noted that he loved the 128’s power and asked if it had an ECU tune, besides any mild coding. As I explained that all it has is the intake and exhaust, a big ol’ light bulb lit up above my head: I must schedule an appointment at the dyno to see exactly what its fun powerband looked like from a measured perspective.

I’d been meaning to schedule a session for a while, not only because it’s just a fun experience, but also because reading the graph can help determine how healthy the engine is. Plus, being an automotive journalist, making sure I’m legitimizing my impressions properly sometimes keeps me up at night. Am I right to blabber about how great this thing is, or am I just partial due to it being my own pride and joy? Like overbearing parents who would read their kid’s school the riot act if they got anything less than an A on an exam, I should have conclusive proof before I proceed further with saying my car and mods are brilliant.

For such a task, I hit up the same person who dynoed my old Mazda 2, Toby at Advanced Engine Dynamix (AED) in Corona, California, and scheduled a sesh. The Bimmer is quite a bit different than the ol’ Deuce, so part of me was also happy to just roll up and say, “look! I now own something that should hopefully make more than 98 wheel-horsepower!”

When I rolled up to AED, he and his employee strapped the 128i down, and we got to work. I wasn’t going to do any experiments like I did with the 2, this was just going to be a few pulls to see what it’s making. I should’ve preemptively removed the N52 engine’s plastic cover, as it took a second to clamp one of the dyno system’s sensors on a coil pack wire, but it was otherwise a quick and smooth process.

Toby did three pulls, and they all sounded great with my new setup. Hearing the N52 singing inside the shop was a treat in and of itself after installing the Turner intake and Magnaflow exhaust system. The very first pull revealed exciting numbers: 202 horsepower and 181 lb-ft of torque at the wheels. That’s great from a car that was rated at 230 horsepower and 200 lb-ft of torque at the crank from the factory.

The second pull once again produced 202 horsepower and 181 lb-ft of torque, and the third was a smidge lower at 200 horsepower and 179 lb-ft. Check out that gloriously flat torque curve, and that power curve is smooth as butter. I was thoroughly relieved, as I’d been hoping it’d make at least 200 at the wheels. To me, that’s a realistically good number and proves the engine is running well.

To do some quick math: 202 WHP is 12.17% less than the factory crank figure, whereas the torque is 9.5% less. To simplify things and use a conservative 20% drivetrain loss, my crank figures might be 242 horsepower and 217 lb ft of torque—not bad for just an aftermarket intake and exhaust bolted up to an engine with 87,000 miles on the clock.

I’m happy there isn’t a tune bumbling around in its electronics, either, as I have a very good baseline for eventually installing a three-stage intake manifold from an E9X 330i and tuning it in an OEM fashion. Fellow BMW enthusiasts say this mod makes impressive numbers, and I’m thinking a visit to SoCal’s many vast junkyards in search of one is in the cards as a near-future adventure. Sure, I’d be happy about the power bump, but part of my joy is also rooted in taking the time to find and swap one in, as well as pay another visit to AED.

202 horsepower might not sound like much, especially compared to the 128’s more complex 300-horsepower sibling the 135i. But for a 3,300-pound RWD coupe that’s an immense amount of fun to drive as it sits, I find this all to be good news. Now, onto making the most of it on track.

Read More From The Garage

The post Here’s How My BMW 128i Performed on the Dyno With an Intake and Exhaust appeared first on The Drive.