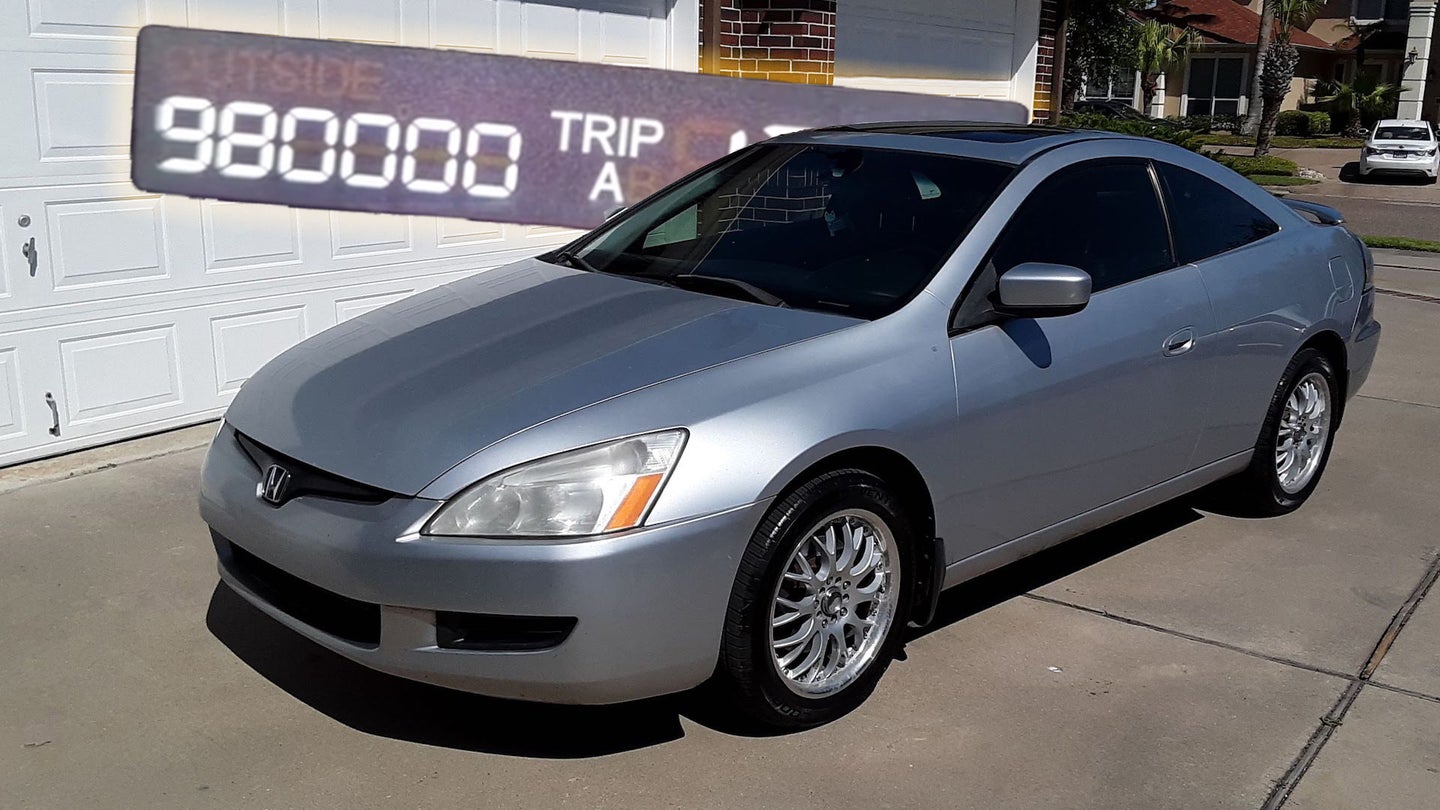 Driving a car 1 million miles is something almost none of us expect—yet many of us aspire—to accomplish. Whether or not rolling over a six-digit odometer is your goal, it’s worth knowing how those who have reached the milestone kept their cars on the road for so long. That’s why we talked to the owner of a 2006 Honda Accord who’s approaching the million-mile mark, and who’s glad to share his tricks for vehicular longevity.

Justin Kilmer owns a 2003 Honda Accord with more than 982,000 miles on its odometer. It’s a rare combination of a 3.0-liter V6 and a manual transmission, which Kilmer’s wife purchased while dating. It became their family car after their marriage, and by 2015 had racked up 185,000 miles: far past the point where many people get rid of their cars. That would only prove to be the start of Kilmer’s travels in the Accord because that was the year he took work as a medical courier.

Kilmer has delivered medicine, blood, and other supplies to hospitals, nursing homes, blood banks, and so on for years now. The job keeps him on the go and means he and his Honda average about 100,000 miles annually. He believes that at 982,000 miles, his is the highest-mileage V6 Honda on earth—and that’s with its original engine. Along his ascent, Kilmer has fastidiously maintained and kept records of his car, jotting down what breaks and when on a car that has far outlived its expected service life. His knowledge is useful to anyone who owns a car, whether or not they plan on driving as far as the moon and back—twice.

That means sticking to the factory maintenance schedule, for brake fluid, coolant, belts, and even replacing some non-consumable items like water pumps—he’s had them done with every other timing belt. Kilmer strongly advises finding a good independent, non-dealer shop that can do what you can’t (or don’t want to) do yourself. He also emphasized the importance of figuring out where you can and can’t cut corners with cheap parts.

“I have learned (at least for this car) that some parts really need to be replaced with OEM parts,” Kilmer told The Drive. “I’ve used OEM parts for: front lower ball joints, clutch master and slave cylinders, coil packs, wheel bearings, engine mounts. I’ve used other OEM parts here and there, but those are parts I’m not willing to compromise on this car. [I’ve heard] too many horror stories of people neglecting to replace the belt or using a cheap belt and having it snap usually causing engine destruction.”

Still, Kilmer has bent his own rules in a few places. Because he drives so much and changes oil so often, he switched to extended-life oil and filters, which he changes every 15,000 miles. (He still uses the recommended oil weight, though.) Kilmer also uses Redline transmission fluid (a well-regarded aftermarket brand), which he changes every 100,000 miles, and a serviceable K&N air filter serviced twice annually. They’re buy-it-once items for most people, though Kilmer had to get a second at 686,000 miles.

In fact, there are a fair amount of aftermarket parts on Kilmer’s car, from its wheels to a throaty Tsudo exhaust and Powerstop brakes. They’re just to slow brake rotor warp, even though he’s not servicing brakes often (his last set lasted 154,000 miles). He’s similarly soft on his spark plugs, only his third set, and a clutch that was only just replaced a second time at 948,000 miles.

That doesn’t mean the Accord hasn’t needed fixing over the last several years, though. Kilmer’s gone through more ball joints and tie rod ends than are worth counting, not to mention the occasional strut. Its CV axles needed replacement at 440,000 miles, while the catalytic converter burned out at 500,000. One imagines it’s approaching another replacement soon.

Items that you don’t imagine wearing out have needed fixing too, from the driver seat (its adjustment wore out) to control arms and door lock actuators. Kilmer’s Accord is on its third radiator and power steering pump, and he’s recently had to replace its wheel bearings and steering rack. And while the engine may be original, the drivetrain didn’t get this far with regular fluid changes alone.

On top of common, but infrequent maintenance items like oxygen sensors or the clutch slave cylinder, Kilmer just had to replace all the engine and transmission mounts. When he replaced the transmission, he also did the flywheel and rear main seal. That’s about as close as the engine has gotten to disassembly, the most extreme jobs were valve cover gaskets and an oil pan—its drain plug threads had stripped. Such is the power of preventative maintenance and gentle treatment, with Kilmer reporting he did 115 mph once, but never revs the V6 past 3,000 rpm anymore.

That said, the miles are still taking their toll. Kilmer has to add a quart of oil every 5,000 miles or so, and the V6 has recently developed a misfire. A compression test showed cylinder one is shot; its exhaust valve no longer seals properly. Still, he’s hoping to nurse the V6 another 18,000 miles to reach a million. When he does, he’ll give his car a heart transplant and carry on. Maybe build himself a new coffee table while he’s at it.

After all, this Honda Accord’s value at this point is as far more than a commuter or even a well-traveled family car. It has delivered vital medical supplies that have kept people alive. Kilmer hopes it’ll continue keeping him company on that journey for a long time yet.

“Other than the car’s achievement and sentimental attachment to having it for 20 years, countless families have been helped by having medicine/blood/supplies delivered to nursing homes, private residences, hospitals, and blood banks,” Kilmer said. “That’s a great legacy for this car.”

The post Here’s How To Keep a 2003 Honda Accord Running for Nearly 1M Miles appeared first on The Drive.