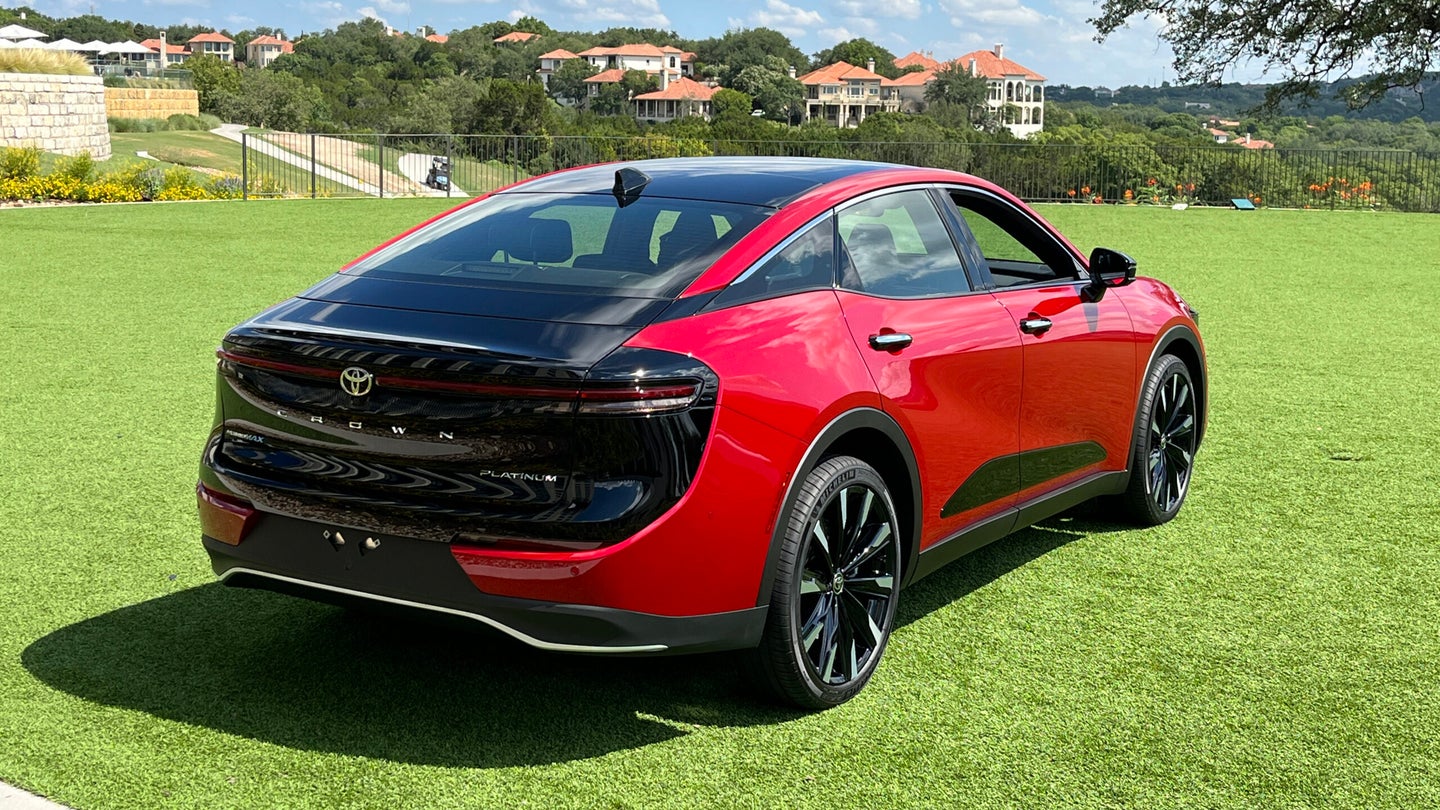 The 2023 Toyota Crown is one of the biggest surprises in car design in a long time. The version we’ll get in the U.S. defies any genre—it’s a sedan with a fully enclosed trunk that rides high like an SUV. It’s unlike anything else on the road.

But why? I spoke with Ash Hack, Toyota’s marketing manager for the new Crown to answer that question. Toyota had to do something different to interest customers who’ve grown weary of full-size sedans, Hack said.

It’s a safe bet that the Crown will handle more like a car than an SUV despite sitting nearly four inches higher than a Camry, which should appeal to Avalon shoppers that Toyota doesn’t want to lose. It just needed to repackage what Avalon buyers appreciate in a package that’s more eye-catching to everyone else. For the U.S. market, that meant bringing over the “crossover” version from Japan’s four-car Crown lineup instead of the more traditional Crown with a sedan’s ride height.

If there’s any manufacturer who has room to experiment, it’s probably Toyota, which already has every flavor of body style imaginable across the Toyota and Lexus brands. The Crown manages to stand out with styling, and thank goodness—it’s about time we had a true weirdo to get our attention.

“They were really going for a bold statement when they produced this,” said Hack. “The key design terms were ‘innovation’ and challenge.”

The front end of the car, for one, is one big geometric pattern. Toyota didn’t need all of the Crown’s front end for airflow, so much of it is taken up by a field of little gleaming triangles, with the functional grille openings above and below the pattern. It’s a way to make the grille look bigger, without sacrificing aerodynamics, said Hack.

Toyota knew that making the Crown a unique lifted sedan would be a polarizing choice. They’d done focus groups, and just like your reactions in our comments, some folks weren’t into it, but Hack says the majority of the reactions Toyota got were positive.

Despite all its flashy updates, there’s a lot that feels very familiar to the Crown. Visually, it reads like a fastback sedan copied at 125% of its actual size, similar the Ioniq 5‘s riff on a traditional hatchback shape. The Crown does the same with fastback sedan proportions.

Horizontal lines do a lot of heavy lifting when it comes to masking the Crown’s true height from afar. Its long, swoopy floating roofline, a contrasting long black panel that runs near the bottom of both sides’ doors and the narrow horizontal lines found in its lighting design all serve to emphasize the length and the width of the Crown. Even the headlights are a unique four-lens design that runs under the daytime running lights’ “light pipe,” with that light pipe running seamlessly into the ridge at the top of the front to highlight the width of the Crown. A silver character line towards the bottom of the grille also helps break up the black void and further emphasizes width over height. Likewise, the rear lights feature one continuous “light pipe” across the width of the trunk that continues as the tops of the taillights.

The black cladding at the bottom of the Crown also employs the same visual trick that was used when the original Nissan 240Z needed to add headroom. Blacking out the bottom part of the car lets designers add height to the vehicle without drawing too much attention to that extra height.

The Crown’s large wheels and tires also help visually fill out the side of the car and raise the ride height and maintain the illusion that it’s just a big sedan. It comes with standard 19-inch wheels, with an optional upgrade to a 21-inch wheel, which is the largest offered by Toyota. The Crown is all about comfort, so the tires still have a sizeable sidewall on them—45 profile, even on the 21-inch wheels—and Hack says they even worked closely with tire manufacturers to develop a tire specifically for the Crown platform.

Comfort is also what Toyota’s full-size sedan buyers have come to expect, and it’s exactly what you’ll find inside. Acoustic glass on all the windows helps isolate you further from the noise outside. The interior has some of the softest seat cushions I’ve experienced—it’s like sitting on a cloud.

Horizontal lines across the dashboard—including the sleek button layout—also helped emphasize the width of the space, making the interior feel spacious even in the cars that weren’t equipped with the panoramic moonroof. Perhaps that’s for the best given that the rear headroom is particularly lacking on the cars with the moonroof, and taller buyers may want to skip that feature.

Of course, the Crown’s most unique feature is the one that defines a sedan: a fully enclosed trunk. Cargo covers may have improved a lot in recent years, but for sedan fans, there’s just no replacement for the security of a completely enclosed trunk with no windows over it to the outside world.

Thankfully, the Crown’s trunk is cavernous, with ample space for a family roadtrip’s worth of crap. According to Hack, it can fit three golf bags. There is a wider-than-normal shelf behind the rear seats’ headrests to compensate, but Toyota did a clever job of hiding this big rear cargo area under the fastback-like rear window of the car. Plus, it’s the only crossover-ish vehicle that I can think of with a fully enclosed trunk like this unless you’re in the market for a vintage AMC Eagle.

Hack wisely never name-checked old people in his comments as a perfectly diplomatic company representative, but it’s not hard to read between the lines when it comes to all the ingress and egress talk and the usual suspects who buy full-size Toyota sedans. Anyone old enough to remember the youth-oriented Scion xB becoming a surprise hit with the elderly knows that the ease of getting in and out of a car means a lot to older buyers.

Yet, it’s clear that Toyota does not want to completely cede full-size sedans to an aging audience nor does it want to give up a segment with loyal customers. The new lifted Toyota Crown is a big bet on trying something new to attract new buyers who would have never looked at a big Toyota sedan otherwise, and it’s got our attention accordingly.

The post Here’s Why the 2023 Toyota Crown Looks Like Nothing Else on Sale Today appeared first on The Drive.