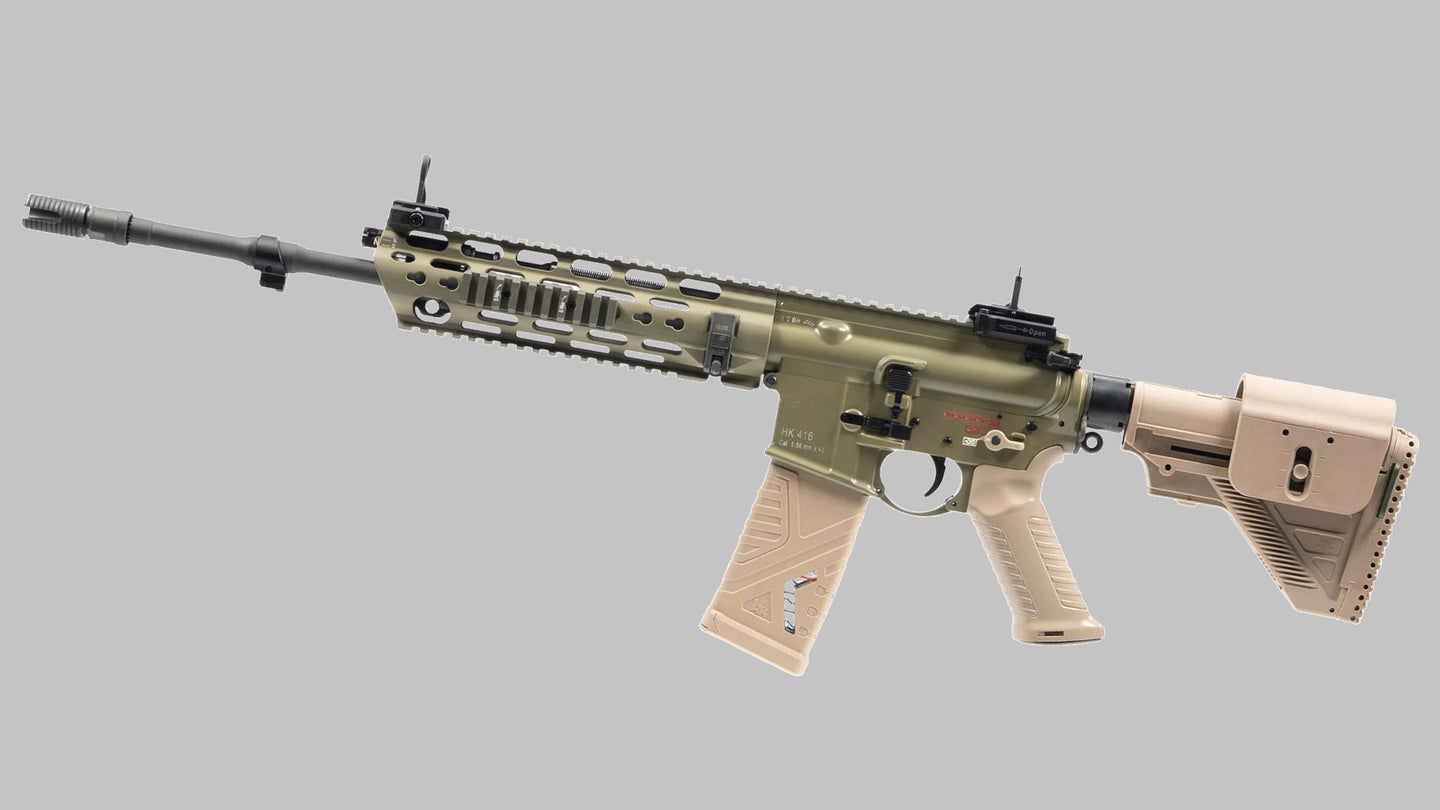 The German government has now taken an important step toward delivering a new standard service rifle to the country’s armed forces, or Bundeswehr. In 2024, Germany’s military now expects to begin replacing its existing G36 rifles with new HK416 A8s, both of which are produced by Heckler & Koch and are chambered to fire the NATO-standard 5.56x45mm round. This comes two years after legal issues forced the cancellation of a surprise initial contract award to underdog gunmaker C.G. Haenel.

The German Federal Ministry of Defense announced on December 14 that the Budget Committee of the country’s parliament, or Bundestag, had approved the initial funding of what is formally known as the Bundeswehr Assault Rifle System, or System Sturmgewehr Bundeswehr. Authorities in Germany say that they expect to purchase a total of 118,718 HK416 A8 rifles for a total cost of approximately 209 million Euros, or just under $222 million at the rate of exchange at the time of writing.

It is unclear whether or not this figure includes other ancillary items, such as spare parts, accessories, and support services. A separate report from the German outlet Soldat Und Technik in March said that Heckler & Koch was expected to receive a contract worth around 273.3 million euros (approximately $290 million at the current exchange rate).

The HK416 series is derived from the U.S.-designed AR-15/M16 pattern, but differs substantially from that parent design in its use of a physical gas piston rather than so-called direct impingement to cycle the action. Direct impingement uses propellant gas siphoned off from the barrel during firing and dumps it directly into the internal action of the gun. A gas piston system offers advantages when it comes to reliability since it does not blow that gas, and the particulate matter it generally carries, directly into the main action, where it can build up on various surfaces. Instead, it uses propellant gas and cycles the bolt via a mechanical piston system.

Since the introduction of the original variant in the early 2000s, the HK416 series has become extremely popular worldwide, including with U.S. special operations units and the U.S. Marine Corps. The gun received a major boost to its popularity and general recognition, including with the general public, after members of SEAL Team Six employed them on the raid that led to the death of Al Qaeda founder Osama Bin Laden in 2011.

The exact configuration of the Bundeswehr’s future HK416 A8 rifles is also unclear. Pictures that have previously emerged of A8 variants, including one that Germany’s Ministry of Defense released along with the announcement yesterday, show rifles with a handguard that is notably different from the standard offering on current generation HK416 rifles from Heckler and Koch that has both U.S. standard Picatinny accessory rails and attachment points that utilize Heckler & Koch’s proprietary HKey attachment system.

The handguard seen in the picture put out by the Ministry of Defense is similar to one that had been seen on the preceding HK416 A7 rifle in service with German special operations units. In German military service, the HK416 A7 has been designated the G95 and it has been reported that the new A8s will be designated the G95A1.

Soldat Und Techniks’ story in March said that the complete Bundeswehr Assault Rifle System would include versions with 16.5 and 14-inch barrels, with the latter designated the G95KA1. A picture showing the left side of the 16.5-inch sub-variant shows a latch on the outside of the rear of the handguard, suggesting it may be possible to rapidly remove the handguard and quickly swap out different barrels between guns. A requirement for interchangeable long and short-barrel versions of the selected gun was included in the original tender put out in 2017.

The German military’s preceding A7 rifles also had iron sights consisting of a quick-detach rear sight and a fixed flip-up front sight attached to the barrel, the latter component of which appears to have been eliminated on the A8. The Bundeswehr separately announced in October 2021 that the ELCAN SpecterDR, an 1-4x adjustable optical sight, would be standard on all of its new service rifles.

Beyond all this, the new A8 variant sports a bayonet lug on the barrel, has a different style of pistol grip compared to earlier variants, and has an adjustable cheek rest fitted to its sliding buttstock. It also shows it with the new style HK416 polymer magazines, which are already in German military use together with the G95.

Interestingly, the A8 has an ambidextrous fire selector lever configuration that is more akin to those found on many of Heckler & Koch’s other rifles like the G36 and the new HK433, as well as other company offerings such as the iconic MP5 submarine gun, than the ones typically found on AR-15/M16 variants and derivatives. This is a feature that appeared to have been first introduced on the A7.

No matter how the German military’s new HK416 A8s might be configured, the approval of funding to purchase them and the plan to start fielding them in 2024 marks important progress in the effort to finally replace the G36. First adopted by the German armed forces in the mid-1990s, the G36 has been beset by criticisms and reports of low user satisfaction for years now. The most notable of the reported problems have centered on decreased accuracy during extended use in hot weather environments or in instances where there is a rapid change in ambient temperature. Authorities in Germany have acknowledged the issue, but have insisted that no troops have ever been endangered as a result.

Since it was first announced in 2017, the replacement Bundeswehr Assault Rifle System effort has turned into something of a saga itself. The German Ministry of Defense’s announcement obliquely mentions this in saying that “the selection decision had already been made in spring 2021, but a review procedure against the decision by an unsuccessful bidder had delayed the conclusion of the contract.”

The unsuccessful bidder is another German gunmaker, C.G. Haenel, who was initially selected as the winner of the Bundeswehr Assault Rifle System tender in September 2020, which was seen as a surprise choice at the time. Haenel’s entrant was another AR-15/M16 derivative using a gas-piston operating system called the MK556, which you can read more about here.

However, German authorities canceled the contract with Haenel in October 2020 amid allegations that the MK556 and related designs infringed on Heckler and Koch patents. Officials in Germany then selected Heckler and Koch the following year, saying that the decision had been made based primarily on a revised analysis of the offerings and that Haenel’s proposal had been determined to be “economically inferior.” No direct mention appeared to be made of the patent issues. A German court dismissed a subsequent lawsuit from Haenel attempting to overturn the new decision in June.

Now, finally, the path seems clear for German troops to finally get new HK416 A8 service rifles starting in 2024.