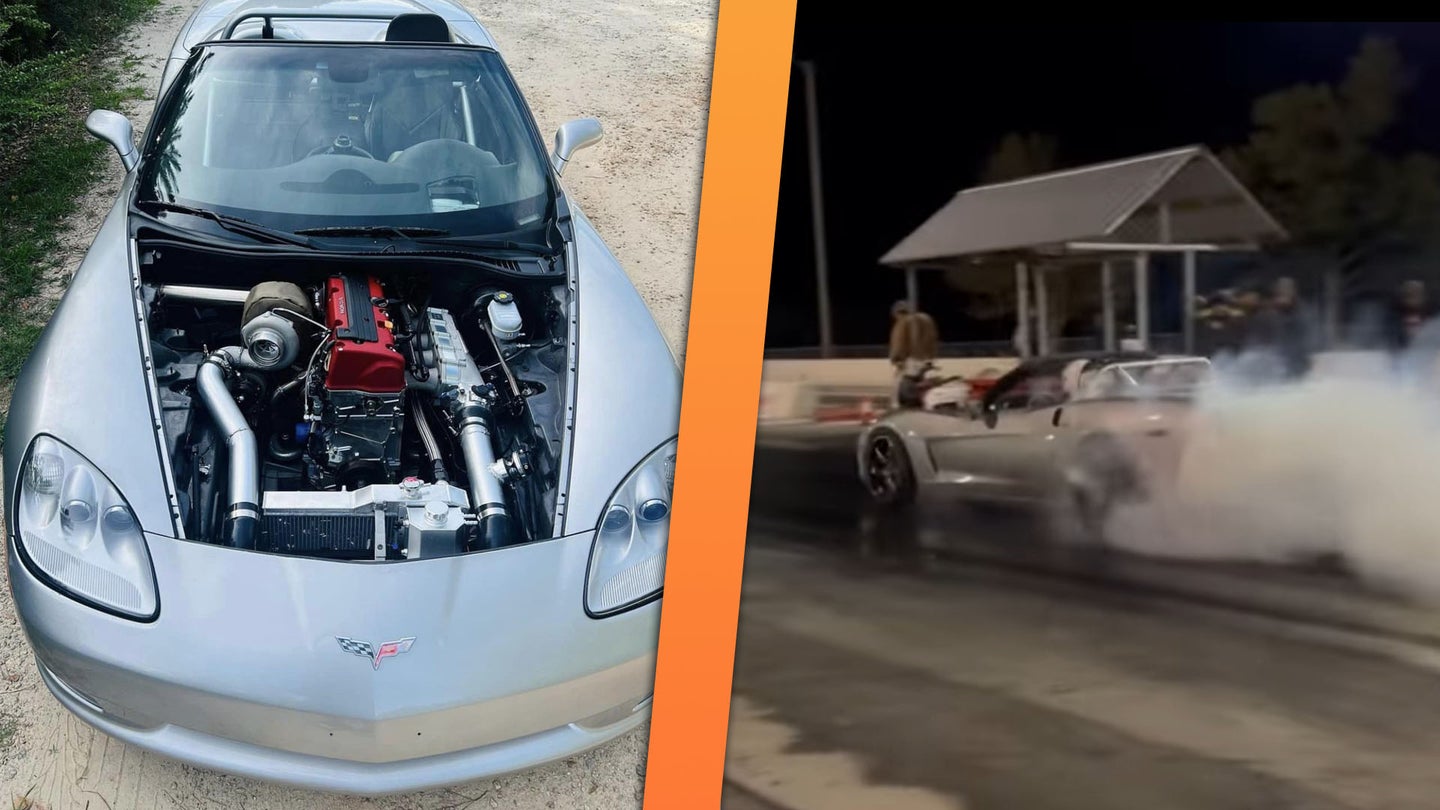 Remember way back in dinosaur times when we wrote about that C6 Chevy Corvette that lost its small-block Chevy and gained a turbocharged Honda K24? Well, long story short, it ran, had issues, broke, and now it’s being fixed. That might not seem like a huge deal, but hey, it’s a Corvette with about 900 horsepower Honda engine. Don’t you want to know more?

The car was built by Kevin Prescott and his friend Austin Brown. Together, they form Unruly Motorsports. Their main project, the K-swapped C6, embodies the first half of their moniker well. Power is sent through the two-speed Powerglide to an 8.8-inch Ford rear end. The K24 is fully built to take that power, too. Well, it was fully built. After a rush to the finish line at a local drag racing event, the car started in second gear, hooked up mid-track, and then jumped timing. “I guess I forgot to tighten the crank pulley bolt,” Prescott told me. He was rewarded with five bent valves, but the bottom end of the motor is still fine. “We were talking about swapping the head to a different [one] we had lying around anyway.”

Prescott promised dyno figures almost a year ago when the car was assembled, but time at a shop to determine a precise horsepower figure still hasn’t been sorted out. “The original motor with drivetrain loss, we were making 830 in a front wheel drive car with 26 pounds and a little bit smaller of a turbo. We did have a small dilemma with the boost controller on the track, and it actually hit 34 pounds of boost. “

“It was probably right at 900, maybe 890.” That’s not anything official, of course, but the man builds a lot of turbo K Series.

If you’re curious about what a mostly un-tuned K-swapped Corvette sounds like doing a burnout, that’s below. I thought it might seem strange to see a Corvette doing a burnout without a small-block Chevy soundtrack, but it isn’t. It is unusual to see V8-swapped Miatas attempting similar feats, though. Audio always seemed dubbed-in to me.

Prescott considers the Corvette’s first venture at the dragstrip mostly unsuccessful, but it was good to learn some things about the car. The shift arm on the transmission not actuating right was a good thing to know, for instance. The builder described the car taking off the line in second gear as being similar to a steam locomotive. Likewise, it’s good that the K24 skipped timing with the less-desirable head on it as opposed to the one the duo was planning to swap on anyway.

As is usual with projects like these, life gets in the way. Prescott says that everything should be ready after the holidays, though. In the meantime, a local airfield has been secured for the occasion to do some “testing.” The owner of the airstrip is an elderly woman, according to Prescott, who insisted that he “smoke out her field” doing burnouts in the car while she was around, or else they wouldn’t be allowed to use it. He assured her that he will happily oblige. We need more people like that in the world.