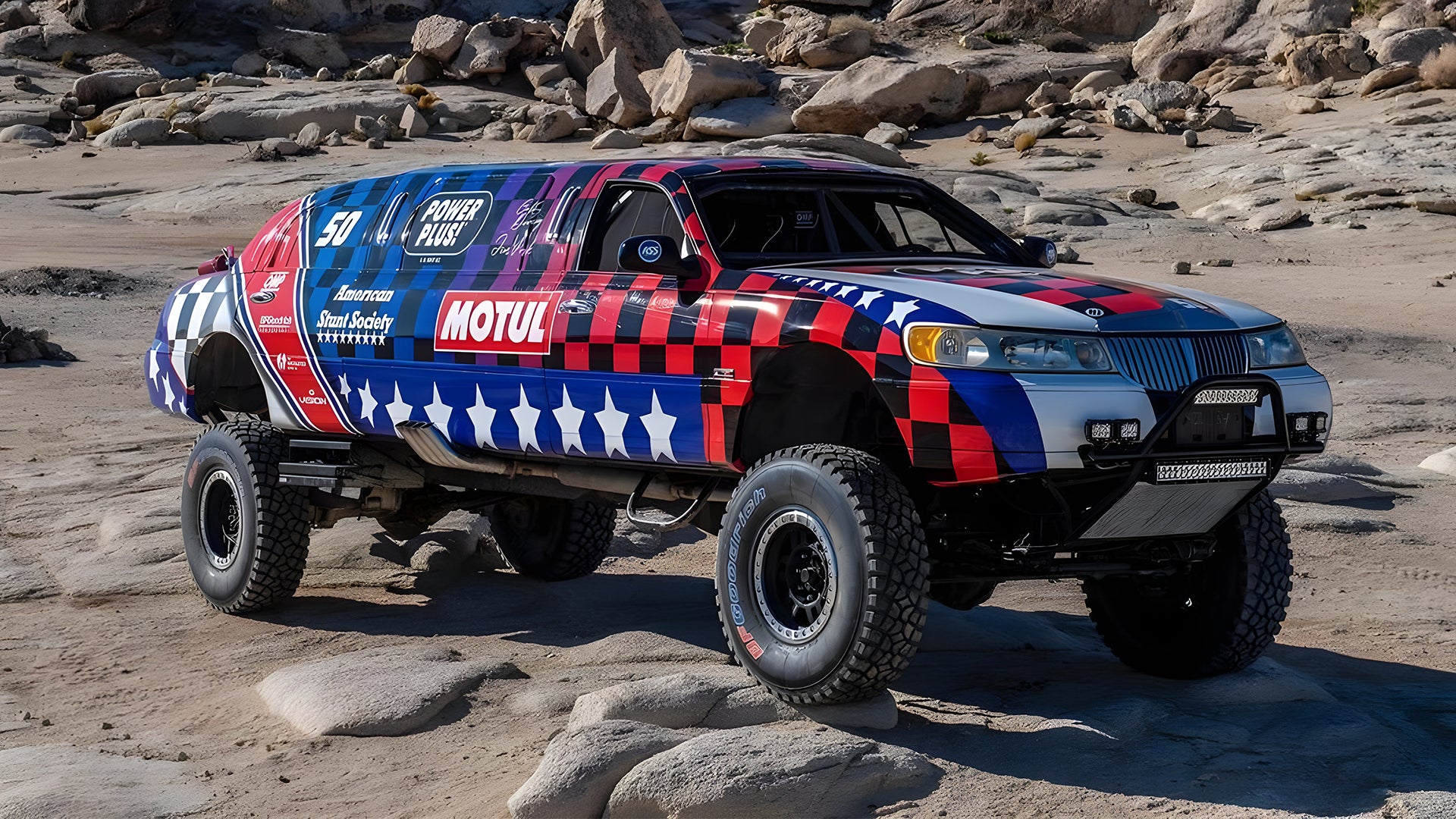 Jim York is undeniably the king of limos. Whether it be drifting, jumping, or off-road racing, you can find him parked in the front set of something with a stretched wheelbase.

Most recently, York and his co-captain Gabby Downing brought a decked-out Lincoln Town Car limo to Las Vegas where they competed in the Mint 400, the oldest active annual off-road desert race in the United States. After a brutal torture test in the Nevada sand, the limo crossed the finish line, meaning that York and Downing made history for piloting the very first limo to compete in and actually finish the Mint 400.

York’s self-proclaimed “horrible idea” was filled with complications. Within five miles of starting the race, the Lincoln’s radiator cracked, meaning that they were stopping every four miles or so afterward to fill the radiator with water—it used a total of 50 gallons over the duration of the race. Downing said that by the end, they had lost power steering, broke a leaf spring, and even bent the Lincoln’s axles. York also told me that the team blew a sidewall after hitting a canyon wall. Despite many pitfalls and reasons to quit, the duo pressed on to finish.

“I’ve always loved a really good horrible idea and this seemed the my best worst idea yet,” York told me. “It was something I heard couldn’t be done, and just like my limo world jump and world record limo hot tub jump, I love to prove people wrong!”

The car was built in just three weeks by HiRoad, a California-based fabrication shop. That meant transforming it from a cushy people hauler to a lifted and caged off-roader with gigantic BFGoodrich KDR2+ tires, mounted to 17-inch beadlock wheels.

Unfortunately, a full build sheet wasn’t made public at the time of writing, but it apparently retains quite a bit of factory components, including the original Ford 4.6-liter V8 and four-speed automatic transmission.

Believe it or not, this limo has not one, but two frames. York told me that the limo’s original frame was simply placed on top of an old Chevy one-ton frame and welded together. The limo’s transmission is mated to an Atlas transfer case to power the front and rear Dana 44 axles. It’s riding on a set of Rough Country shocks, plus the same bump stocks that York used when he did a world record hearse jump, and its original one-ton leaf springs.

The folks at HiRoad said that they scrambled to get the necessary parts and complete the build, working up until the day before the race. It still has the full bar, though, which is nice.

York recalled rolling up to a checkpoint and a staff member telling him that the limo had cost him a $10 bet. The staffer joked that he bet that the vehicle wouldn’t make it to their checkpoint, which served as a catalyst for both York and Downing to press on and finish the race. After they crossed the finish line, both drivers admitted to one another that they were considering calling it quits right before the unintentional words of encouragement from the staff. Well, that and the water that the jokester gave them to refill their cracked radiator.

“Both Gabby and I admitted that right before this time we both had the thought, ‘Maybe we just call it.’ Neither of us would admit that [until] after the race,” said York. “Then this guy betting against us meant there was still likely some for and against and we weren’t stopping until the limo just couldn’t move or we passed the finish line.”

As for where the limo placed, it doesn’t really matter to York and his co-driver. In actuality, they took first and last, and second and third too, because the limo was the only vehicle competing in the “Experimental/Supercar” class.

“Driving the limo up on the finishers stage [I was] exhausted, relieved, and just hyped as can be. I mean everyone starts to finish and we made the hope a reality,” York told me, recalling the memorable moment when they crossed the finish line. “I call it a huge win. No one thought it was possible and we were the first limo EVER to start and finish the Mint 400. No one can ever take that away!”