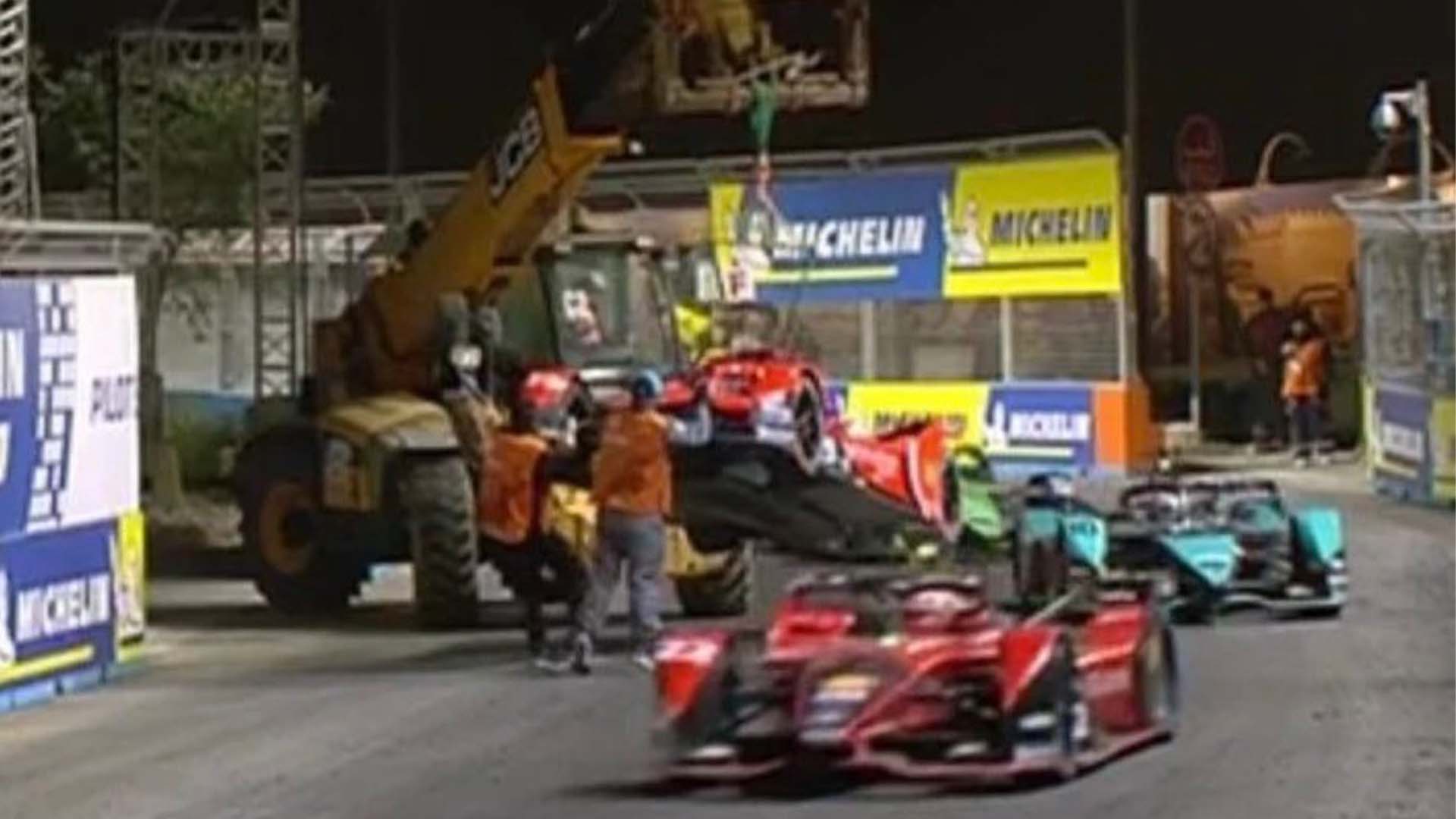 Formula E’s first two rounds of the 2022 championship just happened and honestly, they were a big success. The new, seemingly complicated qualifying format worked well and the races were exciting, close-paced affairs. It got dangerous during the last 12 minutes of the final race, though, as a safety car period saw cars being forced to stop suddenly on track, hitting each other. Then, they were passing extremely close, repeatedly, by a crane with a car dangling from it and marshals on track.

What happened was that Alex Sims’ Mahindra stopped on track, near turn seven, after hitting the walls. It’s not the best place to try and retrieve a car from but also not the worst; race direction knew there was a telehandler at turn five that could pick the car up and a way to take it off the track at turn 8. This being a Formula E street circuit, though, there wasn’t a large distance between the two. Race director Scot Elkins—a man extremely aware of the ire currently being aimed at poor race control decisions behind safety cars—thought it should have been an easy retrieval, telling me he expected it to take “four minutes.”

Maybe it should have but instead the telehandler got stuck across the track, forcing the safety car (and all 21 cars behind it) to come to a dead stop suddenly, around a blind corner. Cars crunched into each other, from the very front of the field to the back. Robin Frijns, running in second, said he was forced to collide with first-place Edoardo Mortara. “I just hit him and the only thing I hear behind me is carbon fiber cracking,” he explained to me afterward. “The crane was in the middle of the track and the safety car had to stop, but I think it was not really well communicated in a way.”

I asked Elkins why teams didn’t get a warning that there was a stationary obstruction on the track ahead and he told me, “I have cameras everywhere, so I see the telehandler stop myself. Once I saw it stop, obviously we started having conversations and trying to understand why and trying to get it going again and trying to get it out of the way. I think it’s obvious, the things that we’re trying to do. But we’re dealing with human beings, and we’re trying to convey messages to human beings and sometimes that’s not the easiest thing in the world. I think as we are all humans, we all know It’s difficult. “

The human factor is a crucial element of motorsport. What Elkins was referring to was the marshals, who are the unsung heroes of motorsport in every category—they’re unpaid volunteers who give up their time and expertise to make events happen. And for the first time, the SAMF (the Saudi Arabian motorsport authority) was running the show all by itself, rather than having help from the experienced Bahraini F1 marshals.

Cars clonking into each other on track would have been bad enough, if they hadn’t then had to drive past the telehandler and Sims’ car as it dangled across the circuit. FE tracks are very tight and going off-line, as Nissan driver Max Günther explained to me after the race, is risking a spin even at low speeds—or worse, a sudden puncture from debris. So drivers had to choose between getting uncomfortably close to an extremely dangerous vehicle or risking losing control of their cars and hitting it anyway.

The last F1 driver to die as a result of injuries sustained during a race was Jules Bianchi, whose Marussia car hit a retrieval vehicle during the 2014 Japanese Grand Prix. He was a close friend of several of the FE drivers, including Jean-Eric Vergne, who understandably wasn’t amused by what happened.

Elkins denied that it was unusually dangerous to have cars on track alongside the telehandler, telling me that’s how a recovery has to be on a street circuit. The only issue, he said, was miscommunication.

“That’s probably the one error—of not giving everybody a heads up that the safety car was slowing down, because it did back up a little bit and was a little bit discombobulated,” he added.