How The New Hypersonic Weapons Tracking Constellation Will Work 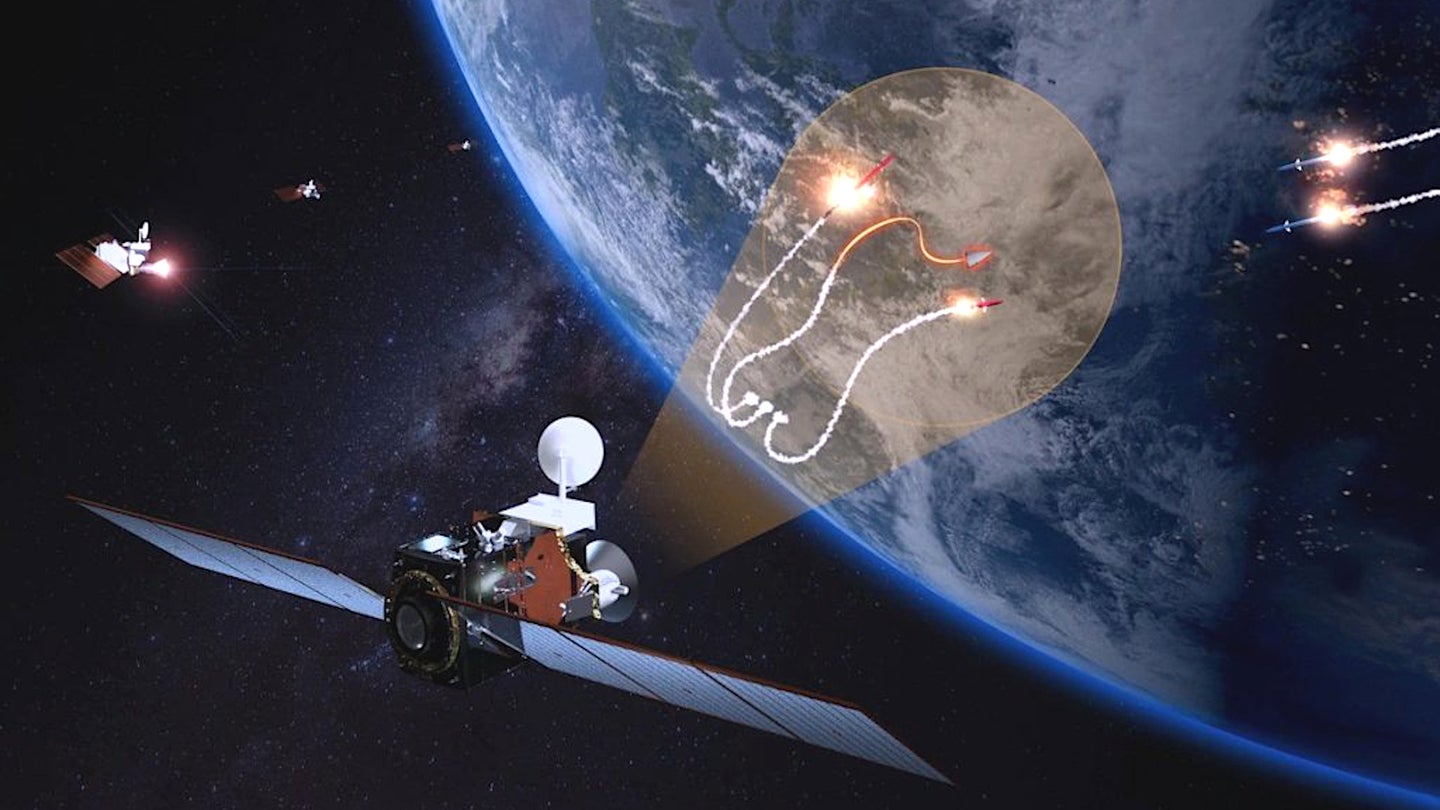 The U.S. Space Development Agency, or SDA, announced on Monday that it was awarding more than $1.3 billion in two prototype agreements to send 28 small satellites into low Earth orbit. Scheduled for launch in three years, the satellites are designed to provide the initial missile warning/missile tracking capabilities of the future National Defense Space Architecture, or NDSA.

The NDSA consists of mulitple components, including two layers of space-based platforms, which the SDA describes as the Transport Layer and the Tracking Layer.

The Tracking Layer will provide global indications, warning, tracking, and targeting of advanced missile threats, including hypersonic missile systems. This capability encompasses space-based sensing, as well as algorithms, novel processing schemes, data fusion across sensors and orbital regimes, and tactical data products able to be delivered to the appropriate user.

The Tranche 1 Tracking Layer contracts were awarded to L3Harris Technologies, Inc. of Melbourne, Florida, and Northrop Grumman Strategic Space Systems of Redondo Beach, California. The value of the L3Harris contract is about $700 million, while the Northrop Grumman contract is valued at about $617 million.

Each contractor will build 14 satellites with a wide field of view (WFOV) overhead persistent infrared (OPIR) sensor that will become part of what SDA calls Tranche 1 of the Tracking Layer of its planned overarching early warning constellation.

The 28 satellites will be placed in low Earth orbit (LEO; about 1,000 kilometers or 621 miles up from the Earth’s surface) in four different launches of seven a piece that will begin in April 2025, SDA director Derek Tournear told reporters Monday afternoon.

“The primary purpose of this contract is so that we can provide…a missile warning/tracking capability for the advanced missile threats and deliver that as rapidly as possible,” he said.

Each satellite will be placed in a polar orbit, he said, meaning they will traverse the globe from north to south. But they will be in four different planes, or locations across the globe. That’s why it will take four launches to deliver them, Tournear said.

The Tranche 1 Tracking Layer satellites will be flown out of SDA’s Operations and Integration Centers at the U.S. Air Force’s Grand Forks Air Force Base in North Dakota, and the U.S. Army’s Redstone Arsenal in Alabama.

That these capabilities are on the near horizon shows how quickly the U.S. military has made a course correction on its space-based missile defense and warning strategy. Just four years ago, now-retired General John Hyten – head honcho at U.S. Strategic Command at the time – said it was critical to modernize the Pentagon’s space-based sensing capabilities to deal with emerging threats. This was especially critical when it comes to being able to track objects traveling unpredictability at very high speeds in the upper atmosphere or even space, after their initial boost phase had ended. This tracking layer, which includes mid-course following, would need to be resilient and capable of detecting and tracking hypersonic threats throughout their flight envelope.

This latest SDA award, for part of the NDSA layered-array satellite warning and tracking system, comes at a time of growing concern about the threat of hypersonic weapons that can elude legacy U.S. satellite systems and even radars. Those threats were highlighted last year when China tested an apparent nuclear-capable hypersonic glide vehicle that goes into space and travels in an orbital-like fashion before making its run through the atmosphere toward its target.

As an indication of just how seriously the U.S. is taking the missile threat from China, Congress provided SDA $550 million in additional funding in Fiscal Year 2022 to accelerate deployment of the Tracking Layer, with specific direction to demonstrate a space-based missile warning, tracking, and targeting capability in support of U.S. Indo-Pacific Command, the Pentagon said. But the plan is to expand that program globally.

“The vision for the NDSA includes fielding a system that provides a resilient global capability to all combatant commands as rapidly and affordably as possible,” according to the Pentagon’s media release about Monday’s contract award announcement.

The contracts awarded to L3Harris and Northrop Grumman are part of a $2.5 billion Tranche 1 Tracking Program budget, Tournear said. In addition to paying for the satellites themselves, that figure includes money to pay for the launches, plus a $325 million contract awarded in May to General Dynamics Mission Systems and Iridium to establish the ground Operations and Integration (O&I) segment for the Tranche 1 Tracking Layer. Those companies will build ground entry points and operations centers for the NDSA, as well as provide network operations and systems integration services for the SDA’s next tranche of distributed low-earth orbit satellites.

The core operations and integration functions include enterprise management, network management, mission management, payload data management, and constellation monitoring that spans the ground, link, space, and user segments of the architecture, according to General Dynamics.

The idea is that the Tracking Layer will be more responsive, flexible, and resilient to the ever-more real prospect of an enemy anti-satellite attack by using this large, distributed constellation of small satellites.

It will be a follow-on to the Tranche 0 Tracking Layer of eight satellites, which begin launching in September with two and another six the following March, said Tournear. You can read more about that here.

“Those will really be able to demonstrate the capability of this wide field of view missile warning/missile tracking from space,” he said.

The U.S. military’s current space-based early warning capability comes from a relatively limited number of larger satellites, such as the Space-Based Infrared System (SBIRS) constellation, which you can read about in more detail here.

SBIRS notably provided an advance alert that Iranian ballistic missiles were headed toward bases hosting U.S. troops in Iraq in January of 2020, giving those individuals time to seek cover.

SBIRS’ sensors are also known to be powerful enough to spot infrared events that are much smaller than a ballistic missile blasting off, such as the launch of smaller missiles, large explosions, and even artillery fire.

But hypersonic weapons – which reach speeds exceeding Mach 5 and independently maneuver after the rocket portion of the weapon burns off – are much more difficult to track.

And there are more threats of many kinds to satellites now than when the legacy systems like SBIRS first launched years ago.

Last year, U.S. Space Force’s General David Thompson, the service’s second in command, said that Russia and China are launching “reversible attacks,” such as electronic warfare jamming, temporarily blinding optics with lasers, and cyber attacks, on U.S. satellites “every single day.” He also disclosed that a small Russian satellite used to conduct an on-orbit anti-satellite weapon test back in 2019 had first gotten so close to an American one that there were concerns an actual attack was imminent.

The NDSA is designed to adapt to these new threats by creating a constellation of hundreds of smaller satellites that will make it harder to blind the U.S. in space by distributing the network’s capabilities instead of concentrating it on just a few space-based assets. By creating a mesh network in which the constellation satellites communicate directly with each other and around the entire globe, the loss of any units can be adapted for on the fly. Starlink, already a favorite of the U.S. military, has blazed a trail in this regard, and future U.S. satellite capabilities will increasingly be based around similarly dense ‘constellations’ instead of a handful of just a few orbital platforms.

“The environment in space has changed,” Tournear noted Monday.

As a result, those “historical architectures were based on satellites that were [$10 billion or more], would take 10 to 15 years to develop and they would operate for 15 or more years.”

The first is the threat against satellites and the second is the threat posed by harder-to-detect paths of more modern missile systems.

“Now we’re in an environment where space is challenged. So because of that, we had to completely change the way that we do our space architecture.”

That architecture is now designed “to be more resilient based on proliferation,” Tournear said.

That means having “hundreds of satellites proliferated in low Earth orbit…flying to be able to provide these kinds of missions.”

In addition, there will be a second set of satellites flying in medium Earth orbit (MEO) at around 10,000 to 20,000 kilometers “to provide a more resilient backup for the missile warning/missile tracking. So essentially, if you want to take out both capabilities, you have to take out LEO and MEO.”

The nature of the threat to ground targets from missile systems has evolved as well.

“Everyone used ballistic missiles to launch, which means that I would put a warhead on top of a very big rocket. I would light that rocket up. It would make a very bright flash, and I could see its trajectory very early on, and then I could use physics…to predict exactly where that missile was going to land. And that worked for many decades.”

Not so much anymore.

Currently, the U.S. has “limited capability to do that tracking aspect” because “most everything is designed around doing what we call missile warning, which is initial launch.”

But the satellites in the Tranche 1 Tracking Layer are designed to change that.

“The satellites that we’re going to be launching and fielding can do that complete missile warning and missile tracking around the globe for as many missiles as could be launched against us,” said Tournear.  “So we will not only be able to do the old-school mission of missile warning – detect the launch and predict the impact point – but we’ll be able to detect it as it’s maneuvering and changing its impact point and be able to send that down and be able to tell an interceptor exactly where that missile is headed.”

These new capabilities are “important” said Tournear, “because as you see in the news, our adversaries – primarily Russia and China – have been developing and testing hypersonic glide vehicles.”

The SDA in February announced the awards of three prototype agreements worth approximately $1.8 billion to establish the foundation for the Tranche 1 Transport Layer, which will be a mesh network of 126 optically-interconnected space vehicles “that will provide a resilient, low-latency, high-volume data transport communication system,” according to the Pentagon.

Those will be ready for launch starting in September 2024.

Tournear used the example of last year’s Chinese hypersonic missile launch to show how the two layers will “work in tandem” from detection “all the way through to what [information] the warfighter gets.”

As the hypersonic glide vehicle begins maneuvering after detaching from the booster rocket, it starts to heat up in the atmosphere.

“Once that happens, our tracking satellites can see it instantaneously,” said Tournear.

The tracking satellites will begin to calculate a two-dimensional track of where that missile is headed and continually update it.

“And that means that now I can form a three-dimensional track” which “is important because that could actually be used to send to an interceptor to be able to take out that hypersonic maneuvering vehicle.”

But in addition to that interception piece, there are troops on the ground who need information about where the hypersonic weapon might land.

“Once those data get to the transport layer, whether that’s a two-dimensional track or a three-dimensional track, once several of these tracks from different satellites are merged together, I can send those data directly down via Link 16, which is an existing tactical data link that exists on a lot of our DoD platforms. It also exists on handheld types of radios.”

Thus that information can be “sent down directly into theater so that individuals can know whether they need to take cover or whether they can engage other radar or weapon systems to intercept the hypersonic maneuvering vehicle.”

This system is still a long way from being fully operational. It will require hundreds of satellites delivered over many years. But we are seeing the first steps toward that ambitious goal now.

The post How The New Hypersonic Weapons Tracking Constellation Will Work appeared first on The Drive.