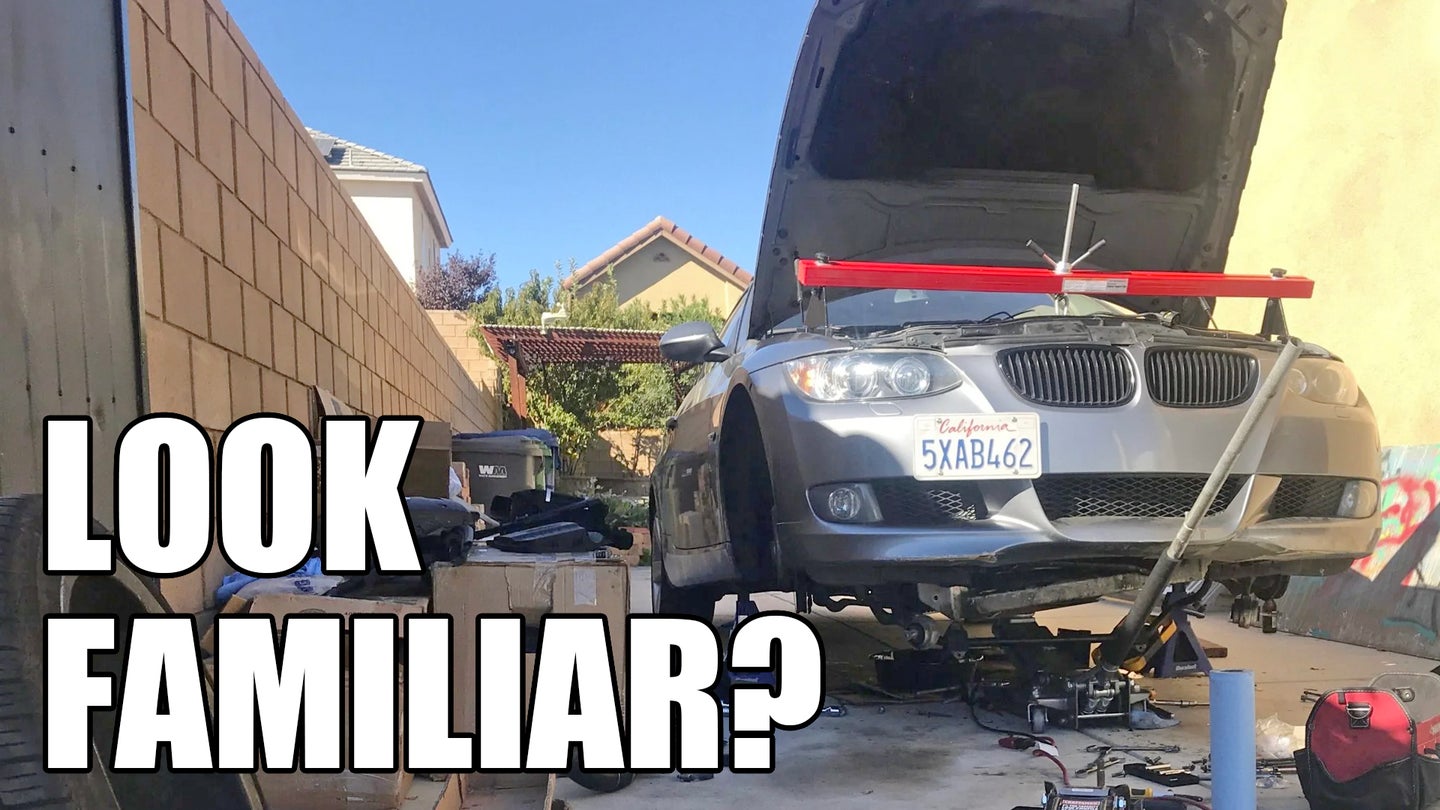 I remember the shock, the screams, the pitchforks. It was 2007 and BMW just unveiled its first turbocharged car ever, the N54-powered 335i. Local villages were being barbecued while BMW fans screamed about turbo lag and the impurity of having exhaust-driven turbines. These days, that same car and engine is coveted for its strength and power potential in a world of tiny turbocharged engines. But it’s also criticized for being a money pit. Fortunately, while diehards were crying about turbos, other fanatics embraced the change and used those  15 years to figure out how to make these cars reliable … mostly.

A quick list of BMWs you’ll find the N54 inline-six engine in:

OK, I might be exaggerating a bit about that initial reaction. But the long-term reliability of those early turbo BMWs has been poor. The common issues are aplenty. There is an oil leak that causes belts to slip, which causes the front main seal to fail, which clogs the oil pickup with rubber, thereby starving the engine of oil and blowing the engine. The cutting-edge piezoelectric fuel injectors (meant for European models that lean-burn, not for us in the U.S.) have a tendency to stop injecting fuel, as does the high-pressure fuel pump. Valve covers crack and leak. The twin Mitsubishi TD03 turbos explode with regularity, and the wastegates rattle.

I wish I could say those were all the problems that plague these models, but the truth is that the N54 is a deeply flawed engine. It was only just recently that the aftermarket has finally caught up and addressed most of its major problems. Calling it “reliable” now might still be a stretch, but I can say I would attempt to own one again with these parts. Let’s dig in.

Turbocharger failures and BMW N54 may as well be synonymous. The turbos themselves can last quite a while, but it seems that nearly every N54 with stock units has an annoying wastegate rattle. Usually, the rattle precludes the doom of the center housing rotating assembly (CHRA), but it can be fixed on its own thanks to Vargas Turbo Technologies (VTT).

It is an involved fix that does include removing the turbos, an endeavor that requires the removal of the front subframe. But it is a good option to use VTT’s wastegate repair kit if the turbos are kosher. It consists of a new wastegate flap, arm, and press-in bushing that eliminates the rattle permanently.

If it were me going through the effort of removing the turbos, I’d save up a bit longer and get totally fresh turbos to save myself any future trouble. The problematic stock turbos can be easily replaced by an array of aftermarket upgraded twin turbos that mount like the factory parts or totally replaced by a more efficient single turbo. It all depends on emissions requirements in the state where the car is registered. For myself in California, stock-looking twin turbos can help me get by.

A single turbo kit would be the ideal thing to do, but it would make the car instantly illegal in several states. It’s simpler, better at making power, and is much more reliable. The catch is that a decent setup will cost north of $7,000. That makes a $2,000 set of upgraded twin turbos seem like a bargain. A variety of companies make drop-in kits, like Pure Turbos, CTS, and VTT. My choice would be the VTT kit that has the wastegate fix pre-installed and has power-adding upgrades, all for roughly $1,000.

These engines might be the most leak-prone of anything post-’00. No, seriously. The undoing of any N54 will be the fact that it leaks oil relentlessly. The only way to fix that is a laundry list of gaskets, all at once. Without new gaskets, you risk blowing the motor by the aforementioned belt slip issue and/or a severely stained parking space. Then there is the issue of the explosion-prone water pump and electronic thermostat.

The factory gaskets that succumb to the heat are the oil pan gasket, oil cooler gasket, oil filter housing gasket, front main seal, and valve cover gasket. FCP Euro has handy kits for these jobs (oil filter housing and oil cooler, oil pan) and offers a lifetime warranty. Doing the oil pan gasket requires the removal of the front subframe much like the turbos and like a potential water pump job. In fact, most of the regular repairs that occur to an N54-powered car require a subframe removal, so it turns into one serious while-you’re-in-there situation.

Usually, the only reason the front main seal fails is because of oil-saturated drive belts slipping off of the pulleys and cutting it. VTT has also made a solution to prevent that with a shield for the front main seal that prevents catastrophic failure when (not if) oil leaks onto the belt. As for the valve cover, those can be problematic with cracks that cause oil leaks instead of the gasket itself. VTT also has a solution for this in the form of an aluminum valve cover and re-engineered gasket set for around $700. The factory BMW plastic valve cover is $529.

For the final round of stage zero mods, a new water pump and thermostat kit will cause an additional $689 to disappear from your bank ledger. It’s expensive but it prevents a headache in the long term, especially on an engine-critical component.

While certainly not the last weakness of the N54, fueling is the last of the major ones to address before I could have the confidence to road trip the car. The primary issues are the fuel injectors and the high-pressure fuel pump. Both were infamous issues at the very start of production and can still chase owners to this day. Several revisions were offered throughout the years on the injectors and fuel pump, and I think BMW has finally arrived at something resembling stable.

The latest Index 12 fuel injectors have largely eliminated the issues of the earlier versions, which started at Index 0. Sure, there are exceptions that have somehow lasted since 2007. I would try to get the maximum out of whatever is installed on the car due to the astronomical cost of a new set of injectors. Brace yourself. $3,514.

It’s easy enough to tell if the injectors are going bad. If the car runs poorly on a cold start with slight stutters or misfires, it’s likely that an injector is bad or that the car needs a carbon cleaning. Still, this is easily the most expensive repair in terms of parts cost for most N54s. The more likely failure is the high-pressure fuel pump, which usually soft-fails with a long crank problem before it just doesn’t start at all. That will cost $571 for a replacement part from the supplier that works as well as a genuine part. It’s also a fairly simple job to replace it.

Truthfully, the rabbit hole of owning this engine goes much deeper. But this should prime anyone looking into owning an N54-powered BMW. Most of the major issues are covered here but expect to find small problems and gremlins. After all, it’s a decade-old BMW engine. The final tally brings me to my knees: $7,500ish. That’s if I chose to do upgraded turbos and replace the fuel injectors. Over three-quarters of that can be saved if it’s just the VTT wastegate kit and not getting new injectors.

It’s been about four years since I owned my 2007 BMW 335i. Companies like VTT had not yet figured out a lot of the solutions we have now, but these new developments make me want one again. With the mass tuner adoption of the latest BMWs, it seems like there is hope in owning those machines, even if the cost to make them vaguely resemble a reliable car is high. Sure, plenty of modern cars offer what these old Bimmers do on paper, but if tinkering is your thing, these middle-aged birds offer something great for not a lot of initial money but are costly to modify. At the end of the journey, you do at least get a powerful luxury coupe that drives great and has a ridiculous stereo.

The post How To Make BMW’s Notorious N54 Engine More Reliable appeared first on The Drive.