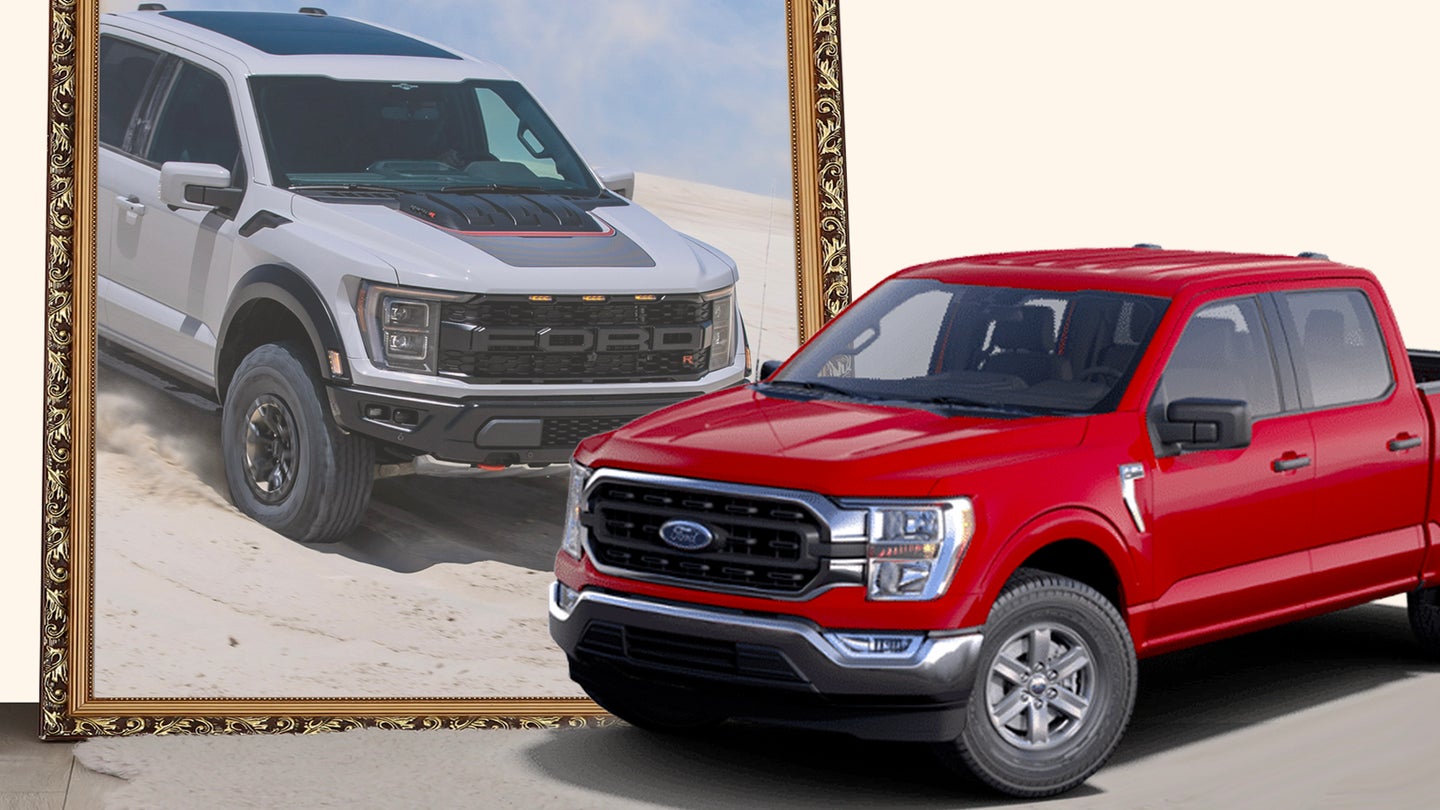 Earlier this week, the new V8-powered Ford Raptor R debuted with a claimed 700 horsepower and a price of $109,145. That’s a hefty amount of scratch, and that’s not including the tens of thousands in markups that will inevitably get Sharpie’d onto window stickers. But then again, it’s a hefty piece of hardware—the engine output seems like enough to slow the Earth’s rotation when pointed due east, and the truck weighs in at 5,950 pounds. With a price so high and such a tunable engine, it begs the question: Could one make their own 2022 F-150-based V8 monster for less money?

As I originally wrote about for our sister publication Car Bibles last fall, it’s possible to buy a gigantic Whipple supercharger direct from Ford Performance—warranty and all—and have your local Ford dealer plop it on top of any current Coyote-V8-powered Ford F-150. This investment ain’t cheap, it was reported to cost $7,350 for the supercharger kit and $3,000 for labor last year but it looks like the retail price on the supercharger alone is $9,500 now. But, considering you could toss it onto a V8 F-150 4X4 with a locking rear differential that costs $41,085 after destination, you’re still well below six figures on the truck. This combo is good for a claimed 700 horsepower and 590 lb-ft of torque, which is less torque than the R (with 640 lb-ft), but a shorter 3.73 axle ratio (as opposed to a standard 3.31) on the Ford build sheet might help make up for that in terms of acceleration.

At first, this isn’t an apples-to-apples comparison because the Raptor R has immense off-road chops in addition to making all that ice-cap-melting power. However, because the lowly base F-150 4X4 with a big supercharger costs so much less money, could you dig into the glorious aftermarket and still make your own Raptor R for less than what Ford is asking? Let’s discuss.

A good chunk of the Raptor’s and Raptor R’s energy is rooted in being able to roll over anything. Getting airborne, riding comfortably over washboard surfaces in the desert at high speed, digging through deep sand, shrugging off rocks and ruts—everything that makes them street-legal Baja racers.

There are a bunch of options for raising a plain F-150, like these kits from Eibach, Fox, and many other manufacturers.

As far as wheel and tire packages go, there is no shortage of 35 to 37-inch tires to match the Raptor R’s mighty meats, or any flavor of off-road-ready wheel to tickle your subjective-styling fancy. Once again, Ford’s catalog has some neat stuff for sale. Personally, I think a sturdy set of off-road-ready steelies would look so cool. To ensure that rocks and boulders are but a scratch for any off-road scenario, several companies make underbody armoring as well as steel bumpers, some of which come in convenient kits.

We don’t need to talk more about bumping power, since the previously discussed supercharger adds plenty to our hypothetical outlaw Raptor R build here. For good measure and theatrics, any Raptor R impersonator would need a good exhaust system. But more importantly, anything that’s taking on this Baja blaster needs to stay cool and composed in the hot desert heat.

The number one way to bleed off heat is by installing an upgraded radiator, but it’s also important to keep an eye on oil and automatic transmission fluid temperatures, too. Thus, bolting up an upgraded oil cooler and matching transmission cooler is a good idea.

I already mentioned suspension tuning, but one upgrade that’s split between suspension and cooling is the reservoir (or, “resi”) shock absorber. The addition of a reservoir increases shock fluid capacity, which helps the shock stay cooler for longer, as shocks get hot during repeated high-speed compression and rebound.

Here’s a rough build sheet of what one could cobble together from all of the above sources to mimic the mighty Raptor R:

Of course, installing all that stuff isn’t trivial. And the grand total would end up being higher with tax and shipping and whatnot. But think of how much satisfaction you’ll get thrashing around in a truck that you dialed in yourself! Or even if you pay somebody to slap that stuff in—you’re still going to be in for less than a Raptor R’s list, and way less than what they’ll actually be selling for in the next year or two.

It’s fun to dream up less-expensive aftermarket-built interpretations of what automakers offer from the factory. Imagine being given a budget of $25,000 for baller aftermarket parts and seeing what one could cobble together from a supercharged 2022 F-150 4X4.

And we didn’t even talk about one of the biggest bonuses to going this aftermarket route over buying a factory Raptor—you could make your own F-150 monster as a long-bed single cab!

There’s more to the Raptor R than just a lifted F-150 with a bunch of power, upgraded cooling, and some armor. But I bet the budget version would still come fairly close. At a minimum, it would still be a blast to thrash around in. And if we come to find out that dealer markups are sending R prices into the stratosphere, all the more inclination to get a bit creative.

The post How to Turn Your V8 Ford F-150 Into a Budget Raptor R appeared first on The Drive.