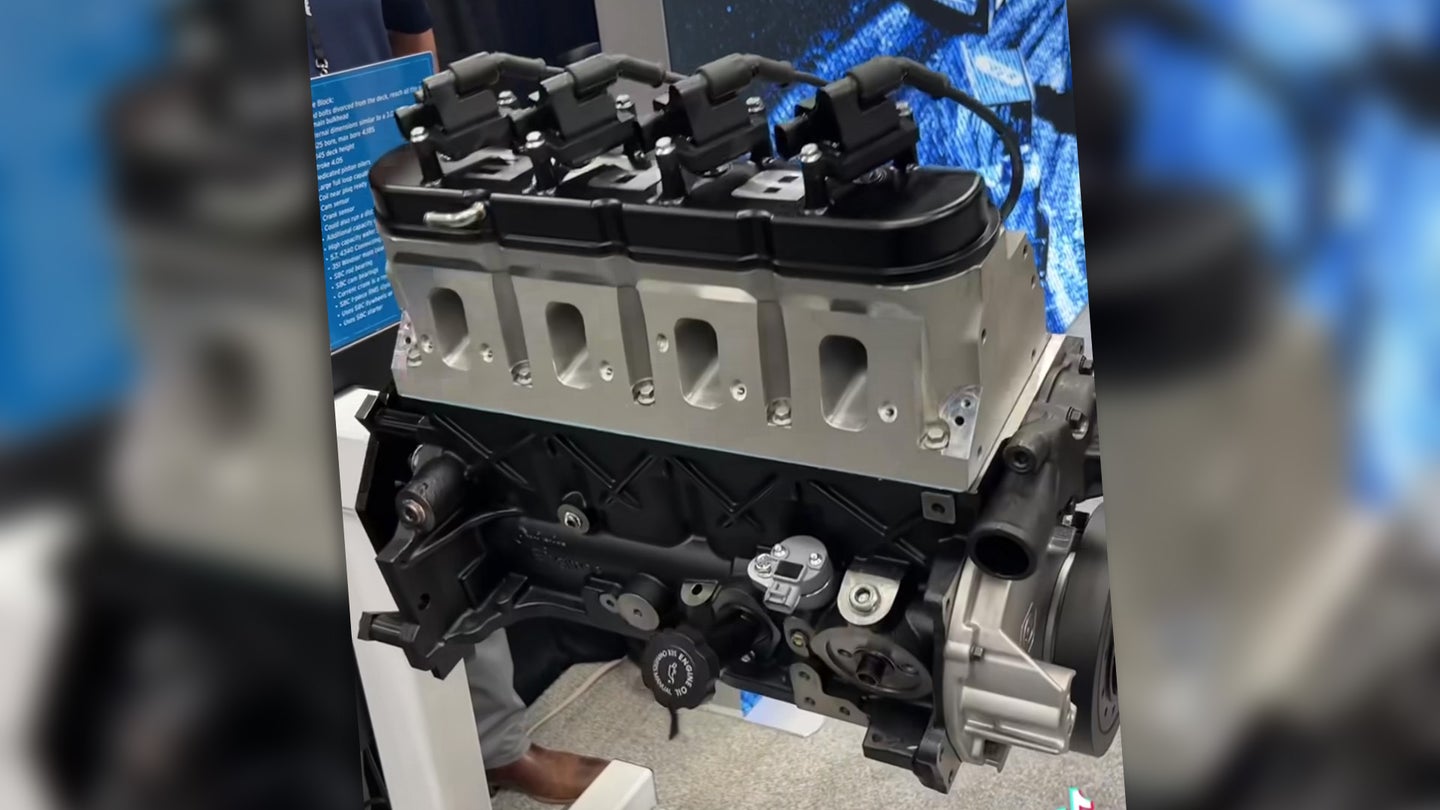 Many classic four-cylinder cars have so little performance potential that owners give up and swap their engines out for V8s. They may soon have an appropriate four-banger performance option, though, as a 3.6-liter turbo four-cylinder has just debuted at the Performance Racing Industry show. It’s only a concept for now, but its creator is hearing so much demand that it’s making a list of potential customers.

Shown off by crate engine manufacturer Blueprint Engines, this enormous four-banger is supposedly capable of making 340 horsepower and a whole 500 pound-feet of torque with a modestly sized turbo. By comparison, the next-closest engine in a production vehicle—the Chevy Silverado’s turbo 2.7L—produces 310 hp and 430 lb-ft. It makes a whole 35 lb-ft more than the 6.2-liter V8 in the C8 Chevy Corvette, with only half as many cylinders and just over half the displacement.

While Blueprint’s social media describes this engine as being based on an LS V8, a call to the company revealed that’s not quite the case. It only uses cylinder heads from the LS, as it’s actually an adaption of an industrial engine produced by Blueprint’s commercial division, Origin Engines. That version of the lump uses heads from Ford’s 302 V8. One of its main uses is in Kohler generators, which is why it makes so much power at low revs—1,800 rpm according to the Blueprint rep I talked to.

That’d also probably be a continuous power rating, not peak, indicating max power may be significantly higher. On top of that, that’s with a camshaft tuned for generator use; a car-oriented cam could offer a broader power band and increased peak power.

Before you get excited to buy one of these for your hot rod project, you should know that Blueprint only considers this a concept engine at present. The motor displayed at the PRI show isn’t a runner, and no working version has been engineered. But Blueprint also says the feedback it has gotten proves there’s a market for this engine.

A representative told me they’ve received 30 calls about it since the power plant’s reveal, while Blueprint’s social media says people have shared tons of ideas for how they’d use one—in pontoon boats, midget race cars, Chevy S10s, classic Jeeps, and so on. It’d also be ideal for old sports cars with huge four-cylinders, like the Mitsubishi Starion with its 2.6-liter, or the Porsche 944, which got as big as 3.0 liters.

There’s no guarantee this engine will ever be made and sold, but Blueprint made clear that people are interested. If you are, it wouldn’t hurt to ring ’em up and make sure they know you want one too.

The post Huge 3.6L Four-Cylinder Claims 500 LB-FT With LS Head and a Turbo appeared first on The Drive.