I Fixed My Nissan Z With Hardware Store Plumbing and My 3,000-Mile Road Trip Is Underway 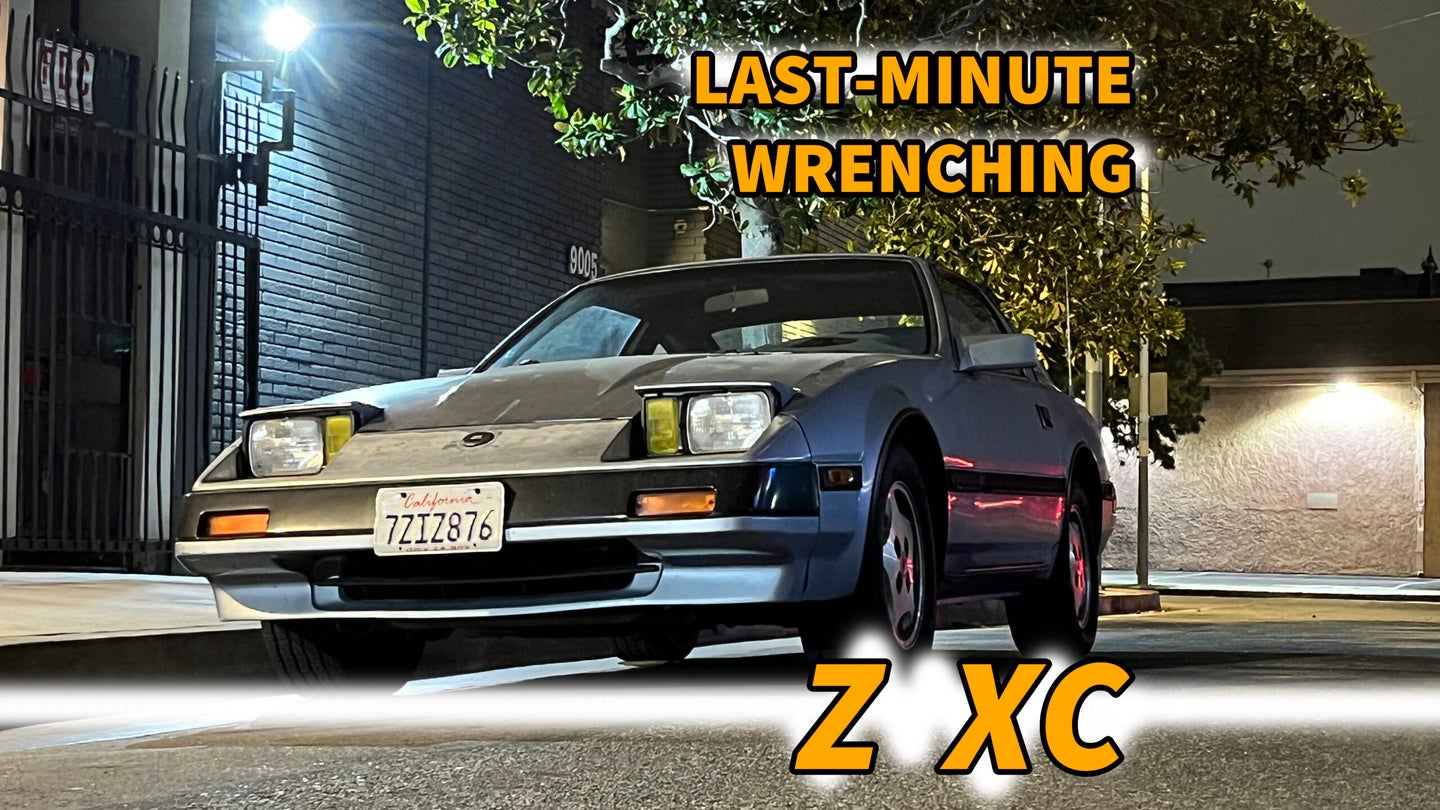 Prepping my 1984 Nissan 300ZX to drive from Los Angeles to New York’s Hudson Valley (with a few off-route stops in between) has been mercifully straightforward. The only repair that required real creativity was fixing a cracked intake hose. A proper part proved impossible to find on short notice, but I was able to improvise with rubber tubing made for toilets.

More backstory: meet the Z I restored, abandoned, restored again, and am now driving across the United States.

I did a major mechanical restoration on this car over the last few years, but many months of sitting in the sun caused a minor relapse into dilapidation. So this week’s road-trip prep included a new battery, air filter, fuel filter, a cig lighter fuse, air conditioning recharge, and an oil change. That’s a pretty painless punch list for such an old car.

Over a few hundred shakedown miles the coolant temp has seemed fine, and the VG engine isn’t leaking a drop of oil. But the car had a huge dearth of power and couldn’t hold a steady idle. The culprit was quickly identified as a huge hole in the intake line between the MAF and throttle body that I mentioned in a previous post.

Luckily, the torn hose was fairly small and readily accessible. First, I grabbed some flexible sealing tape. That, theoretically, would be enough to close the gash but I was hoping to not have to use it. “Surely,” I said to myself, “I can get a short piece of rubber or silicone hosing here in Los Angeles; the world’s capital of car love.”

The regular auto parts stores had couplers that were the right diameter, but not quite the length I needed. I even tried an old-school speed shop (yeah, we’ve still got a few in LA) and they suggested a turbo specialty shop but it was far away. So I begrudgingly logged into Amazon and ordered myself eight inches of universal silicone hose in a three-inch diameter that was supposed to be in my mailbox the next day.

When it arrived, I yoinked the old hose out (confirming that, holy crap, that thing was roached) and tried to fit the new one … only to realize it was too small. Though I made my best effort at squeezing it over the lips of the hard pipe, silicone is not as easily re-shaped as soft rubber (one of its advantages, when it’s sized correctly) and it just wasn’t happening. I had to give up.

Closer examination revealed that the Amazon hose was actually three inches in outer diameter. But of course, I needed one that was three inches inside. What the hell is up with that? The inner diameter determines the airflow—that’s the measurement that matters! Why would anyone order a hose based on its outer diameter?

I guess if we’re being honest here, it’s possible I misread the product listing. But regardless, the one I’d aquired wasn’t going to work once I’d seen just how gnarly my old hose was, I really didn’t want to tape it up and re-use it.

I made another pass at trying to find an OEM part online, but nothing would arrive quickly enough for me to make my intended departure. Finally, a friend I’d been texting with about my conundrum mentioned he’d used Home Depot hoses for intake parts on his Porsche 944 in the past in a pinch.

Cursory research indicated to me that most industrial rubber can withstand about 200 degrees Fahrenheit, which is the upper end of what I’d expect under the hood of my car. I consulted with Staff Writer Chris Rosales who concurred that, especially since the car was non-turbo, a non-automotive hose ought to get the job done.

I hiked to a hardware store and found a three-inch long and three-inch wide rubber coupler hose—the size was pretty much spot on when I compared it to the scrap of paper I’d ripped into approximately the shape of the desired hose. It was labeled as a plumbing product and came with two appropriately sized hose clamps. $7.99 later and it was in my hands.

On my way home I texted The Autopian‘s David Tracy, another professional car nut you might have heard of, a picture of my hose to get some validation. To my relief, he concurred it should work. He added that I might want to make some kind of heat shield to maximize the rubber’s life—so I detoured to yet another auto parts store and was able to find a little roll of heat wrap that almost looked perfectly sized for my weird little project here.

That heat wrap turned out to be the most expensive element of this little endeavor at about $35, but I suppose it’s better to take minimal chances on a road trip of this length. I grabbed a spare rubber coupler for the same reason, at The Smoking Tire‘s Zack Klapman’s wise suggestion.

Of course, the hardware store hose isn’t perfectly sized—I wish it was a hair longer and skinnier in diameter. I went to two other hardware stores hoping to find more choices, but they all only sold the exact same piece that I already had.

I toyed with the idea of using some kind of grease or even RTV around the lips of the hard pipe as a sealant, but ultimately decided it’d be better to just crank the hell out of those hose clamps and hope for the best than be worried about a stray piece of RTV breaking loose and being eaten by the throttle body.

It must be working well enough though, because once I powered up the car with my contraption in place I was greeted by a smooth, steady idle. Hell yeah, raccoon repairs for the win! I’ll be keeping a close eye on the condition of this rubber coupler and changing it out for a proper automotive hose as soon as I can, but at this point, the VG engine seems happy with its new breathing situation.

With that, I’m off to Angeles Crest Highway and ultimately Flagstaff, Arizona followed by Taos, New Mexico, and then whatever waystation I end up at between the Southwest and my halfway resting point of Madison, Wisconsin.

So the morals of the story this time:

Wish me luck as I try to send this Z all the way to the Larz Anderson Automotive Museum for its Japanese Car Day on October 16 over the course of the next few days.

Send us an email: [email protected]

The post I Fixed My Nissan Z With Hardware Store Plumbing and My 3,000-Mile Road Trip Is Underway appeared first on The Drive.