I Upgraded My BMW 1 Series With an M Sport Seat From the U.K. 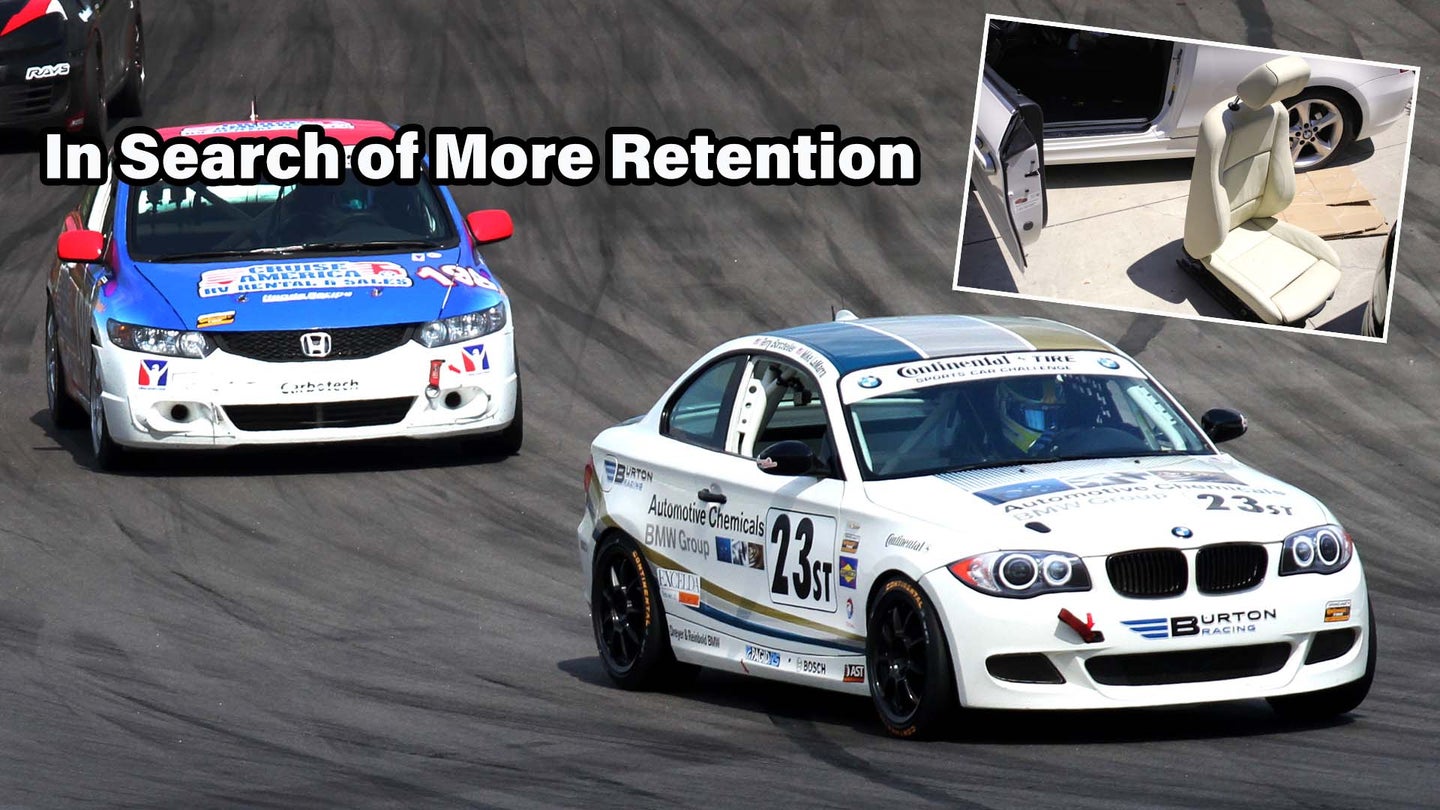 It’s been a little more than a month since I last laid my greasy, Torx-bit-clutching hands on my 2011 BMW 128i. The last wrenching sesh of doing some under-hood cleaning and replacing my N52 inline-six’s serpentine belt proved fruitful as I didn’t hit any snags, and now I possess a little more peace of mind for the next 80,000-or-so miles.

Just recently, I decided to take advantage of BMW being the Honda of Germany (I’ll explain) and install an upgraded OEM seat from a United-Kingdom-market E81 (the hatchback body of my car’s generation) 1 Series with the M Sport Package. This proved to be an excellent decision, as it didn’t cost me a whole lot of money yet made a world of difference. The fact that it seems like a pretty rare seat here in the States is simply a bonus.

When I say BMW is the Honda of Germany, it’s because it has historically been really easy to swap parts across the brand’s trims and platforms. Like German Legos. A lot of the E8X-gen 1 Series’ parts are shared with the E9X, including the same selection of engines (mostly), interior pieces, suspension bits, and more. Naturally, intra-generation parts are even more swappable.

The seat I bought from a used-parts retailer on ebay.co.uk is in the same weird Lemon Boston leather color and material as my 128’s factory seats and has the same manual adjustability, too. Yet, it features better, more supportive bolstering for twisty-road retention because it’s an M Sport seat. It also tilts back and forth, and seems to sit ever so slightly lower than the plain OEM driver’s seat, but more on that later. I got the idea of swapping in the U.K. E81 interior componentry from commenter The_Arch_Duke, who opened my eyes to the prevalence of manual M Sport seats in the U.K.

With shipping, I spent $414 (318.89 quid) on it, which isn’t cheap. But, considering I was considering buying rare-as-hen’s-teeth fully manual E90 M3 seats in the wrong color for a lot more money, I think I did all right. Especially considering the seat’s condition, which I’d rate as looking far fresher than my OEM chair. This brings up a fun bonus to buying seats from the U.K.: Because the Britons drive on the other side of the road, the front-left seat is likely to experience less wear than the front-right. Plus, I don’t know this for sure, but I’m willing to bet replacement front-right seats are in higher demand over there, thus keeping front-left seats’ pricing lower.

To make things even sweeter, it was a very logical and simple installation process.

I didn’t have any trepidation about installing the seat, as I’ve swapped in both factory and aftermarket options in previous cars, but I did disconnect the negative battery cable so as to not upset the airbag and belt pretensioner charge in the process. One should always do this when working with airbags, by the way.

Actually swapping the seats was an easy process because I had a bunch of parts that didn’t require any customization. Once I had both seats sitting side by side to compare connectors, I swapped over the seat belt receptacle and took my time ensuring I had all wiring harness connectors routed properly, which BMW thankfully does quite logically. There is only one way that three separate connectors—one for the seatbelt warning and pretensioner (also known as the teeny little explosive charge in the event of an accident), one for the airbag, and one for I think the E81 seat’s optional heating and adjustable bolsters—can sit in the big yellow main harness.

Then, it was just a matter of putting the E81 seat in the proper spot, lining up the mounting holes on the track, and tightening down four bolts. However, once I sat in the seat, I noticed that the adjustable bolsters weren’t working.

After a bit of research, it turned out that I needed to do some minor customization with the wiring to get power to those. Luckily, it seemed relatively easy and straightforward—off to Harbor Freight for wiring supplies I went.

After I reconnected the negative battery terminal and felt it out, man, what an upgrade this was. The more substantial bolsters feel great and will aid in retention on twisty roads, as well as on track. The seat seems to sit a tad lower than the previous factory unit, which is always a plus for an awkwardly shaped tall dude like me, and it’s in far better condition than the old seat. It also doesn’t look immensely different from the factory front passenger seat—I’ll probably swap in a matching passenger seat at some point, but the mismatch will do just fine for now.

As someone who’s always been a big fan of modifying cars in an OEM-plus fashion, meaning utilizing factory part numbers and selecting fairly mild and unobtrusive visual mods in the aftermarket, I’m glad I went this route. It’ll be nice to have something that’s good for daily driving with solid retention for the twisties. I bought a gently used Sparco QRT-R racing seat a few months back to throw in the 128 eventually, but I think I’ll sell it and put the money toward other stuff. Plus, being this is a factory seating arrangement, I can take advantage of a street-legal Schroth Quick Fit four-point harness with Anti-Submarining System technology, which the German racing harness firm offers for E8X and E9X BMWs. That, as well as some other great interior modifications, will definitely show up in future blogs.

The post I Upgraded My BMW 1 Series With an M Sport Seat From the U.K. appeared first on The Drive.