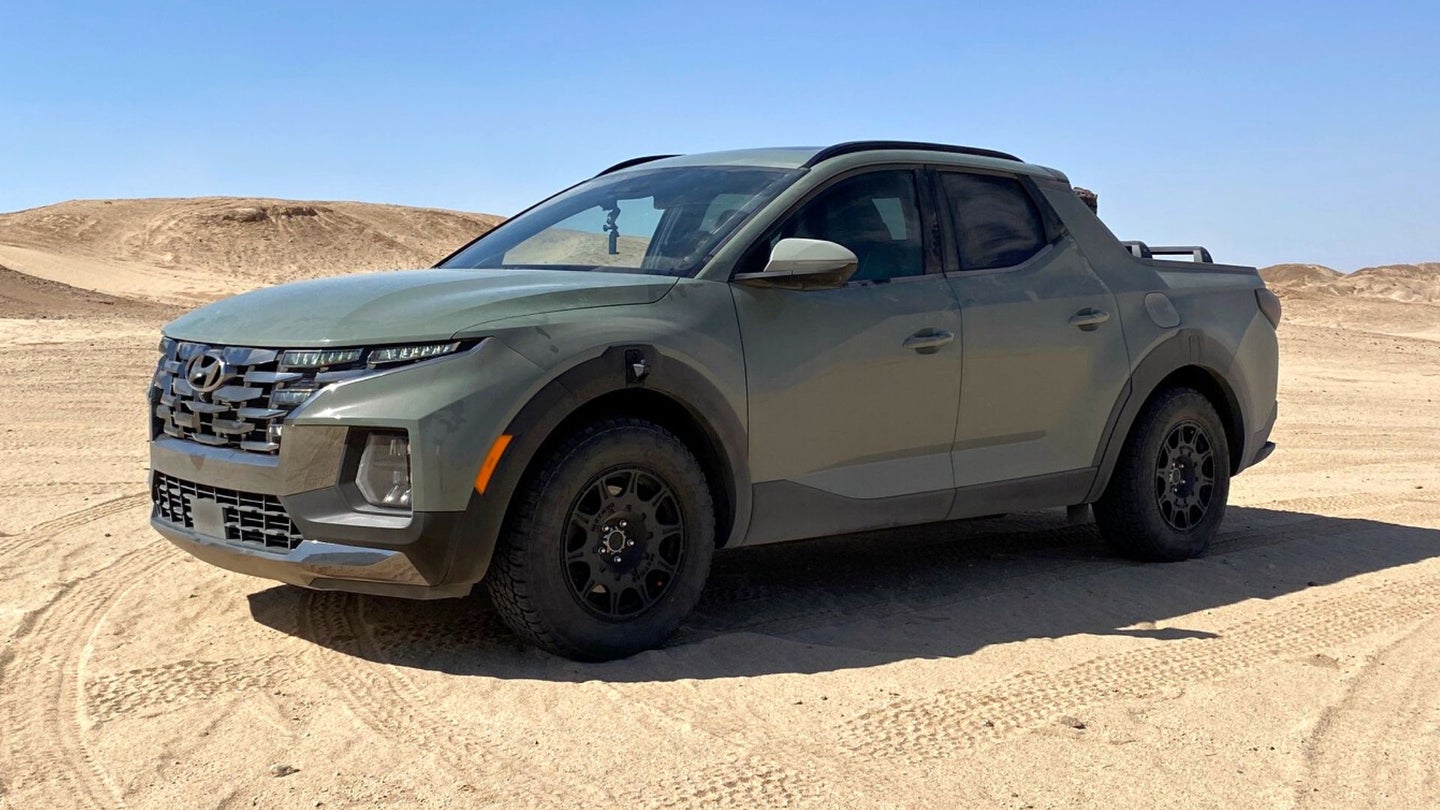 In the last three years, I’ve completed motorcycle training, learned how to ski, and drove a DeLorean (Back to the Future goals unlocked!). Somehow, I also caught the off-roading bug and signed myself up to compete in a 1,500-mile rally without the help of any digital GPS tools. That means I have to know how to read a topographical map, plot latitude and longitude, and successfully use a compass. Since I’m going to participate in the Rebelle Rally this fall, I have to learn not just the basics of these skills but practice the hell out of them. Here’s how my first training session in the desert—and the resulting revelations about the competition vehicle, my team, and preparing to find the edges of my own fortitude—went.

This October, my teammate and fellow automotive journalist Jill Ciminillo and I will take on the Rebelle Rally, a woman-only competition that starts on the north side of Lake Tahoe and finishes in the Imperial Sand Dunes near the border of Mexico. For eight days, we’ll be off-roading in a 2022 Hyundai Santa Cruz through the mountains and deserts of Nevada and California and collecting as many checkpoints as we can.

Wait. A Santa Cruz? As in that weirdo utility vehicle that looks kind of like a Ford Ranchero and a Hyundai Tucson had a baby? Yes. That one. When Ciminillo and I decided we wanted to compete, we thought about what would be different and interesting, and the Santa Cruz was at the top of our list. There’s no doubt that it doesn’t have the approach angle of a Jeep Wrangler or Land Rover Defender, so it can’t tackle some of the more challenging obstacles—because that’s not what it’s made to do. But after two days of off-road training and testing in April, we discovered that it has other attributes that punched above its pay grade and pleasantly surprised us past our expectations.

We arrived in San Diego and picked up our Santa Cruz at the airport for four days of training (two in the field and two classroom navigation practical classes). The two valets on staff at Aladdin’s Airport Parking gushed about the car, telling us multiple times that they had never seen a car like this before, and they see a lot of cars. They wanted to see the inside and walk around the outside and they were eager to hear about what we were doing with it. In the process, we observed the upgraded Nitto all-terrain tires on Method wheels, the new skid plate to protect the underbelly, and the full-size spare tire mounted on new racks that were attached to the bed frame.

Starting at about $25,000, a base FWD Santa Cruz is solidly in bargain territory. Our steed is an AWD Limited with all of the options, which is closer to $40,000 and is still a fair price for a car with heated and cooled seats, a clever array of storage options, and a turbocharged 2.5-liter engine making 281 horsepower and 311 pound-feet of torque.

Ciminillo calls it a pickup truck and Hyundai calls it a “sport adventure vehicle.” I call it a practical vehicle that teeters between a compact SUV and a truck. There’s a reason the Ford Maverick is so popular right now, including the fact that it has a ton of smart storage cubbies, a truck bed, and an easier-to-park footprint than the giant pickups were seeing in recent years. Once we hit the road, we traded off the driving duties and tested out the speed and suspension on the highway, finding it to be a pleasant ride. Along the way, we chose our team name: the Brute Squad, after a line from The Princess Bride. The name is a bit tongue-in-cheek since neither Ciminillo nor I are particularly brutish (but we are both Italian).

I appreciate the retractable tonneau cover on the Santa Cruz, which has a practical strap to help pull it closed. With the two rack attachments, the cover doesn’t open and that’s not ideal, but we’re exploring other options. Either way, the Santa Cruz’s 41-inch cargo box capably stored our two pieces of luggage, a mesh bag with a Bubba recovery rope and soft shackles, an air compressor, two shovels, and two MaxTrax boards. And there was still room for more in the lockable underfloor storage, which is waterproof and drainable.

On the first day of our training, we met up with Rebelle Rally founder Emily Miller, champion navigator and X Games gold medalist Chrissie Beavis, and the Rebelle staff near Brawley, California. Former Rebelles like Chris Benzie, a former aerospace engineering executive, led us through several exercises to get us warmed up on sandy and rocky terrain. With its ground clearance of 8.9 inches (before the skid plate installation), the Santa Cruz still has a couple of inches of advantage over the Kia Sorento PHEV, which was the winning vehicle in the X-Cross (crossover) class in 2021.

We encountered a rock step the Hyundai’s 17.5-degree approach angle couldn’t tackle and we didn’t even have to take out our protractors to evaluate. Our coaches advised us to build a rock bridge for the front tires or use our MaxTrax boards to achieve the same effect. Or we could go nose first down the hill, which was the most-fun option.

We did high-center it (part of the Santa Cruz was stuck on higher ground than the wheels) in the sand during our side-hill practice because we didn’t have a sense of its consistency; after several shovelfuls of the stuff and a tug from fellow rookies in a sunny yellow 2000 Isuzu VehiCross, we learned our lesson. Later in the day, we had the chance to help two new friends in a Wrangler who found themselves stuck. Instructor Chris Walker from Overland BC handed us a receiver hitch and we connected the recovery rope with a steel screw pin bow shackle to the Jeep. One gentle lurch later, the Wrangler was free and we were triumphant. The Santa Cruz has the ability to tow up to 5,000 when it’s properly equipped and it proved it had the brawn.

What surprised me was not just the little ute’s ability to surf the sand as well as a pro boarder, but how much I enjoyed it. Miller got us in the headspace before we tackled the sloping dunes, explaining the formation of the curves by the wind and the resulting slip faces to avoid. Ciminillo and I started on a bunny hill and worked our way up to greens and blues, in skiing terminology, and found that a measure of patience and corresponding blips of the throttle to get uphill could get us through all the foothills and some of the taller dunes.

We learned that the Santa Cruz’s transmission responded very well using the manual setting, which we could adjust via the paddle shifters or on the gear shifter. It was happiest in first and second gear going up steeper slopes and second or third swooshing up and down the moguls.

Really, the key was feeling out the rhythm of the weight of the car and what it could comfortably tackle, and with each mile, we gained more confidence in the vehicle. In some cases, the rack-mounted tire could prove to be a balance challenge, but we found that we didn’t notice much of a difference even as it migrated to the right side of the rack, which conveniently opened up a better view through the back window.

Overall, we were more than pleased with the Hyundai’s abilities, and we will be pushing its limits to see what it can do and what equipment we might need to make it even better. The harder part is going to be heading into the desert without GPS. But heck, we’re going to learn how to do it and prove to ourselves that it’s never too late to add another skill to our repertoire. Rebelle Rally, here comes the Brute Squad.

Get ready to cheer us on this October! Have a comment? Send it to [email protected]

The post I’m Competing in a 1,500-Mile Off-Road Rally With a 2022 Hyundai Santa Cruz appeared first on The Drive.