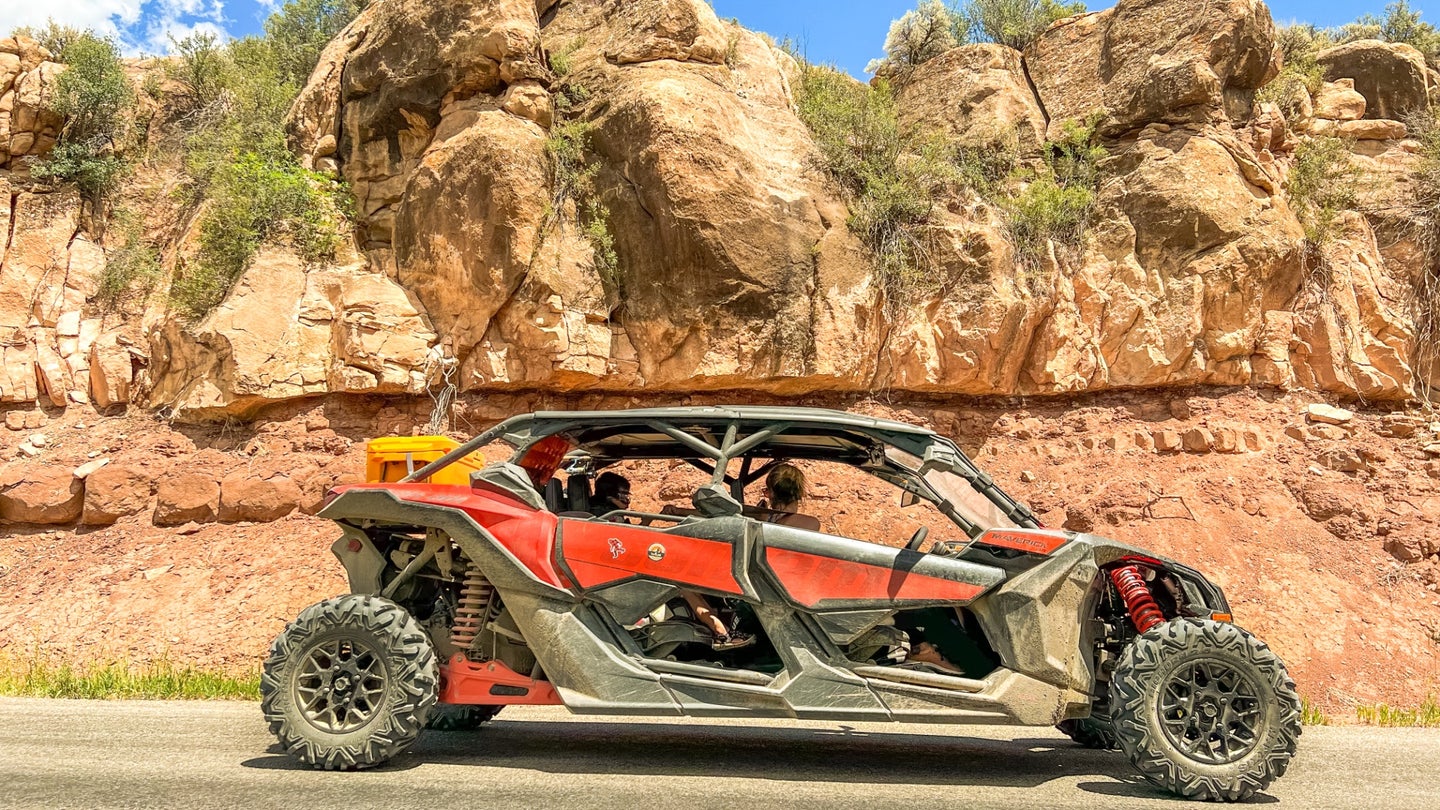 I’ve talked about my family’s 2021 Can-Am Maverick X3 DS Turbo R a few times here on The Drive, but I haven’t really detailed its ins and outs. In my year of ownership, I’ve outfitted it with a few choice products, put more than 800 (off-road) miles on the clock, and started really thinking about what the overall build plan looks like for the future. Let’s talk about what I’ve done and what I’m thinking about doing.

The Can-Am Maverick X3 Max DS Turbo R comes pretty stripped down from the factory. We chose the base model as it was easier to order (yes, we ordered it), and it was in our price range. The X3 Max DS Turbo R is the full-size, four-seat, turbocharged model and features selectable all-wheel drive, a 171-hp Rotax three-cylinder engine paired to a continuously variable automatic transmission (CVT).

Fox shocks come at all four corners with three rebound settings, and they’re fully adjustable if you want to get dirty. The suspension also offers 14 inches of ground clearance and a full 20 inches of travel at full droop. That’s about it in terms of specs. We chose one option, and that was the Ryco Moto street-legal kit (UTVs are street legal in Utah except on highways) for an extra $800. The kit includes turn signals and a few lights, all of which were installed by the dealership.

What you also get are a staggered set of Maxxis Carnivore tires that to me are a mixture of sand/mud/gravel tires. They’re pretty aggressive and super fun in snow, albeit not perfect. What they aren’t great for is pavement, and I can already tell from the limited time we’ve spent on paved roads, they wear out much quicker than in our off-road adventures.

What the base model doesn’t come with is a windshield or a roof.

Pretty much right after we bought it, we figured out we needed a windshield. While we could’ve strapped goggles to everyone’s heads, the rocks, dirt, mud, and other debris kicked up on the trails was impossible to ignore. We went with a SuperATV polycarbonate windshield, and it’s held up well. It protected us a few times from larger rocks kicked up by side-by-sides in front of us and kept the wind off our faces, which is especially nice in winter.

I also grabbed a UTVMA jump seat as we have three children and, as mentioned, the X3 Max only seats four from the factory. It comes with a four-point harness that’s easily adjusted for different shapes and sizes, but it’s most definitely just for children. Installation wasn’t too difficult, but removing both rear seats was required. Took me all of about two hours to complete. That said, my kids now fight over who gets the middle seat as it offers the best forward view.

From there, I drove it for a while without doing much else. But I quickly found that my stature (6 foot, 4 inches tall) wasn’t a good fit in the stock driving position. I was too high, and my knees were constantly on the steering wheel. At first, I looked around for a seat that I could swap in to solve my issues, but leave it to the forums to have exactly what I was looking for that would not cost me a single penny.

When Can-Am built the Maverick X3 line, the company knew it’d have folks of my height getting in on the fun. In order to accommodate them, it built the seat to be adjustable. From the factory, the seats ride on tall spacers that boost the seat height, but you can just flip them around and drop the seat nearly two inches. Took me 20 minutes total, and I now fit wonderfully in the driver’s seat.

Recently, we added a Sport Roof directly from Can-Am, and it instantly changed the vehicle’s dynamics and our ability to go for even longer rides in the backcountry. Over the Fourth of July weekend, we put nearly 200 miles on it, all of which was off-road and in the baking sun. The roof protected us, and we just wanted to keep exploring. Stay tuned for a full install and review of the roof.

As with every project, there are always add-ons that, well, get added. The Can-Am is no different. The Maxtrax traction boards came in handy when we got stuck up to the frame rails in snow, but that outing showed us their limitations as well. Once we got back, I ordered a RhinoUSA Survival Shovel that I strapped to the driver’s side door for the next time we’re stuck in knee-deep snow or sand.

I’ve also added to the kit a recovery strap I picked up from Ace Hardware that has a 10,000-pound load limit, which is honestly overkill but it was on sale. Haven’t needed to use it yet, but better have it and not need it than need it and not have it.

What we also found was that the polycarbonate windshield generates a lot of static when you roll through our trail’s dirt. It’s like a magnet for all the dust that’s kicked up and that quickly cakes the exterior and interior surface of the windshield. What helps reduce that static cling is good old-fashioned Rain-X. Clean the surface with whatever cleaner you have and then apply a healthy dose of Rain-X to both sides. You’ll remain somewhat dust-free for a few outings.

I also bought a Dometic rotomolded cooler that was on sale recently, along with two straps to secure it to the Can-Am’s rear decklid. Can-Am sells a cooler that fits the Maverick X3 perfectly, but given that we switch between the Can-Am and our Ridgeline for hikes, camping, and other activities, the Can-Am one is really too tailored for the Maverick X3. The Dometic was the right choice.

Where I really want to take the Maverick X3 Max is toward an overlanding/rally theme, and that includes a few choice upgrades I see for the future.

First, I have a set of off-road lights from Lightforce sitting on a shelf in the garage that need to be added for better night-running visibility and increased livability when camping. But to go camping and bring all the gear we’d need to keep three very young children content while in the woods, we’re going to need to bring along a bunch of camping gear. There’s some storage in the Can-Am, but it’s at a premium, especially because the Dometic cooler takes up a good amount of rear decklid space.

There are ways to add storage space to your side-by-side. Chief among them is a roof rack. A handful of manufacturers make racks that would accommodate a good deal of stuff, including one from Can-Am itself that I could use and also reposition where the Maxtrax are for better rearward visibility and increased stowage. I could also attach the Lightforce lights to a roof rack, which would make their installation easier and bring them up higher for increased long-range visibility. It’d also look excellent.

I’d also like to swap out the wheels and tires for units that are more gravel/road focused, something like Toyo’s Open Country AT III or BFGoodrich’s All-Terrain T/A KO2. Both of these are taller than the stock 28-inch Maxxis tires, which makes swapping them slightly difficult as the rear trailing arm has a slight bend in it. To swap the tires, I’ll need to get a new set of rims with a plus-2 offset that’ll safely bump out the tire. Method Race Wheels has a nice set of rims I dig, but I’m not sure when a swap could happen.

Changing the tires and rims will also have an effect on the Maverick X3’s suspension, giving me more clearance but reducing travel. I’m OK with both. They’ll also be quieter than the Maxxis tires are.

Speaking of quieter, one thing I really want to do is set up a comms system so that my wife, children, and I aren’t shouting to hear one another. There are a few setups I’m perusing, but Cardo’s PackTalk mesh system is intriguing. It’ll also save our long-term hearing as the Maverick X3 can be quite loud when railing through the woods.

As for anything else, I’m not sure. There’s a litany of products designed to make your side-by-side even more rad, but these are the things that I want to do before going even farther down the rabbit hole. I mean, there are tunes, exhausts, new suspension pieces, and more that could take me into places I never dreamed. We’ll see what happens.

What do you think? Does anyone have any suggestions or alternative options for products I’m still looking at? What have you done to your side-by-side? Sound off in the comments.

The post I’m Turning My Can-Am Maverick X3 Max Into an Overlanding UTV appeared first on The Drive.