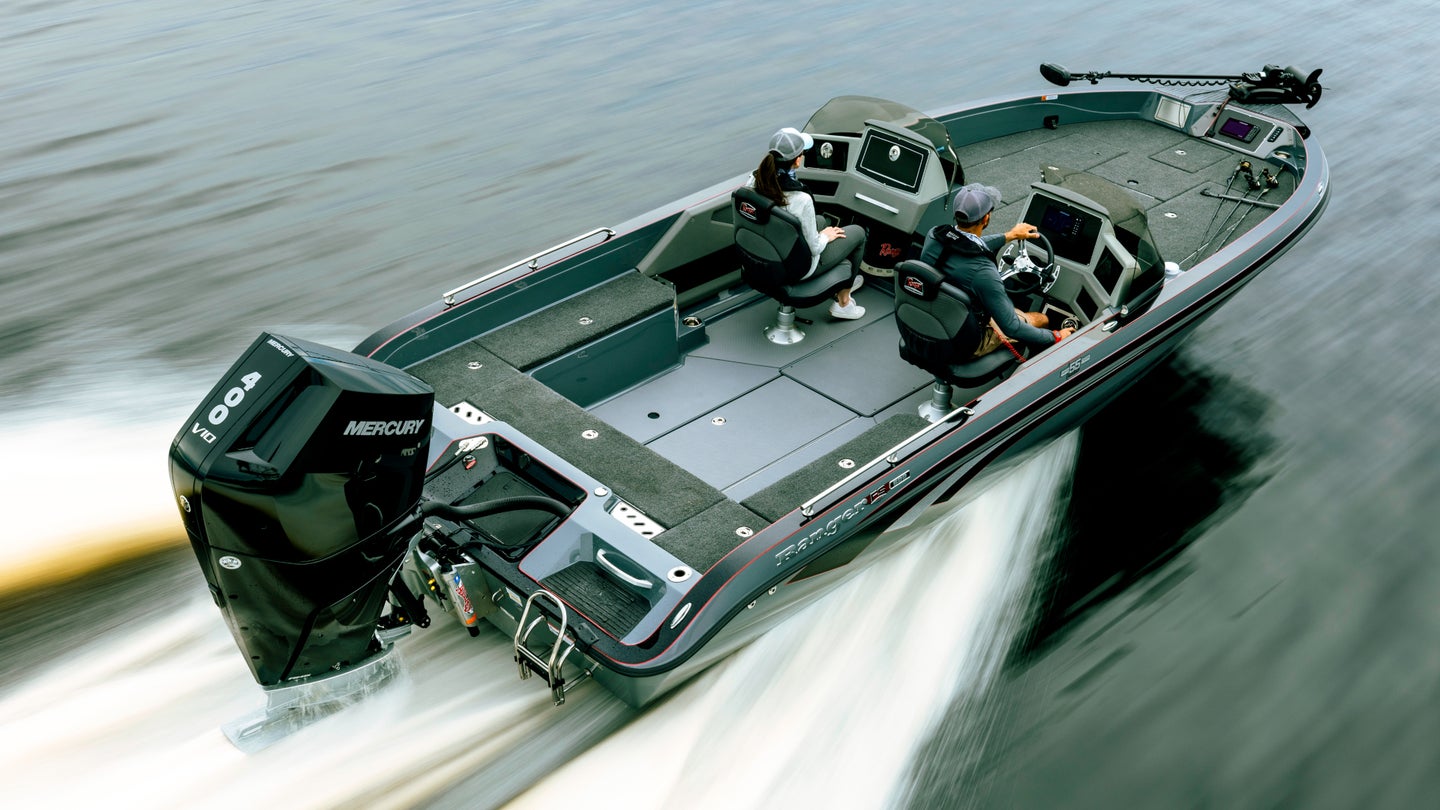 Mercury Marine has added new V10 outboard motors to its lineup, marking an industry first in the boating world.

The new Verado outboards are 5.7-liter naturally-aspirated V10 engines available in two trims, boasting 350 and 400 horsepower respectively. The engines were intended to deliver big power while offering lower noise, vibration, and harshness than the competition. Despite the new V10 configuration, they’re designed to work with industry-standard 26-inch mount spacings used by more typical V8 outboards. The full outboard has a dry weight of 695 lbs in either configuration.

The power numbers might sound conservative given the displacement, but these are typical figures for a marine-spec engine. Boat engines typically run at full throttle for long periods of time. Thus, they’re generally more conservatively tuned and much more stout than their automotive counterparts. Plus, the Verado outboards are making those numbers on regular 87-octane fuel.

The V10 also debuts a new gearcase for Mercury. It’s intended to be more hydrodynamic than earlier designs, reducing drag and maximizing fuel economy. This is also helped by the engine’s new Revolution X propeller, similarly designed for improved handling and better efficiency. Other features include adaptive speed control for maintaining consistent engine RPM in changeable conditions. It also comes with quiet and sporty exhaust modes, just like so many modern sports cars.

V10 engines are historically far less common than V8s and even V12s. That’s partly down to the fact that the V10 configuration does not have perfect balance from its rotating components. Depending on the V-angle chosen, and other parameters, V8 and V12 engines can be superior in this regard. In many cases, too, when designers hunted for more power, V12 engines were developed from existing inline-six designs. The Jaguar V12 is a commonly-cited example. Inline-five engines are incredibly obscure, historically speaking, and thus didn’t serve as a similar inspiration.

However, recent decades have seen V10s become more popular. Modern engineering has helped carve out a niche for the design, while solving some of the V10’s drawbacks. In certain applications, V10s have offered greater power figures or a higher redline than a comparable V8, while eschewing the greater complexity of a V12. Plus, balance shafts have been used as a tool to reduce vibrations. The Dodge Viper is often cited as the first major mainstream application of the V10 engine, followed shortly after by the Dodge Ram. The V10 layout has also become adored in limited-run supercars like the Lexus LFA and the Porsche Carrera GT.

In this case, Mercury found the V10 layout could neatly fill a performance gap in its Verado range. Those looking for something smaller can spec a 4.6-liter V8 with 250-300hp. Meanwhile, the 7.6-liter V12 has a mighty 600 hp for those with big boats and/or a serious need for speed.

The new Verado V10 sits nicely in between, offering more power than the V8, and faster, cheaper spark plug changes than the V12. Plus, it’s more compact than the V12, too. If that’s what you’ve been looking for, the Verado V10 could be the perfect outboard for you.

The post Industry-First V10 Outboard Boat Motors Make Up to 400 HP appeared first on The Drive.