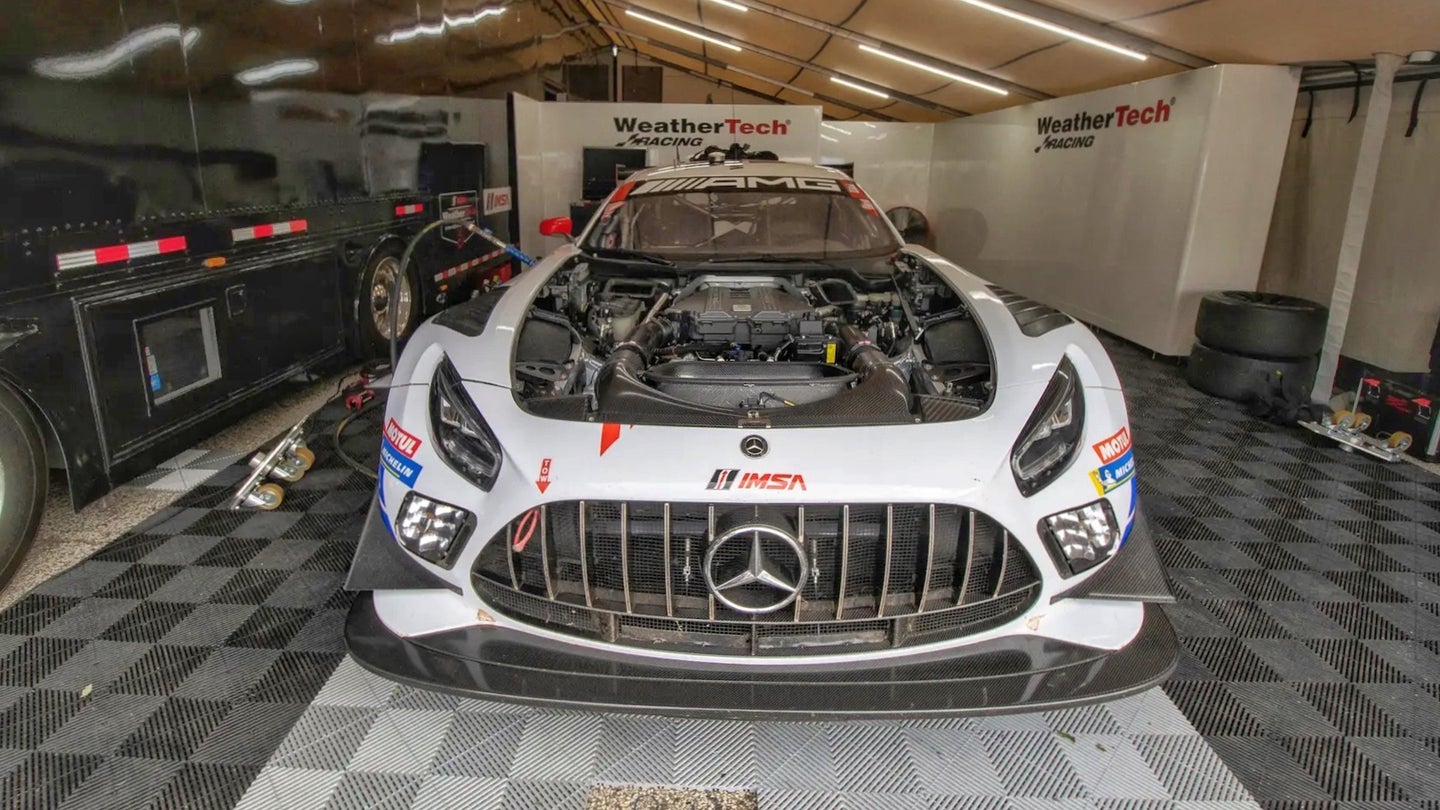 Car manufacturers provide a monumental amount of support to professional racing teams who elect to use their products. From factory racing efforts to customer teams, large automakers like Mercedes-AMG have entire divisions dedicated to supporting these organizations. And while most of the work happens behind the scenes, I recently had a good look at how the Three-Pointed Star runs its Manufacturer Parts operation while at the 2022 Petit Le Mans 10-hour endurance race.

For those running the Mercedes-AMG GT3 or GT4 in IMSA WeatherTech SportsCar Championship, Michelin Pilot Challenge, SRO America’s Fanatec GT World Challenge America, GT America, and Pirelli GT4 America, Mercedes-AMG Motorsport sends parts, personnel, and all kinds of support to each race. This includes a fully-stocked 18-wheeler to keep the teams in top shape and help get them across the finish line.

Given full access to their operation, here’s what I discovered.

Despite going out of production in 2015, the tried-and-true M159 motor (the racing version of the W204’s venerable M156) still has a prominent home in the Mercedes-AMG GT3. It’s a hearty hunk of metal, too, as long as it’s well-maintained. And in order to maintain them, a healthy inventory is a must.

“A professional team probably runs 10,000 kilometers in a season, so you could easily run two seasons with one engine before you have to revise it. Then, after being checked and revised, it’s good for another 20,000,” said Julian Schoch, Project Manager of Customer & Team Management, Mercedes-AMG Motorsport when asked about the M159’s longevity.

Despite not gracing its street-going counterparts in more than a few years, the M159 is still in good stock, too. “I would roughly guess after 100 SLS race cars, and now we’re currently producing roughly the 250th GT3 car … plus spares … I would say it’s 400 engines in total,” Schoch added. Not bad considering how long ago Mercedes traded naturally aspirated V8 gusto for a more efficient (though more potent) twin-turbo V8 character.

In GT4 (IMSA’s GS Class in Michelin Pilot Challenge), where Mercedes-AMG’s twin-turbo 4.0-liter V8 is homologated for duty (as well as the Aston Martin Vantage AMR GT4, but Mercedes doesn’t do any special prep there, just sells Aston a street-going version), the engine is rated to last as many as 40,000 kilometers (25k miles)—double the M159. This was a little surprising, as you’d normally assume that the added heat and complexity of its turbocharging would shorten its life. However, Schoch says it’s because the 4.0 is de-tuned for the class and only makes roughly 500-550 horsepower, whereas its street-going counterparts reliably put out well over 600.

Reducing the number of mechanical issues that could pop up is one less concern to factor into a team’s race strategy, and it helps even more if the engine can last at least two whole seasons if maintained properly. Additionally, so does some emergency relief in the form of trackside factory support from AMG directly.

At Petit Le Mans, AMG’s parts truck was parked in the middle of the paddock to provide any additional support that customer teams might need. Teams are required to carry as much as they can in terms of spare body parts, wheels, brakes, mechanical components, and more. But for additional bodywork, finer bits of componentry, or even a fresh engine or gearbox, Schoch and his colleagues are there to assist.

“We don’t carry a spare car, but we do have a spare chassis back at our shop in Mooresville, North Carolina,” said Jeff Campey, who drives the mighty silver rig and manages its extensive inventory of parts. “We run both GT3 and GT4 support out of the same truck, whereas other manufacturers have one hauler for each.”

The truck is on the road for most of the season to accommodate both IMSA and SRO. Being centrally located on the Eastern Seaboard means resupply is a little easier, but ensuring that it has enough inventory on board before setting off to a series of West Coast races can be a little challenging.

“It’s usually because that part has been exhausted worldwide,” Campey said about part shortages. “If it’s available from Germany, we typically have it. The one thing we don’t carry a lot of is wheels—a set plus two fronts for GT3 and GT4. But, when you think about it, teams should only need one. Very seldom do you crash and wreck all four wheels. When someone comes to us and requests all four wheels, it’s usually because they haven’t done their homework before coming to the track and have a bent or damaged wheel.”

While I was inside the truck, customer team Team Karthoff came by in search of a remedy for a fuel flow issue, which was causing the No. 32 AMG GT3 to experience power loss and at times almost completely die on track. They were in search of a sensor to troubleshoot the issue, and it ended up being pinpointed as a fuel regulator issue.

Fortunately, I didn’t witness the AMG crew leap into action and pull a factory-fresh M159 or M177 long block from the depths of its upstairs storage area.

Pferdestärke in a Pinch

It’s fascinating to see how deep customer support goes in top-level GT4 and GT3 racing. While it’s not intended to make up for any team’s lack of planning, having a small army of support to keep Mercedes-AMG cars and teams running reliably and safely is crucial—not just for the teams, but also for the brand. Success on the track is good for publicity, and not to mention the cash it brings in. The parts inside the 18-wheeler aren’t free, after all.

Shortly after wrapping up at Road Atlanta, the truck was scheduled to return to Mooresville, re-stock, and head back out on the road to support SRO Fanatec GT World Challenge America’s eight-hour race at the Indianapolis Motor Speedway a few days later.

The post Inside Mercedes-AMG’s Rolling Bank of GT Race Car Parts appeared first on The Drive.