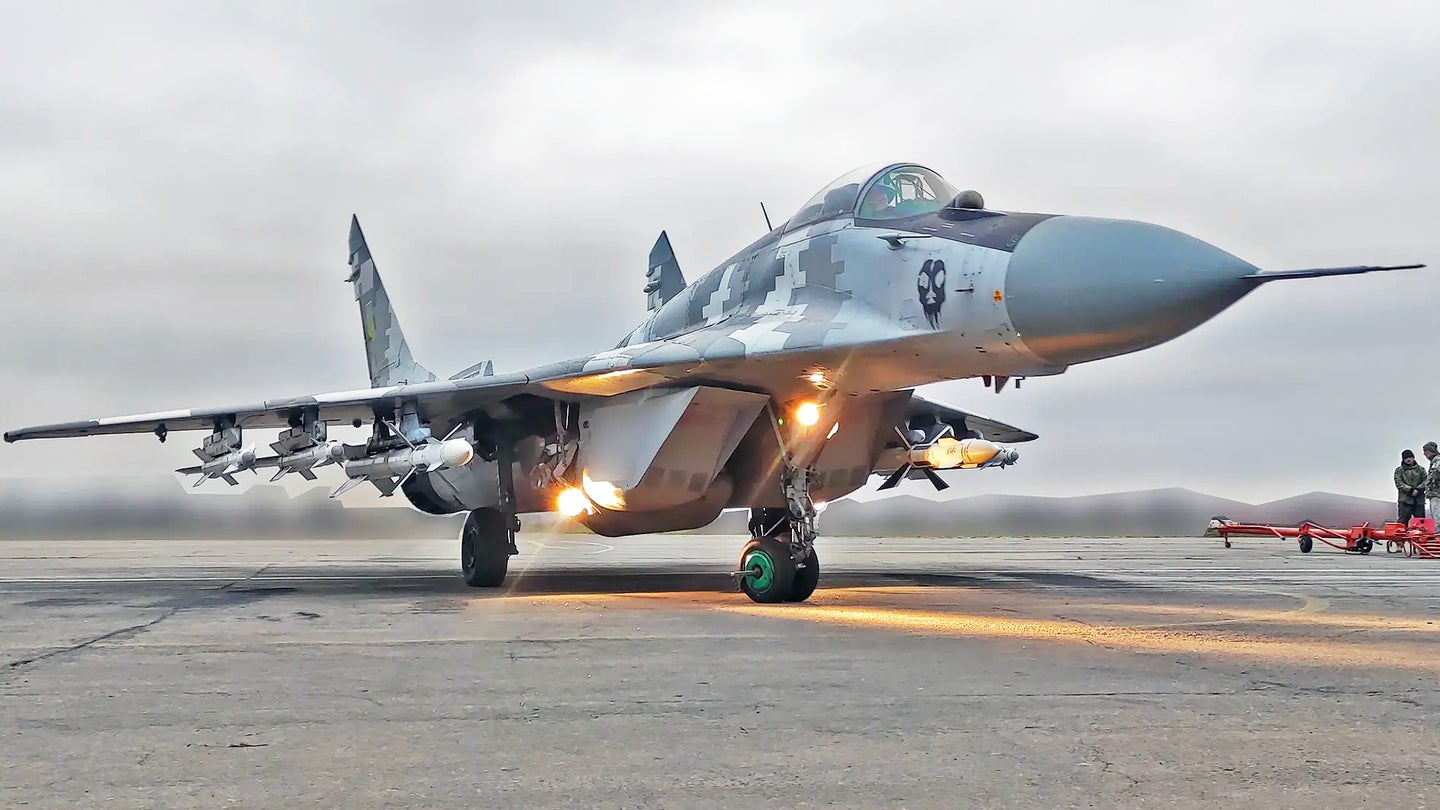 Back in March, during a period of frenzied air combat over Ukraine, The War Zone carried an exclusive interview with a Ukrainian MiG-29 Fulcrum fighter jet pilot, known only by his callsign “Juice.” In the nine months or so that have passed, the nature of the air war over Ukraine has changed in significant ways, including the appearance of new weapons and tactics on the Russian side and a widespread campaign of attacks on Ukrainian infrastructure targets. But the Ukrainian Air Force has remained resolute in its defense of its homeland, despite not yet receiving the new fighter jets that it clearly needs. We caught up again with Juice to assess what’s happening in the air war today and to look at prospects for new equipment in the future. In the first of a multi-part extremely in-depth interview, Juice describes the fight against Iranian-supplied Shahed drones.

Speaking to The War Zone from a secure bunker buried in a secret location in Ukraine, Juice explains that he’s currently assigned air defense duties in his MiG-29, including round-the-clock quick reaction alert (QRA) sorties to respond to Russian air activity in his sector. He is also keen to note that, despite the relentless Russian onslaught, his conditions — with heating and reliable internet access — are far more comfortable than those of the Ukrainian ground troops fighting in the trenches, especially around the key eastern town of Bakhmut, where winter conditions resemble those experienced during some of the battles of World War One.

Despite the continued threat of Russian aircraft and drones, Juice tells us that he is still yet to claim a victory in air-to-air combat.

“Unfortunately, my score is still not open,” he explains, although not due to a lack of target opportunities, of which there have been plenty. “Unfortunately, I didn’t succeed due to different issues.” As well as having experienced certain technical issues that prevented successful engagements, the changing nature of the air threat has made the job of the Ukrainian fighter pilots harder still.

Back in March, Juice reflected on the challenges involved in shooting down a subsonic cruise missile, of the kind that has been used to bombard key military and civilian infrastructure targets. Now, Shahed drones have been added to the mix, and they are far from straightforward to counter, especially in a Cold War-era fighter like the MiG-29.

“I mentioned before about cruise missiles and the situation with drones is even worse, especially during the nighttime,” Juice adds. “It’s very difficult to search and track and to engage these types of threats.”

The month of October saw a notable spike in the Shahed attacks on Ukraine, with Juice suggesting that the tempo of Ukrainian Air Force air defense sorties was comparable with the high-intensity raids back in March.

“I had a lot of sorties against [Shaheds], especially during October,” Juice explains. “And there were a few very good interceptions, with a good air picture, and even a few cases when I was ready to fire. But unfortunately, they were right above the towns and settlements, and I was not able to do my job because it could do more harm than good. That’s why I canceled those engagements.” Instead, Juice let the drones fly toward areas covered by ground-based air defenses, where the Shaheds were then shot down. “Unfortunately, it’s a pretty common situation and it’s a great challenge for the fighter pilot.”

As well as the problem of these drones often being encountered above populated areas, as Juice experienced, even generating a firing solution on a Shahed is tricky, with the picture on the radar screen looking fairly similar to a flock of birds, or even a truck moving along a road. With a cruise missile, the higher speed and resulting Doppler effect mean the MiG’s radar has an easier job of detecting the threat, but a slow-flying Shahed can easily get lost among the rooftops and other ground clutter.

One pilot who had better luck against the Shahed threat is Vadym Voroshylov, callsign “Karaya,” who on October 12 shot down five of the ‘kamikaze drones’ before he was forced to eject, in an incident we covered at the time. A photo of his bloodied face, after ejection, recently began to do the rounds on social media and Voroshylov has been awarded the Hero of Ukraine for his feat.

Juice recounts that Karaya shot down the first three drones during the daytime, which was itself very lucky since they are usually launched at night. “He was lucky to find them visually,” Juice continues, “so he was absolutely 100 percent sure that they were Shaheds. He engaged immediately and shot them down.”

Once Karaya encountered the next two Shaheds it was dark, but he was over an area where engagement was considered safe.

Finding these drones at night is no easy task and is made more difficult by the blackout conditions that have been in place since the start of the war.

Juice continues: “Our towns at night are almost totally dark. You need to use your GPS navigation to understand whether you have any settlements or towns around you, just to understand where you are, especially during bad weather, like now. There is only instrument flight conditions and you’re not able to see anything below you.”

While Karaya shot down those two drones, he’d had to get very close to do so successfully. “Unfortunately, our missiles are not capable of engaging these types of targets at greater distances,” says Juice. “It’s only a few kilometers, depending on altitude and speed. In that particular case, unfortunately, the explosion was too close to his jet and the pieces of the missile and pieces of the Shahed hit the front of his jet, damaging the radome and the canopy.” At the same time, damage to the horizontal stabilizers left Karaya’s jet uncontrollable in pitch, which, combined with a fire in the cockpit, forced him to abandon the MiG, after he’d managed to make a roll and turn away from a village in his path.

Fragments of the canopy left Karaya bloodied, but Juice confirmed his injuries were minor and he’s currently in good shape. After passing some more medical checks, “he’ll be ready to go to kill more Russian shit in the air.”

Juice also recalls how he was deployed to Karaya’s airfield just hours after the ejection. “I even slept on his bed. So yeah, now I can say that I slept in the bed of a Hero of Ukraine!”

As for the MiG’s weapons options against the Shahed, these are also fairly limited. The heat-seeking R-73 (AA-11 Archer) air-to-air missile doesn’t work in clouds, while the radar-guided R-27R (AA-10 Alamo) offers more range in theory, but the limitations of its seeker mean pilots still have to approach ‘danger close’ to the drones. The 30mm cannon is an option, too, but only in daytime and clear weather.

Juice is not quite sure of the reason, but the Shahed attacks have trailed off somewhat since October, although he refuted the reports that claim these drones are unable to operate effectively in winter conditions. In fact, they have some limitations when humidity is higher and temperature is around zero, which can lead to icing. But when the temperature falls — it’s currently around -5° Celsius, or 23° Fahrenheit — this is not a problem. Broadly speaking, Juice says Shahed sorties are only around half what they were in October, which could relate to depleted stocks or a change in tactics.

The Shaheds have been a particular headache for Ukraine’s ground-based air defenses, too, since there is no realistic possibility of achieving persistent and effective radar coverage optimized for these hard-to-detect and even harder-to-shoot down threats.

One solution has been to establish visual surveillance posts, as well as an alert app that allows civilians to submit drone warnings. More mobile fire groups have also been established, to engage the drones using heavy machine guns, cannons, and man-portable air defense systems (MANPADS). “It’s pretty effective because they are spread around the country, and they have good readiness as our command-and-control network is warning them,” Juice explains. “Of course, it’s still very difficult with such a large territory, but everyone has strived to do their best.” Recently, The War Zone examined how Ukrainian teams are hunting Russian drones with the help of rifle-like systems equipped with military-grade laser pointers, as well as thermal optics.

For all the successes of the new ground-based air defense systems and Ukraine’s fighter force so far, Juice and his compatriots are keenly aware that Iran’s backing of Moscow’s war means that delivery (or even local production) of more Shaheds and other ‘suicide drones’ is likely. At the same time, Russia is still producing its own missiles, even if only in limited numbers, and there are also growing fears that Iranian-made ballistic missiles could also soon be in Russian hands. In other words, the skies over Ukraine are anything but safe and could bring greater danger in the near future.

With all this in mind, in the concluding part of this interview, Juice discusses other missions — including suppression of enemy air defenses — and the changing nature of the Russian threat, as well as the prospects of the Ukrainian Air Force finally getting the new fighter aircraft and other weaponry it badly needs.

The post Inside Ukraine’s Desperate Fight Against Drones With MiG-29 Pilot “Juice” appeared first on The Drive.