Israeli Black Hawks Escort Marine One In These Stunning Images 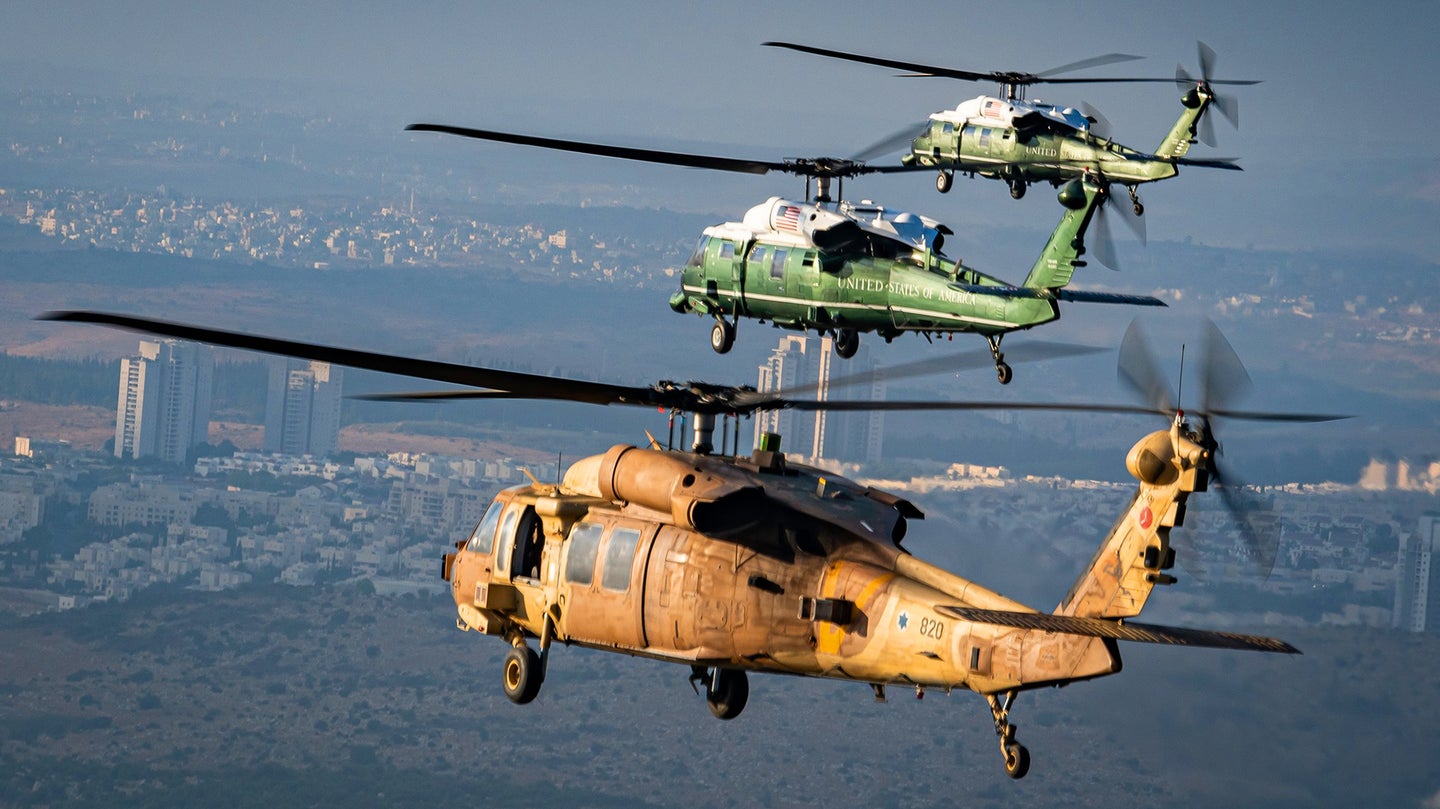 The skies over Jerusalem were recently graced by a unique formation of at least 10 Black Hawk helicopters. The formation was carrying VIPs, staff, press, and counter-assault teams traveling with President Joe Biden, who was flying in a U.S. Marine Corps VH-60N “Marine One” helicopter.

Flown by Marine Corps Helicopter Squadron One, or VMX-1, the pair of highly specialized presidential support “White Hawks” were joined by eight other Black Hawks — a mixture of U.S. Army UH-60Ms and desert camouflaged Israeli Air Force (IAF) examples known locally as “Yanshuf,” or Hebrew for owl — in a ribbon of rotorcraft that overflew both the city and hills surrounding Israel’s historic capital of Jerusalem.

Photos of the event posted to the Israeli Air Force’s Facebook page on July 18, show a pair of VH-60N presidential support helicopters on the tarmac with the other Black Hawks, including those from the 124th Squadron at Palmachim Airbase along central Israel’s Mediterranean coast.

Once airborne, the formation is seen flying over Jerusalem in a long line with the U.S. helicopters, distinctive with their white-topped green fuselages near the rear. An Israeli UH-60, in desert-toned camouflage and a Star of David roundel, brings up the rear of the formation. A couple of other similar sand-and-tan colored IAF Black Hawks were also part of the operation, but are out of frame.

The same VH-60Ns were seen in Bethlehem with the Army UH-60Ms nearly two weeks ago now preparing for Biden’s arrival, as seen in the videos below.

Israel was the first stop on Biden’s four-day tour of the Middle East that also took him to Saudi Arabia in an effort to assert the U.S. presence in the region after its pullout from Afghanistan. Noted in the images are the white covers over countermeasure dispensers below the aircraft’s engine exhausts. Usually covered by green plates, are often loaded during overseas trips and especially those in the middle east, in general, as appears to be the case here.

The formation flight would be a fitting retirement bow ceremony for the VH-60N, which is scheduled to begin leaving HMX-1’s “White Top” fleet in the current fiscal year. They and the venerable VH-3D will be replaced with the Sikorsky VH-92 Presidential Helicopter as soon as the White House Military Office deems the aircraft fit for carrying the president on both normal missions and time-critical contingency operations. A pair of ‘Marine One’ capable helicopters travels with the president nearly wherever they go, both at home and abroad, even if the motorcade is used instead. They are often there to be ready to rush the president to safety dozens or even hundreds of miles from their location during an emergency and for other contingency operations that the motorcade is not ideal for handling.

Biden likely will be the final president to fly in the VH-3D, too, which has been in service since 1978. President Donald Trump was almost certainly the last U.S. commander in chief to ride the Sea King to retirement.

The post Israeli Black Hawks Escort Marine One In These Stunning Images appeared first on The Drive.