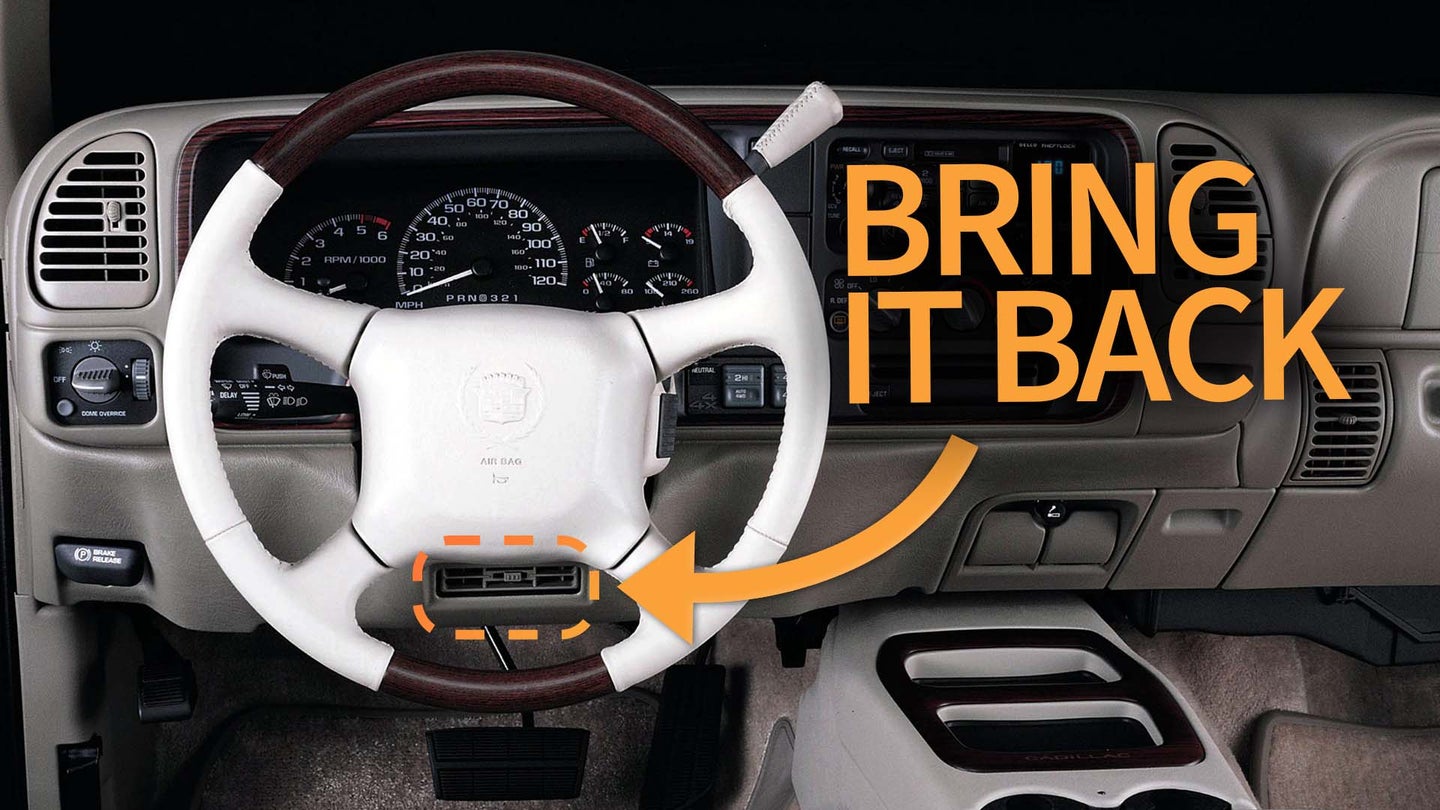 If you’re reading this right now in the northern hemisphere, there’s a good chance you’re miserable. Heat waves are smashing records across the globe this summer, with my own city of Austin already having more days over 100° F in 2022 than on any year on record, per KXAN. It’s only July! The year ain’t even halfway over yet! Worst of all, it’s a prime recipe for crotch sweat, one of the least pleasant and most persistent forms of sweat out there.

Frankly, it’s enough to make you want to saw open your car’s dashboard and route in a crotch vent for the aircon, as one enterprising ToyotaNation forum member did after realizing that his Corolla already had a blank spot for it. Crotch vents used to be a thing across numerous makes of cars, from full-size Chevy trucks to Dodge Caravans and even the beloved fourth-gen Supra and FD RX-7, and it baffles my mind as to why they went away.

In case you’ve missed out on this infinitely practical feature, let us explain. The crotch vent is an HVAC opening that’s strategically placed underneath the steering column on a dashboard. You can aim it straight between your legs on a hot day, and it’s brilliant. While modern-day seat coolers can help do away with some of the sweat under there, that front-facing dashboard vent simply did a far better, more direct job of drying up that unpleasant between-the-legs sogginess that doesn’t make direct contact with the seat.

Demand for this particular form of swamp-crotch relief clearly hasn’t waned, if decades worth of various forum threads asking about the crotch cooler are worth anything. Recently, the Unnecessary Inventions channel on YouTube built a device called the Jewel Cooler for a current-gen Bronco. Instead of adding a standalone extra vent, the Jewel Cooler clips onto an existing dashboard vent to route air through a tube that sticks up into the bottom of the driver’s shorts.

To me, this is just further proof that the good ol’ vintage-style crotch vent needs to make a comeback. For one, the Jewel Cooler takes all the air from a vent that’s just as needed elsewhere to cool off your face and/or armpits. Secondly, while the visual is pretty funny for YouTube, people naturally tend to assume you’re up to something lewd whenever they see you stick anything up your shorts. No one wants to have that conversation with some nosy stranger, especially if you’re already suffering through a sweaty crotch.

Worst of all, you can’t use the Jewel Cooler with long pants since there’s no way for it to really route it where it needs to go without that mid-thigh shorts opening. Not all of us have the luxury of being able to wear shorts everywhere, you know. Jeans in particular are the worst offenders when it comes to a sweaty crotch, as even the comfiest, most broken-in denim starts to feel more like lumpy cardboard covered in thick-grit sandpaper if you’re sweaty enough. Some pants are like a sponge that just keeps sweat there long after the rest of you has cooled off, so alleviating the sweaty crotch problem requires drying your sweaty clothes, too. It’s exactly the kind of chafe-prone issue a good crotch cooler has to address.

It’s time to go back to basics for one of summer’s most pressing problems, and soon. All a crotch cooler is at its heart is one more opening for the HVAC and the ducting to direct air there. Extreme weather events are becoming more frequent according to the climate researchers at NASA, and that includes all of summer’s worst, like heat waves, droughts, and wildfires. Sure, most of us can’t personally halt the deforestation of the Amazon or clean up the worst polluters that are exacerbating the problem. Yet we could at least cope with the next record-breaking summer a tad better with a simple, discreet junk-level aircon vent whenever we have to leave the house. Bring it back!

Got tips, questions, or a festive holiday recipe for schweddy balls? Email the author: [email protected]

The post It’s Time for A/C Crotch Vents in Cars to Make a Comeback appeared first on The Drive.