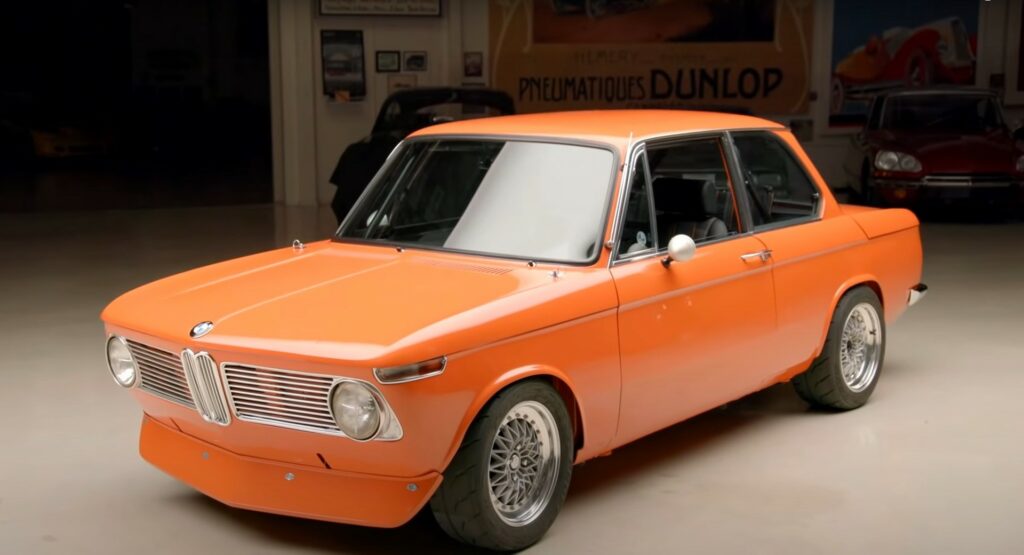 The BMW 2002 is a historic car for a number of reasons and it makes for an excellent restomod candidate too. One example built by just a couple of guys has now made its way to Jay Leno’s Garage, and it proves that with a lot of love and some resources, making driving dreams come true really is possible.

Built by 2002 enthusiast Dorian Hicklin and his build partner Shad Essex, it blends historic design details with more power and canyon carving performance modifications. Hicklin has owned 40 BMW 2002s in his life and this particular car is a cruiser through and through. The newly-finished engine hasn’t been dyno’d yet but he thinks it’ll make 150ish horsepower.

That’s less than a new base Honda Civic but this BMW is considerably lighter at about 2,150 pounds. It’s also so clean that you could almost eat off of any surface in the engine bay. Inside the cabin, the carpet and rear seats are long since departed. Cloth inserts in the seats are just about the only real soft-touch materials included.

The dash is a modified CSL unit with a functional glove box and other small touches like drilled pedals and a drilled gear shift knob complement the theme. Dual fire suppression systems keep this car almost completely conflagration-proof.

The entire car is suspended by Ground Control and Koni components that are set up with just enough stiffness to make canyon carving comfortable. Thick sway bars punctuate each set of shock towers and a beautifully finished fuel cell adds a layer of safety and practicality.

Around the 23:28-minute mark, Leno actually kills the car and Hicklin explains that it’s “not a full race clutch, but I went one under that”. Updated E12 BMW brakes help bring the car to a stop and Leno seems to really like the experience as a whole. “I’ve been wanting to do one of these for a long time but haven’t found one I liked,” he tells Hicklin.

Many of us gush over incredible restomods from big-name tuning houses but it’s great to see that a couple of guys with a bunch of passion can build a car so well that Jay Leno himself would pick it over others to feature.