Jay Leno Is Headed Home From the Hospital 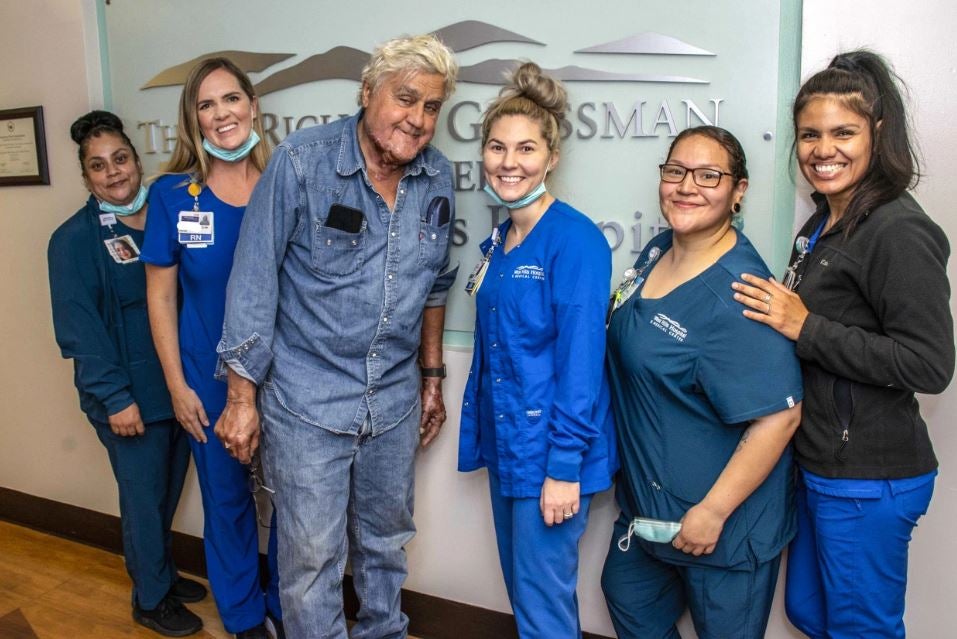 Famed former talk show host and noted car collector Jay Leno has been discharged from the hospital after receiving treatment for burns inflicted in a garage fire.

NBC reports the celebrity checked out from Grossman Burn Center on Monday afternoon with a good prognosis, having spent more than a week there for treatment. A photo shared of the 72-year-old posing with medical staff shows visible skin grafts on Leno’s neck, with the burns themselves reportedly extending to parts of his face, chest, and hands.

Leno was reportedly burned last week working on a 1907 White Steam Car, one of the many cars in his vast collection. Leno was reportedly doused with fuel when a clogged fuel line unclogged, and a nearby spark ignited the fuel. Burns resulting from the fire were reportedly third-degree and could have been much worse had they not been smothered by a friend who was present at the time of the fire.

“Jay would like to let everyone know how thankful he is for the care he received, and is very appreciative of all of the well wishes,” the Grossman Burn Center said in a statement. “He is looking forward to spending Thanksgiving with his family and friends and wishes everyone a wonderful holiday.”

“I am pleased with Jay’s progress, and I am optimistic that he will make a full recovery,” added Dr. Peter Grossman, the burn specialist who oversaw Leno’s treatment.

Leno’s status as an icon of car culture stems from his extensive collection of over 300 vehicles according to DuPont Registry, including everything from steam-powered Doble to one of the few remaining Chrysler Turbine Cars, and his broad base of automotive knowledge. He hosts his show “Jay Leno’s Garage,” which is now in its eighth season.

The post Jay Leno Is Headed Home From the Hospital appeared first on The Drive.