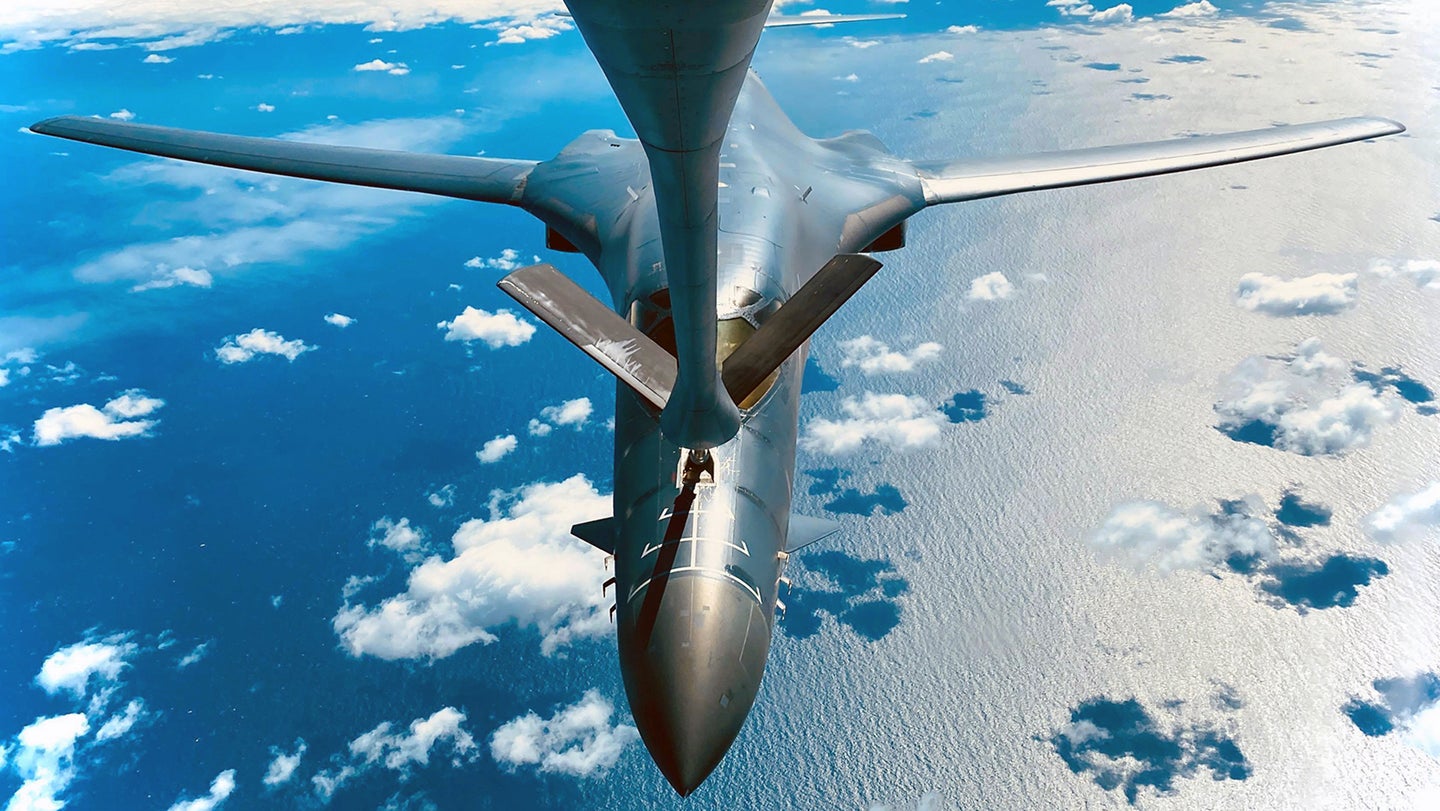 The U.S. Air Force has confirmed that an incident on Saturday that left a KC-135 aerial refueling tanker with its boom broken and prompted an emergency landing at Yokota Air Base in Japan, also forced a B-1B bomber to divert to Andersen Air Force Base on Guam. Both aircraft were able to get on the ground safely at the respective bases and there were no reported injuries as a result of the incident.

The incident, details about which remain limited, appears to have occurred somewhere over the Pacific Ocean east of Japan on the morning of September 10. Plane spotters using online flight tracking software noticed one of two B-1Bs break away from its wingman and appear to head toward Guam sometime before 9:00 AM local time in Japan. The bombers, callsigns Mayan 21 and Mayan 22, were conducting a long-range Bomber Task Force mission in the region. Mayan 21 was the particular bomber that headed to Guam.

The KC-135 tanker involved in the incident, a T variant with the serial number 60-0344, callsign Pearl 11, was also then tracked as it headed toward Yokota and declared an inflight emergency, which turned out to be the broken boom.

“We can confirm that a B-1 from the 28th Bomb Wing, Ellsworth AFB, SD, diverted to Andersen AFB due to an air refueling incident with an 18th Wing KC-135 during a Bomber Task Force mission,” a spokesperson for Pacific Air Forces (PACAF), the Air Force’s top command in the Pacific, told The War Zone in a statement. “The B-1 landed at Andersen AFB and the KC-135 landed at Yokota AB without incident. No injuries were reported. An investigation will determine the extent of damage to both aircraft.”

The KC-135T tanker definitely sustained at least some damage to its boom. Plane spotters in Japan caught the aircraft as it arrived at Yokota with the boom stuck in the downward deployed position and the hoist cable clearly broken. The boom was dragged along the runway kicking up sparks as the tanker landed.

No pictures or videos appear to have emerged so far showing the B-1B following the incident, before or after it arrived on Guam.

Incidents where tankers land with their booms deployed are very rare, but this one does come just weeks after a KC-46A Pegasus tanker with a congressional delegation on board had to make an emergency landing at Joint Base McGuire-Dix-Lakehurst in New Jersey after its hoist cable snapped, leaving the boom stuck in the deployed position. You can read more about that mishap here. They are not related, of course.

All told, it remains to be seen what additional details might now emerge about exactly what happened between the KC-135T and the B-1B, and how damaged either aircraft was left as a result. Aerial refuelings, by their very nature, are not without risk, although they occur routinely around the world every day. Thankfully, in this case, nobody was hurt and both aircraft made it home safely.

The post KC-135 Boom-Down Emergency Landing Was Result Of Incident With B-1 appeared first on The Drive.